Have you ever heard about a sportsperson who turned himself into a Peurto Rican manager? Oh, not to forget, being a club manager and coach also comes in between. He is a three-in-one fellow who has mastered taking along three professions mirthfully.

Let’s cut this straight; we are talking about none other than Alex Cora, a former baseball player, Boston Red Sox manager, and a Peurto Rican manager. He has given his fourteen precious years of life to MLB. That’s more than a decade here.

Alex has remained successful in clinching World Series Champion Trophy three times. And also served as a coach to Houston Astros. That’s a lot to count on his achievements, and more is yet to come. What is his life like? How did he end up becoming a Boston Red Sox manager? What is his rate in the baseball industry? We shall figure out all of this from his unknown past to present success stories.

But before that, let’s take an easy to go quick facts about the multi-talented person, Alex Avora.

On October 18, 1975, Alex was born to his parents, Jose Manuel Cora and Iris Amaro, in Caguas, Puerto Rico. He grew up alongside his brother, Joey Cora, ten years older than him, and sisters Lydia and Iris. Baseball was his all-time food while growing up; he considered the sport as breakfast, lunch, and dinner, says his childhood coach Kiko Cordero.

His father, Jose, passed away due to colon cancer when Alex was just thirteen. Jose was a mentor in the little leagues in Puerto Rico. He was the reason Alex fell in love with baseball.

After his father’s death, Joey took all the responsibility of home on his young shoulders.

Not to mention, Joey is another baseball infielder who performed for four major squads, including San Diego, the Chicago White Sox, Seattle, and Cleveland. As of now, he serves as a coach for the Pirates.

His mother, Iris, worked as a school secretary. He also credits his mother in his bringing up as a solitaire player. Moreover, Alex went to Bautista High School in Caguas and graduated in 1993.

Lydia and Iris, his sisters, are busy with the work at Church and community serving as leaders.

Joey Cora had an astonishing 11 years career at MLB. He held the position of second baseman playing for San Diego Padres of the National League and the Seattle Mariners, Chicago White Sox, and Cleveland Indians of the American League. The San Diego Padres had drafted him in the first round of the 1985 MLB draft. He last played for Cleveland Indians which was very minimum due to injuries.

Moreover, he later dealt a free-agent contract with the Toronto Blue Jays but retired without playing any game with the team.

His coaching career began in 2003 with the Chicago White Sox. He has been mentoring and coaching the Pittsburg Pirates since 2017.

He was already selected for the 1993 Major League Baseball draft by the Minnesota Twins in the twelfth round but opted to play for the University of Miami.

During his time at Miami, Alex was titled to the College World Series all-tournament team in 1995 and 1996. Although they lost the title to  Louisiana State University, they won the title in 1996.

Baseball America rated him the best collegiate defensive player entering into the 1996 First-Year Player draft. Following that, the Los Angeles Dodgers hired him in the third round in the 1996 entry draft. He was then soon traded to play for the minor league, Vero Beach Dodgers.

Alex kicked off the 1997 season with San Antonio Missions appearing in 127 games. He was also enrolled to play some parts in 1998, 1999, and 2000 seasons with  Albuquerque Dukes appearing in 191 games altogether.

He was lucky enough to make an early debut in MLB major league on June 7, 1998, with the Los Angeles Dodgers against the  Seattle Mariners.

And, guess what, his brother, Joey, played as the starting second baseman in the game.  He performed with the Dodgers for the next seven seasons playing in a total of 684 games. That’s a huge number of games again.

Alex served mostly as a shortstop in both the 2000 and 2001 seasons. He also played as a second baseman for the Dodgers.

Alex appeared as a free agent with the Cleveland Indians in 49 games for the  2005 season.

He played in 83 games for the 2007 season. Alex kept playing for the Bostons for the regular four seasons until he was signed as a free agent on October 30, 2008.

They were opting to extend the contract for the 2011 season, but unfortunately, that did not happen.

Alex again dropped back to signing with the minor league, Texas Rangers, on August 17, 2010. He was placed in Oklahoma City, where he played in 6 games. Later, he performed for the Rangers in four games and was awarded an AL Championship ring.

Alex popped up for the Washington Nationals in 91 games for the 2011 season. His last MLB performance was on September 28, 2011, with the Nationals against the Florida Marlins.

Alex played winter baseball in Puerto Rico for the rest of the 2011 season. After which, he thought of retiring from winter baseball. Later, he went on signing a deal with the Cardinal on February 5, 2012. 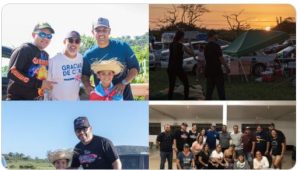 Wrapping up his playing career, Alex switched to coaching and managing on November 15, 2016, when he opted to take a coaching job for the Houston Astros.  With the Houstons, he went on clinching the World Series Championship trophy for the second time.

Alex then moved on with his managerial job in 2017 for the Boston Red Sox. He eventually signed up for a three-year contract with the Bostons starting from 2018 and became the 46th manager.

He won the World Series Championship with the Bostons for the third time overall.

Moreover, while taking up the Bostons’ job, he did not ask anything but a good amount of donation to Puerto Rico after the hurricane that ravaged the Island regardless of asking for a salary, infringement, and other benefits.

Alex also served as a color analyst for  ESPN and ESPN Deportes from 2013 to November 2016.

Coming to his personal life section, Alex’s personal life is as liberating as his professional life.  He was previously married to Nildamarie Leclere’s-Vazquez, aka Ninda.

With her, he has a beautiful girl child, Camila Cora, who is fourteen years old by now and is really important to him in his life.

Also, Ninda has a son from her previous relationship, Jeriel. Again, Alex is quite close to him too. However, we remain unknown for the reason they parted their ways.

Talking about his current relationship status, Alex is well set to get married to Angelica Feliciano, with whom he shared twin children, Xander Gabriel and Islander Manuel who were born in July 2017. Alex Cora with his family

Alex was joined by his fiance and twin kids on the field in 2018 while winning the ALCS and American League pennant.

Angelica has a brother named Jesus, who is also a baseball player for the Dodgers, the Washington Nationals, the New York Mets, and the Tampa Bay Rays and is close to him.

Besides his private affairs, there is one more interesting point to add, Alex is bilingual; he can speak both the Latino and American languages. Alex Cora had indulgence in the 2017 Houston Astros sign-stealing scandal which led to a World Series title.

Cora was not the mastermind but he accepted his part in the ill work. He served as the bench coach for Hoston Astros then.

In fact, he was at the forefront, creating the system to steal signs partnering as a key actor with Astros players Carlos Beltran.

Cora had arranged for a video room technician who installed a monitor that displayed the center field camera feed outside of the Houston Astros’ dugout.

The MLB did not allow a center field camera at that time. However, it was permitted to use for player development purposes under MLB rules before while.

Cora and the team used a monitor near the clubhouse so that they could decode the signs. They then banged on a trash can aiming to relay messages to their hitters.

Cora is quite popular among the trollers and memers. After his cheating scandal, his memes were widely shared on social media. Alex has already notched the World Series Championship Trophy three times, once as a player and twice and thrice as a coach and manager. This accomplishment headline is enough to boost up his level in the baseball industry.

Alex is a fine coach, a fine player, and a fine manager that the industry can ever have. Apart from that, his bilingual talent adds up to his leadership skills.

By god’s grace and his hard-work, Alex has managed to live an extra lavishing life with his family.

According to online sources, he has lately inked a contract with the Bostons, which pays him an annual salary of $8,00,000.

AND, ALEX CORA IS ASSUMED TO HAVE AN ACCUMULATED NET WORTH O $8 MILLION AS OF 2020.

Other than that, Alex owns a housing property at Chestnut Hill worth $902,600 and also owns a list of branded cars.

Additionally, Alex also had to pay a good amount as alimony to his ex-wife to settle the divorce. Though, we are still deprived of the amount in figures.

We surely can catch Alex on Instagram and Twitter. His social media handles are flooded with family pictures. He clearly depicts the fact that he is a proud father of four through his social media posts.

Alex also shares his love for his hometown and his parents.  He has 647 posts on his Instagram handles, which shows how much he is obsessed with keeping his fans intact with his random posts.

Explore more about him by giving a follow on his Social Media Handles. And we can bet that all his posts are worth a stare at, completely cherishable awaiting for your likes, comments, and follows.

What does Alex Cora have to do with the Detroit Tigers?

The Detroit Tigers considered hiring Alex Cora and A.J. Hinch for their managerial vacancy while both of there were suspended from MLB after the 2020 World Series.

Why was Alex Cora suspended from the MLB?

Alex Cora had indulgence in the 2017 Houston Astros sign-stealing scandal which led to a World Series title.

Cora and the team used a monitor near the clubhouse so that they could decode the signs. They then banged on a trash can aiming to relay messages to their hitters.