Does anyone out there remember the Monmouth player who built millions of viewership with the trick shot skills in 2011? You must have an idea of him if you are an NFL follower.

We are talking about Alex Tanney, who almost has been breaking all the records since his college days for most career touchdown passes and most passing yards in NCAA Divison-III history.

To brief, Alex Tanney is an American football quarterback who currently serves as a free agent. Prior to that, he played as a quarterback at Monmouth College. And since then, he always fostered doing more than hit goalposts.

Not to mention, Alex was the winner of the Milberger Award, which is provided annually to deserving US college players in 2009. His achievement stories are not only limited to this. There are more to come yet. 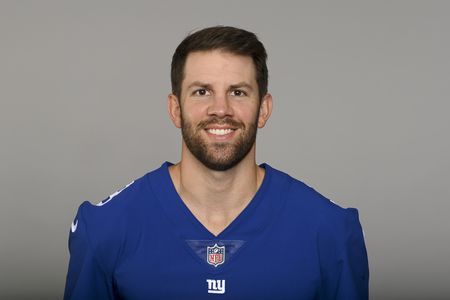 If you really want to know about all the clubs he has played for and his net worth and personal life. You have come to the right place because this article is prepared with a motto to lead you with details.

But before that, let’s dive into easy peasy quick facts about the quarterback, Alex Tanney.

Starting with fundamental details, Alex Tanny was born on  November 11, 1987, in Lexington, Illinois, to his parents, Don Tanney and Crystal Tanney. He has two brothers named Matt Tanney and Mitch Tanney. As a kid, he used to play both basketball and baseball. According to Alex, he is more of a basketball player but turns out to be a quarterback. He loved eating pasta along with spaghetti and meatballs from the early days of life.

Not t mention, Alex’s quarterback skills come from his athletic family. Don, himself, remained a teacher and a head football coach in his career to talk about his father.

He spent his twelve precious years at Lexington and led the team to nine successful playoffs and a second-position end at state in 2001.

He soon established himself as the quarterback coach for the defunct Peoria Pirates in 2006.

His brother, Matt, played college football after attending  Minuteman.  And Mitch was a perfect quarterback for the Monmouth Scots and subsequently got enrolled in the af2 league with Alabama. According to his father, Mitch is more instrumental.

And after knowing it all, we can admit that football runs deep in the whole family.

Alex remained a three-sport high school athlete at Lexington High School in Lexington, Illinois. He was a first-team Illinois All-State quarterback two times.  He headed his team to a second-place finish in the IHSA state championship.

Alex was also entitled to an All-State basketball player and is the ever-lasting leading point scorer in Lexington High School history.

After all the record-breaking movements in high school, Alex was all set to hit new levels at  Monmouth College.  He broke the Monmouth record to score more than 50 touchdown passes in his sophomore year in 2008.

Following that, with his 3,856 yards and 44 TDs, Alex was announced as the  Melberger Award winner.  As told earlier, he was breaking the record for scoring touchdown and yards, which no other players in Divison III did.

Alex was redshirted for the 2010 season due to an injury; he made a remarkable comeback in 2011, where he scored career-high 3,867 yards with 38 touchdowns.

He received three Midwest Conference Offensive Player of the Year Awards and many more All-American Awards.

Here comes the most talked about news of him, when he became the finest youtube sensation in 2011. He was a celebrity who broke the internet with his trick shot video, which has almost crossed more than 1.6 billion views.

Alex became a popular guy who could throw a football from a living room window or the distant basketball hoop; he could throw the ball in a different position, angle, and style.

Moreover, he got featured in History Channel’s Stan Lee’s Superhumans episode where he was bulletined as “superhuman,” Also, comparisons were held between him and Johny Mac.

Alex again set the record for all-time all-division career touchdown passes with 150 in a game against Carroll University. He held the most passing yards record with 1429 in NCAA D-III history.. ”

Alex took an undrafted free agent post and inked a contract with the Kansas City Chiefs in June 2012. However, he was placed on the disabled list because of his finger injury on September 1, 2012.

After being benched out for a year, he was hired to roster position by the Cowboys. Alex took over the entire second half of the Hall of Fame Game in Canton, Ohio, on August 4, 2013.

He played for the five preseason games in 2013 and, lastly, was waived on August 30, 2013. Further, he was posted to the Cowboys’ eight-player practice team.

The Cleveland Browns hired Tanney off the Cowboys’ practice squad in November 2013.

In addition to his professional career, Alex was involved with teams like Tennessee Titans,  Buffalo Bills, Indianapolis Colts as a practice squad member until 2015.

Alex was signed as an official player of the Colts practice squad on December 21, 2015. He hit the ground on January 3, 2016, against the Indianapolis Colts. He was again passed to the practice squad on September 14, 2016.

Alex was also leveled to the roster spot but soon got placed on the injured list in September 2017.

It’s not that Alex has wrapped up his career. We can still expect a ninth season from him.

Tanney in the football match is a treat to watch. You can watch his career statistics on the website of football-reference.

Coming to his private life section would sound unhealthy not to address his beautiful wife, Rebecca Gillen, an inseparable part of life. Yes, you read it right.

Our mastermind quarterback, Alex, is currently married to his long-time girlfriend, Rebecca, another local sports standout.

Moreover, they share two lovely kids together. Gunnar is three, and Wyatt is one. As of now, they are living happily ever after. Everything is going well in their life. There is no such news of any separation or extra-marital affairs with anyone.

Other than that, there are some minor details about him like, Alex never wears a watch. Even if he is gifted branded watches like Cartier, Hublot, or Rolex. He would not be that willing to carry. He was given once in his time with high school but never wore it.

Alex took up the battle with his partner, not on the field though this time for his sister-in-law Julia Tanney, who has been diagnosed with multiple sclerosis. As per the news, she was a wheelchair user, trying to exercise, and eat nine cups of veggies daily. 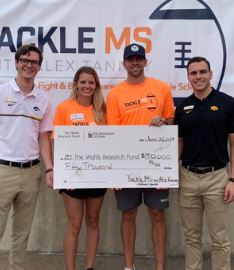 Julia, with her husband Matt, shares two adorable twins, Lillian and Katelyn.  The duo is a member of St. Paul’s Catholic Church and keeps joining the athletic events at Western Illinois University.

Alex, with his wife, has decided to show their support, having found the Tackle MS with Alex Tanney Fund.

The fund will add some motive to the organizations that work for the patients suffering from multiple sclerosis cases, like the Terry Wahls, M.D. Research Fund.

No doubt, after his trick shot video, he went viral over the night, and later Alex went on grasping new roles and opportunities to strengthen his career.

Although he is not on for his NFL season currently, we can bet that he must have added plenty of sum to his bank account.

Aligning with the online sources, Alex  Tanney was agreed to the deal with  New York Giants, which provided him with an annual salary of $1,075,000. Although, later, he was out of the team.

And to mention on his net worth, we cannot be accurate but yes,

ALEX TANNEY HAS AN ACCUMULATED NET WORTH OF AROUND $2MILLION AS OF 2021.

Moreover, he has remained quite outspoken to buy his dream car, R8 Audi. Hopefully, he will turn his dream into reality soon.

Alex Tanney retired from his nine years long career at NFL in 2020-2021. The New York Giants replaced Tanney with Colt McCoy in 2020.

However, he signed the practice squad for the final month of the season. He spent most of the past three seasons playing for the New York Giants as a backup quarterback.

But there’s a major sad part. His Instagram account is private. We cannot really peek into his posts.

However, Alex has a moderate fan following on Twitter and Facebook. We surely can give him a follow on that. And how about flooding his text box with belated birthday wishes. However, it’s fifteen days late.

As of now, Alex Tanney is back in his hometown Bloomington, working out at the Bloomington-Normal Athlete Factory, regularly throwing to any college or high school receiver. He never leaves the spot where he finds sports.