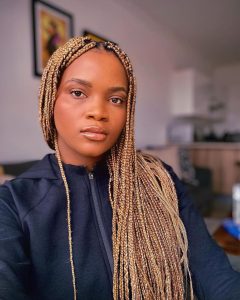 Amanda Faku (born 28 May 1993) best known by her stage name as Ami Faku is a South African musician, performer and songwriter. Born and raised in township of Ezinyoka, Port Elizabeth, Faku rose to fame as a contestant on The Voice SA season 2 in 2017 and began getting recognition in the music industry.

After she signed a record deal with The Vth Season, Ami released her debut single “Ndikhethe Wena”, which was released on her debut studio album Imali (2019), debuted number one in South Africa.

At the age of 6, Faku had developed a strong love for music. She started singing at a house church which her father pastored and is influenced by the church, reggae, and hip hop. She later started recording music in early 2012 where her producer only lived a few blocks away from her house.
In 2017, she competed in the TV talent show, The Voice SA, which was her major breakthrough in the music industry. Though she did not win, she was signed by the Vth Season record label.

Following her success on The Voice SA, she launched her debut single titled “Ndikhethe Wena”. Faku later worked with De Mogul SA on the song “Ungowam”. On January 31, 2020, single “uWrongo” by Prince Kaybee was released features Ami Faku, Shimza and Black Motion. She also collaborated with the award winning producer Sun-El Musician on her song titled “Into Ingawe”, certified 3x platinum by Recording Industry of South Africa (RISA) followed by her single “Uwrong” went gold certification on Recording Industry of South Africa. On August 16, 2020, her single “Inde Lendlela” was released. The song later was certified platinum. On September 26, 2020, she released a single “Imali” featuring Blaq Diamond. The song was certified platinum by the Recording industry of South Africa.[12]On September 27, 2020, her debut studio album Imali was released. The album later was certified gold. It was produced by Blaq Diamond, Sun-El Musician, 37MPH Eternal Africa and Wilson. In November 2020, she was nominated for Best Female Southern Africa and Best Newcomer at African Muzik Magazine Awards.
In 2020, she was named as the most streamed female artist in South Africa by Deezer.
On August 21, 2020, she released her EP titled EA Wave Reimagines. On October 31, 2020, her single with Wichi 1080 “Never Let you go” was released. On January 22, 2021, she released a single “Lala Ngoxolo” featuring Emtee.

Ami Faku is currently single and not in any relationship for now. Ami Faku is also not yet married.