Barry Bonds is one of the most familiar names in the baseball world. For 22 seasons in Major League Baseball, Barry played professional baseball as a left fielder.

He has left an outstanding legacy for the San Francisco Giants and the Pittsburgh Pirates.

The seven-time National League’s MVP award winner got an exceptional hitting skill and was always in the top five hitters in 12 of his 17 qualifying seasons.

Some people prefer to call him “King of home runs” due to his record of most career home runs, 762. However, the name is not official. Barry Bonds is playing for the Giants.

Although this may be true that his accomplishments are questioned due to the allegations of performance-enhancing drugs. But the man’s career was a gem in baseball history.

Some may claim that he acquired the talent in his genes as his father, Bobby Bonds, a legendary player.

But his story of polishing the skills he inherited is worth reading. So without further ado, let’s begin with the quick facts.

Born in Riverside, California, Barry is the son of Patricia Howard and Bobby Bonds. His father, Bobby, is a Major League Baseball legend.

Barry played baseball, basketball, and football at his young age while attending Junipero Serra High School. He played for the junior and senior teams for his high school team.

The San Francisco Giants were interested in him and drafted him in the 1982 MLB draft.

But the agreement could not happen as Bonds’ demand of $75,000 did not reach. Consequently, Bonds decided to continue his education and joined Arizona State University.

The ratings increased to .368 on average two years later, and he hit 23 home runs with 66 RBIs. These statistics made him an All-American selection by Sporting News.

Barry had seven consecutive hits in the College World Series in his second year at college, a tied NCAA record.

Regardless of his incredible on-field performance, his teammates did not like him because of his rude and self-centred nature.

In his college career, he played in the amateur Alaska Baseball League once with the Alaska Goldpanners. Besides, he received ASU On Deck Circle Most Valuable Player.

Bonds was in the Pittsburgh Pirates’ MLB draft of 1985. He played in the Carolina League with the Prince William Pirates and was Player of the Month in July 1985.

Bonds made his debut in MLB with the Pittsburgh Pirates on May 30, 1986. In his first year, he played in the centre and started playing left field a year later.

Bonds started dragging fans towards the club with 25 home runs, 32 stolen bases, and 59 RBIs in his second year.

In 1989, he started playing regularly in the main line-up. He finished the season with the league’s second-highest record of 19 homers, 58 RBIs, and 14 outfield assists.

His first MVP came in 1990, with Gold Glove and Silver Slugger. In the National League East title-winning season, he hit .301 with 33 home runs and 114 RBIs.

Pittsburgh won the National League East title in the season. However, he could not impress his fans and journalists. He was once called “Most Despised Pirate.”

Bonds signed a six-year contract worth then-record $43.75 million with the San Francisco Giants in 1993. It is the same club his father played the first seven years of his career and his godfather. Willie Mays spent 22 MLB seasons.

MVP in the first season

Later, in 1996, he hit 40 homers and stole 40 bases in the season, becoming the first National League player and second MLB player to do so.

In May 1998, Bonds received an international walk with the bases loaded with two outs against the Arizona Diamondbacks in the 9th inning.

In the same season, Bonds became the first player with the 400-400 homers-stolen bases record. His 1999 season was hampered by elbow pain and a torn bicep tendon.

Bonds wrote his name in the major league record book as he hit 73 home runs in the 2001 season.

The contract extension with the Giants

Bonds signed a five-year $90 million contract extension with the Giants in 2002. In the season, he hit a career-high .370 average, winning the NL batting title.

Hitting his 600th home run, he also drew a major league record of 198 walks and 68 intentional out of them.

2004 was probably his best season. Winning his seventh MVP Award, he walked 232 times to break his record.

He had a .812 slugging percentage and a record .609 on-base percentage. In the same year, the then 40-year-old became the oldest player to win the MVP award.

Bonds 713th career home run travelled 140 meters into the second level of Citizens Bank Park in Philadelphia against the Philadelphia Phillies in May 2006.

He became the Nations League’s most home-run hitter in September of the same season.

After being tested positive for amphetamines in January 2007, Bonds signed a one-year, $15.8 million contract with the Giants.

In August 2007, he broke the all-time career home run record of Hank Aaron by hitting his 756th home run against Washington Nationals.

President George W. Bush also congratulated him on the record.

Bonds ended his final season with 28 home runs, 66 RBIs with a batting average of .276.

After the 2007 season, the Giants did not extend Bonds’ contract any further. Consequently, he declared himself a free agent in October.

But no club signed him for two consecutive seasons. Finally, in December 2009, Barry said he had played his last MLB game.

During 2015-2016, Barry served for nearly a year as a hitting coach for the Miami Marlins. Later, he became a special advisor to the CEO of the Giants organization in 2017.

Bonds have been speculated on using performance-boosting steroids in games.

He had to face the jury as his trainer, a man of Bay Area Laboratory Co-operative (BALCO), was charged with supplying steroids to athletes.

However, Bonds stated in his testimony that he used the “the cream” and “the clear” drugs unknowingly.

Despite that, the defendants in the scandal did not require to reveal the name of athletes who used drugs.

In December 2011, Barry was found guilty for obstruction of justice and sentenced to 30 days of house arrest.

The incident relates to the investigation during the BALCO scandal when Barry was restrained from a grand jury appearance in 2003.

The 14-time MLB All-Star has been the Major League Player of the Year three times. He has got a record of eight Rawlings Gold Glove Awards and twelve Silver Slugger Awards at outfield.

Bonds received Babe Ruth Home Run Award in 2001. He has led the National League in terms of on-base percentage for ten seasons and on-base plus slugging for nine years.

The two times batting champion has been the home run leader two times.

Barry married Susann Margreth Branco in 1988. After having two children, Nikolai and Shikari, the couple divorced in 1994.

Bonds had to provide $20,000 a month in child support and $10,000 in spousal support to Susann as per her right to share his present and future earnings.

Bonds’ son Nikolai was a batboy at the Giants and always sat next to his dad in the dugout during Barry’s games there.

On the other hand, reports suggest that Barry had a relationship with Kimberly Bell during 1994-2003. 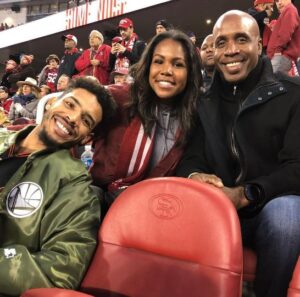 Besides, Bonds married Liz Watson in 1998. The coupled had a daughter Aisha and lived in Los Altos Hills, California.

However, in 2010, Watson and Barry separated with an uncontested divorce without the involvement of the court.

Barry Bonds: Net Worth and Salary

He has been the highest-paid baseball player many times during his time.

CURRENTLY, BARRY BONDS POSSESSES A NET WORTH OF AROUND $100 MILLION.

Barry bought a mansion at Beverly Park in Beverly Hills for $5.3 million in 2000. He sold it for $22 million in 2014. He has owned other real states too. Barry has also made considerable investments in stocks and bonds.

Why does Barry Bonds not appear in MVP Baseball?

To use his name or similar feature in games, a company needs to deal with Bonds, which is a tedious task.

Is Barry Bonds a Hall of Famer?

It has been seven years since Barry was eligible for the National Baseball Hall of Fame induction.

But he is still short of the 75% vote required for induction because of his moral issues.

Barry Bonds has been involved in scandals of drug use during play. Another widespread reason for people not liking him is his standoffish, ungrateful, and self-centred personality.

What is the bat size of Barry Bonds?

Barry Bonds uses a bat size of 34 inches, while it weighs around 32 ounces. All in all, he uses the bat of the C331 Louisville Slugger model.

What is the jersey number of Barry Bonds?

Additionally, back in August 2018, the Giants had retired Barry’s number 25 jersey at AT&T Park.