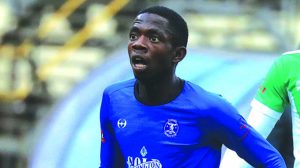 Bill Antonio (born 3 September 2002) is a Zimbabwean footballer who plays as a forward for Dynamos Football Club in the Zimbabwe Premier Soccer League. Antonio became part of the Dynamos senior squad whilst he was still an Upper Six student at Prince Edward High School.

Bill Antonio grew up in Dzivarasekwa.
He did his primary education at Gillingham Primary where he started playing first-team football when he was in Grade Five. Antonio joined Dzivarasekwa Football Academy when he was in Grade Six before Prince Edward came calling for his services when he finished Grade Seven. He also played for Diamond Eagles Academy.
Bill Antonio captained the Under-14 side before being drafted into the senior team three years later, where he was also named skipper. While at Prince Edward, Antonio was also named school athletics team captain. For his Advance Level studies at Prince Edward, Antonio did Literature in English, History and Family and Religious Studies.
He won the Junior League with Dzivarasekwa Academy and was the top goal scorer. Antonio was part of the Prince Edward team that won the Harare Schools Championship in 2017 and 2018.
Bill Antonio featured for Zimbabwe’s Under 20 team, the Young Warriors at the COSAFA U20 Youth Championship
Following his performances at that tournament, he was signed by Dynamos Football Club.
In November 2021, Antonio was incorporated into the Zimbabwe senior men’s football squad that played the World Cup qualifiers away to South Africa and at home versus Ethiopia replacing Macauley Bonne.