For the fans of track and field, Bohdan Bondarenko is not an unfamiliar name. He is a professional high jumper from Ukraine.

He has achieved the highest honors in high jumps, including the 2013 World Championship, 2014 European championship, and a bronze medal in the 2016 Olympics.

Besides his glorious portfolio, he is also well known for his height. At 6’6, Bohdan is one of the tallest high jumpers on the elite diamond league circuit.

Bohdan currently holds a personal best of 2.42 meters that he achieved in the 2014 IAAF Diamond league. This record is the third-best time in men’s high jump of all time as of now.

Bohdan Bondarenko is a successful high jumper from Ukraine

At the age of 32, the high jumper still has many more years to push towards a world record. We can only wait and see if he achieves that.

This article will go through this champion jumper’s early life, career, and personal life. But first, here are some interesting quick facts:

Bohdan was born on 30 august 1989 in the town of Kharkiv in Ukraine. His parents are Viktor Bondarenko and Tetyana Bondarenko.

His father, Viktor, is a former decathlete himself. He has a personal best of 7,500 points and 2.16m in the high jump.

He has dedicated his whole life to track and field. In fact, it was he who encouraged his son to get into sports. Bohdan earlier participated in both long jump and high jump. 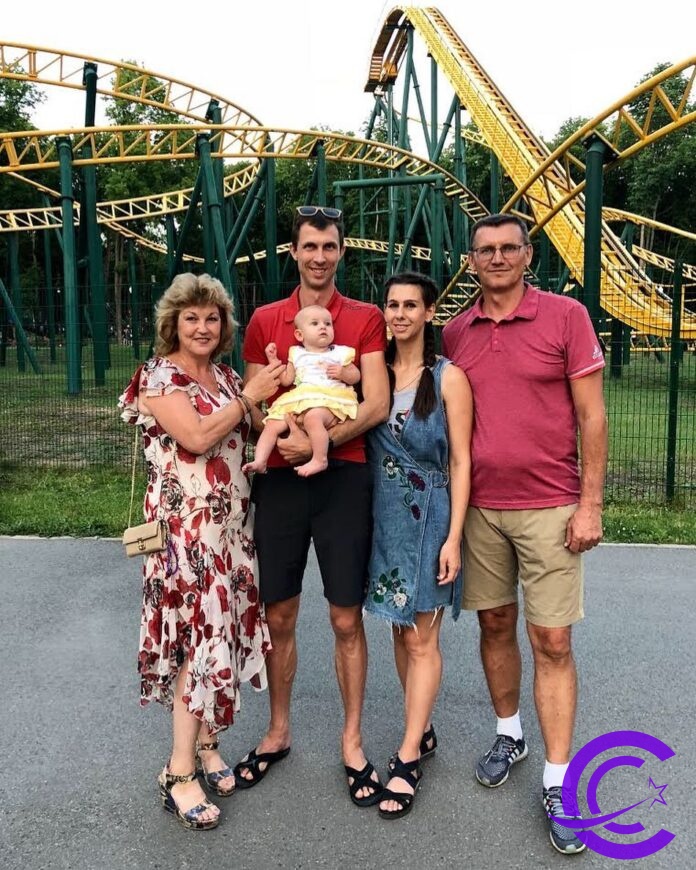 Bohdan Bondarenko with his family

However, even before he showed any interest in jumping, he had his heart set in folk dancing. It was only at the age of 13 that he switched to athletics.

He started his early training with Yevgeniy Nikitin’s group. Only after two months of training, he cleared 1.55m in the high jump. Young Bohdan grew fast too, which helped him a lot during this early phase. By 2004, he had already jumped over 2m.

Viktor still works as a coach of his son, and he has even received awards for being the best mentor.

There is not much information about the family. However, judging from his social media, it seems like he does not have any siblings.

At 6″6′, Bohdan is one of the tallest athletes in track and field. Well, his extraordinary height has helped him highly to take big leaps in the air.

Similarly, he weighs 75 kgs. So, on the first look, Bohdan looks like a tall, lean, and thin guy, but he is a highly trained athlete with an agile body.

Bohdan spends most of his time outdoors, mostly training and competing. However, he has a special training routine that he shares on social media in videos.

Bohdan has spent a significant time of his career getting injured and visiting doctors. He has gone through various surgeries to be able to keep playing. That’s the reason why he takes special care of his workout routine.

After winning the diamond league in Zurich, he said, “I am happy that, even after my surgeries, I did it!.”

His golden rule in athletics is, “It’s much better to overeat than not have enough sleep.”

With the continuous coaching by his father, he started his junior career very early. One of the most notable performances was in the 2006 World Junior Championships in Beijing.

At the age of 16, he was the youngest finalist in the competition held in Beijing. While He jumped 2.14 meters in the qualifying round, he showed a great improvement in the final with 2.26 meters.

In the 2008 world junior championships, he gave another worthwhile performance.

In the cut-throat final competition, Bohdan cleared every height from 1.08 to 2.26 in the first attempt, except for one miss at 2.21. He returned home with a gold medal.

2011 was another impressive year for Bohdan. He won gold at the European U23 championships with a jump of 2.30m. He participated in Summer Universiade in China, where he managed to jump 2.28m, earning gold.

Despite going through multiple injuries in knees, foot pains, and surgeries, he gave some of the most impressive performances of his career during 2013-2014.

It was after 2013 that he rose to prominence in his home country and the whole world. He still fondly remembers the attention he gained from different media. Besides the awards and honors, the Kharviv city authority also promised him a new flat.

Due to that, he felt exhausted even after the season completed. The only vacation he got was three days spent nearby Yevpatoriya seaside.

His first Olympics was the 2012 summer Olympics, where he managed to reach the final but finished in 7th place with a 2.29m jump.

In the 2016 Olympics, he was one of the crowd’s favorite athletes at the long jump. He jumped 2.33m in the finale, securing third place.

Despite winning the bronze, he got pretty disappointing comments from netizens and well-wishers. It is not hard to understand that everyone expected gold out of him.

The athlete tried to justify his bronze with a reason of poor health and cold. Still, the disappointed community believed it was just an excuse for his mistakes and his frivolous attitude towards the performance.

He did not compete in the 2020 Tokyo Olympics.

Bohdan has earned enough from his professional career. He is one of the most successful Ukrainian athletes, so he gets many brand deals and sponsorship opportunities.

BONDARENKO’S NET WORTH IS ESTIMATED TO BE AROUND $1M AS OF 2021.

He has won thousands of dollars as prize money from his victories in national and international competitions.

Besides that, Ukrainian athletes also earn a substantial salary from the ministry of sports and the athletics federation.

Alongside that, the successful athlete has invested some of his money in the right place for future purposes.

‘Track and Field’ is not as big a sport in viewership compared to soccer, basketball, or swimming. However, the biggest names in track and field are recognized very well in their countries.

Similarly, Bohdan is ranked among some of the best athletes Ukraine has even produced. He has been showered with love, respect, and honors for his impeccable contribution to athletics.

Ukraine honored him with an order “for merits III st in 2013 for his contribution to the cultural development of Ukraine and high professionalism.

Similarly, he received an “order for merits II st” in 2016 for achieving high results in Olympics.

He also received an “order for merits Ist” in July 2019 for raising the international prestige of Ukraine.

In 2013, he was also awarded the athlete of the year in Europe.

The national Olympic committee of Ukraine awarded him with the “Best sportsman of the year” title in 2013. In addition, he received 50,00 UAH and a new car as a reward.

Bohdan is married to the beautiful Irina Pimenova since January 2017. The couple has a beautiful daughter who was born in 2017.

Just like her husband, Irina is also a track and field athlete. She competes in triple jump events in national and international championships.

In addition, the athletic lady is the winner of the Ukrainian national championship 2020. Similarly, she works as an ambassador of blue tv sports.

The athlete couple travels together and trains together. In 2018, Bohdan made a fun video of him jumping over Irina, 172cm tall.

Bohdan is a highly private persona and rarely talks or posts about his life. So there is not much information about how the couple met and fell in love.

Sadly, there is also no more information about his past relationships.

Though he is not a heavy user, he has a solid presence on social media. Besides his Facebook and Instagram profile, he also boasts a youtube channel that has garnered more than 800,000 views.

Bohdan started the channel in 2015 to share his performance clips and personal vlogs.

However, it has evolved into a fitness channel where we can frequently see his workout videos.

There is no official news regarding his retirement, but he has not been very active on the track for the past few years. This is most likely to be because of the multiple injuries he has sustained over the year.

He repeatedly stated how it was affecting his life, and it would not be surprising if he had finally decided to take a break from competitions.