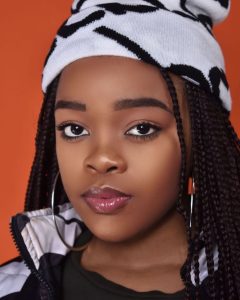 Besides being a talented singer, Boohle has also proven her passion for standing before the camera. She has several beautiful postures, and this is evident in most of her pictures. Boohle has proven that she is made to be in the spotlight and one of those musicians who will write their names in the heart of their listeners forever, nationally and internationally. She is outdoing herself and ready to hit the world with a bang that can not be ignored.

Boohle’s real name is Buhle Manyathi. She was born in the East Rand, in a little township of Vosloorus in Gauteng, but she grew up in Vosloorus, East of Johannesburg. So, how old is Boohle? Well, Boohle’s age is not known, but some reports claim she is 18 years old. Growing up, she went on to learn music professionally. Interestingly, in an age where dolls and toys were a little girl’s best buddy, she founded a musical trio with two of her sisters. After several tests and experimentation with multiple sounds, the musical sensation finally defined her genre, RnB music background fused with Afro Beat, traditional South African Kwaito, and House music. She allied with her longtime producers, Tee-Jay and Elastic, to produce the first complete album, which she released in 2019.

In 2016, she started gaining prominence for her unmatched songwriting skills and has worked with many music producers both as a composer and singer. A year later, the founder of the Tshwane Gospel choir showed interest in her career and brought her on board.

One of Boohle’s songs, Yini Na, reached number one on the South African youth station, YFM’s Hot 99 chart. Her other songs, such as Slala Amulande, shook South Africa and made rounds on radio stations like Jozi FM and Kasi FM. In addition, she made a music video of her first single titled Pleasure, featuring Bergie Fresh and Furleey.

She released another single, Mami Mia, with T-sleek, a Nigerian artist, available on YouTube and iTunes. Additionally, she has shared the stage with A-class musicians of South Africa, including Emtee, Doctor Malinga, and Fifi Cooper.

Boohle’s Izibongo and Umbuso Wabam’nyama are two sensational albums that the rising young artist released in 2020. Surprisingly, both albums quickly became one of South Africa’s most-streamed albums. Boohle’s 2021 songs are all over the place, ranging from features to singles and solos.

The artist has not been seen with a man lately. However, there were rumours at some point that she was dating Josiah De Disciple. This started after the collaboration of their famous song Mama. Another conspiracy theory about them is that the two share a child and their collaborated song’s lyrics speak about them being together.

However, in an interview with Yanos magazine, she noted that there was nothing in between them. Besides reminding everyone that Josiah is married, she also chipped in that Josiah was with someone else when they were working on their EP. At the same time, she cleared the air saying that each of them has their child. So, there is no connection whatsoever.

Does Boohle have a child?

Yes, she does. In fact, Boohle’s child is a boy. She posted a video of her and her son wishing her a happy mother’s day on her Instagram page in May 2021.