In every Olympics, we encounter some amazing moments that create history. Similarly, Caeleb Dressel is a world-class swimmer who has made history that seems unbreakable.

In fact, with back-to-back gold medals in 2016 Rio and the current Tokyo Olympics, it has made Caeleb one of the prominent swimmers of all time.

Yes, the 24-year-old swimmer is returning home with not one but five gold medals, making him the fifth one to do so.

Nevertheless, Caeleb is the current world record holder in the 100m butterfly, the 4x100m freestyle relay, and the 4x100m medley relay. 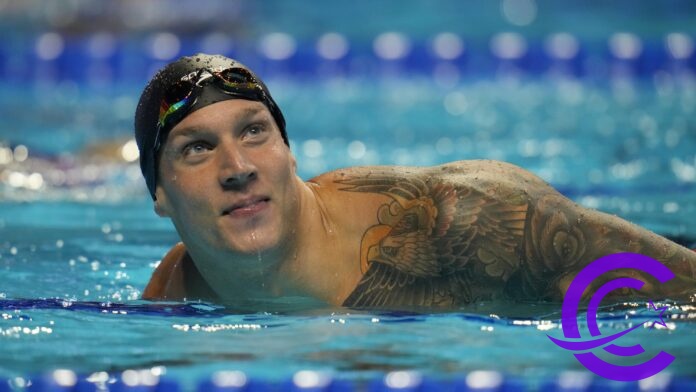 Notably, Caeleb is a world-best swimmer who has won seven gold medals in a single championship, i.e., World Aquatics Championship.

Personal Life: Who is the wife of Caeleb Dressel?

Besides, Caeleb’s glorious and fantastic professional career also has a romantic love story with Meghan Haila.

Actually, Dressel and Haila are college-time sweethearts. They have been in a relationship since their college days.

Moreover, both of the love birds used to represent their college in different swimming tournaments. 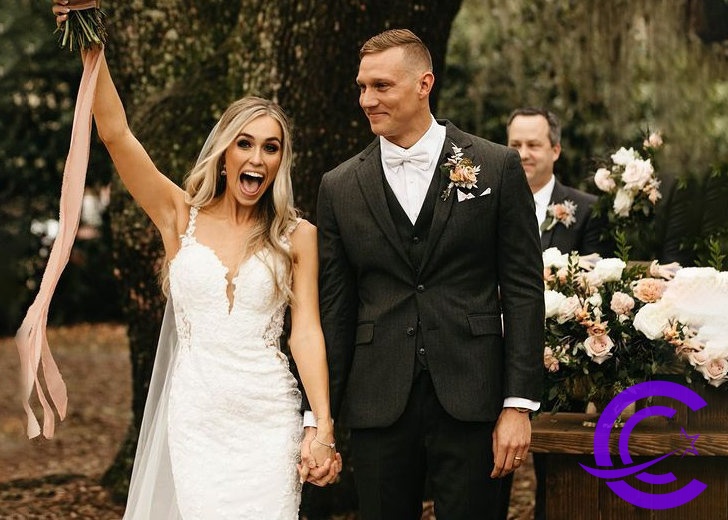 Caeleb Dressel and His Wife At Their Wedding Party

Nevertheless, Caeleb and Meghan were engaged in late 2019, and they were planned for marriage in the same year.

However, due to Covid-19, their wedding was not able to take place. But the couple got married in February 2021.

The six-foot-three-inch tall Caeleb Dressel was previously with the Gator Swim Club.

Meanwhile, Caeleb has also represented Florida College and was coached by Gregg Troy. In his early career, Caeleb trained with Bolles School in Jacksonville.

However, after that, he joined the University of Florida, where he initiated his professional swimming career.

Though Caeleb was not selected instead, he became the youngest male placed 145th in 50meter freestyle.

Caeleb Dressel received the limelight in 2013, where he won six medals in a single tournament.

At the time, Dressel appeared in the 2013 FINA World Junior Swimming Championships in Dubai, where he won the gold medal in 100meter freestyle swimming.

Nevertheless, in the 2016 Men’s NCAA Division I Championships, Caeleb broke American and US Open records.

After NCAA Division, it was a time for the Olympics. No doubt, Caeleb Dresel made his way to the 2016 Rio De Janeiro Olympic games.

More than that, in Rio, American freestyle and butterfly swimmer won the gold medal in the first heat in the 4×100 meter freestyle relay.

Furthermore, following the Olympics, Caeleb ends up being sixth in the 100meter freestyle.

However, his second gold medal victory took place in the 4×100-meter medley relay, where he sets record in a freestyle split of 47.74.

At the beginning of 2017, Caeleb was participating in NCAA Championship.

Eventually, Caeleb broke the American US Open record with 43.58 and 40 in 100-yard freestyle and butterfly swimming competition.

Meanwhile, in the preceding year, he also appears in the World Championship.

Interestingly, in the 2017 world championship, Caeleb won three gold medals on a single day. Moreover, he is the only swimmer currently to achieve such a high record.

In 2019, Caeleb was a part of the inaugural International Swimming League, where he played from his team Cali Condors.

In addition to that, Dressel finished third place in the final match in Las Vegas, Nevada, in December.

Meanwhile, during the competition, Dressel earned the MVP in all 3 matches he competed. Moreover,  Dressel also broke Florent Manaudou‘s world record by swimming a 20.24 in Las Vegas.

After that, at the 100-meter butterfly Caeleb finished the heat (47.78 seconds) and 50-meter freestyle.

In addition, it was also the first and second time he beat his personal 100-yard individual medley mark.

At this year’s Olympic games, Caeleb Dressel is the USA Swimming captain. As stated above, the young swimmer will be returning home with five Olympic gold medals.

Nevertheless, an American swimmer Caeleb won his first gold medal from 4×100 m freestyle, where he finished the heat at 3:08.97.

Furthermore, he won another gold medal at 100-meter freestyle. 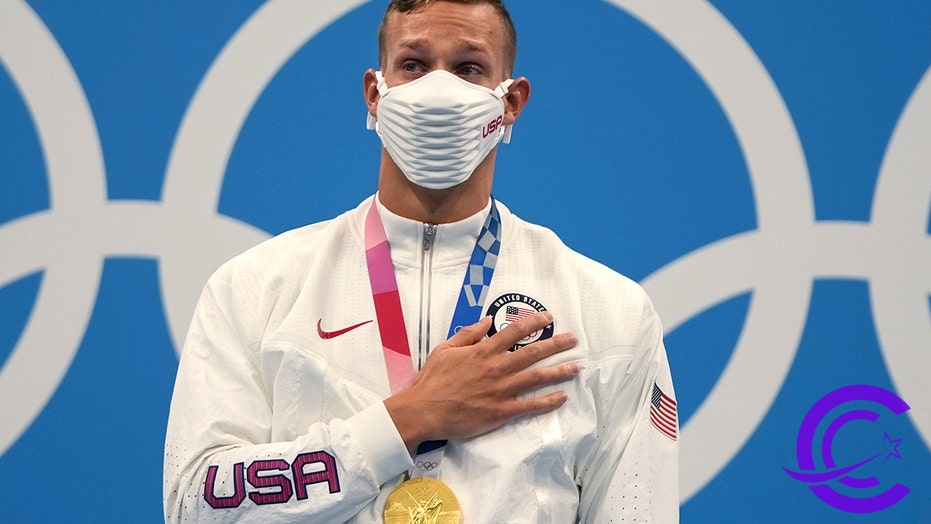 In fact, Caeleb also has helped his team to win a gold medal in the relay’s lead-leg off and splitting the second-fastest time among his teammates.

Moreover, Dressel has also tied the Olympic record in the 100-meter butterfly, with an exceptional timing of 50.39.

Likewise, it was followed by his second gold in the 4×100 medley relay and set a world record.

As of 2021, Dressel has posted films on his YouTube channel, which is concerned with his previous swims.

Moreover, he started his YouTube channel through his 100-meter butterfly world record swim.

In the video, he has studied and analyzed his own style of swimming. Moreover, Caeleb has also posted a critique video of his SwimSwam swims.

Nevertheless, before the Summer Olympics of 2020, he started doing some pop culture swimming videos.

Likewise, Dressel has posted his perspective to GQ on the swimming scenes like Cast Away and Kingsman, etc.

Has Caeleb Dressel been to the Olympics?

Yes, the five-time gold medalist has been to the Olympics twice, first in the 2016 Summer Olympics and the recent Tokyo Olympics.

Where is Caeleb Dressel from?

Caeleb Dressel is an American butterfly and freestyle swimmer. He is originally from Green Cove Springs, Florida, United States.