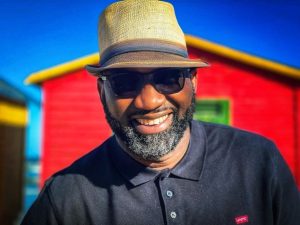 Chilu Lemba (born 27 August 1975) is a Zambian-born and South African–based radio and television presenter, voice over artist, author and musician. He is widely acknowledged in the communications industry as one of Africa’s top Voiceover Artists having narrated numerous productions for radio, television and stadium events such as the African Cup of Nations opening ceremony, broadcast to millions of viewers around the world. His voice is heard across the continent daily on ads ranging from branding commercials for washing detergents and cellphone networks, to promos for satellite television channels. In June 2019, he released his memoir titled Finding My Voice.

During his teenage years, Lemba developed a passion for writing music. A recipient of the Chengelo Secondary School Music Award in 1992, he has been involved in numerous musical projects since. Lemba is famed for writing and recording Afro Hip hop hits “Zambia Moto” and “Shibuka”, featuring Alan Mvula and Kora Award nominee – Joe Chibangu respectively as well as the song Njota featuring Hip hop artist Zubz and Zambian producer TK Siyandi. Lemba’s debut solo CD, Sound Legacy, which spurned a number of radio hits in his home country was released under Ten Twenty Seven Communications, a company he co-owns with his wife. Although Sound Legacy is Chilu’s debut album, he previously – as a member of The Man X Crew – released a cassette single titled “Keep Moving”. It was recorded at the Lemba family farm in Lusaka in 1994. Copies were printed and sold mostly to friends and relatives. In many interviews since, he credits his musical sound to encouragement he received from Beats International and particularly, Norman Cook (a.k.a. Fatboy Slim) during a Rap workshop that the group held on their African tour in the early nineties. They encouraged delegates to express African originality and be less American sounding. In 2011, Chilu began recording his second album. In a 3-page article feature on him that appeared in the August 2011 issue of the South African Airways inflight magazine Sawubona, Chilu stated that his second album was to be titled Flowers, Needles & Drumbeats. The album was released in June 2012. Promotional material included the video for the Njota Remix which was nominated for Best Foreign Video at the Born n Bred Music Awards 2014, losing out to Zone Fam’s Translate.

Chilu was until early in 2006 a freelance presenter on 94.7 Highveld Stereo. Recently, his voice has been heard on many television and radio spots across Africa on the Coca Cola Popstars television series, where he was the voice narrator for three seasons. His voice also featured on inserts in FIFA’s live broadcast of the 2010 Fifa World Cup round robbin draw seen across the world in 2008 as well as the narration for the animated introductory “Zakumi” video, chronicling the rise of Zakumi – the 2010 Fifa World Cup South Africa mascot. He has also been the voiceover artist whose voice is heard at a number of widely broadcast events including The Kora All Africa Music Awards and the Confederation of African Footballs’ 2013 Orange Africa Cup of Nations opening ceremony held in South Africa.

He was the co-anchor of the lifestyle magazine television show Africa Within, which he hosted alongside Claire Mawisa during seasons 5 and 6 and with Sandy Ngema in Season 4. It was broadcast on SABC Africa on the DSTV Satellite Bouquet. Currently, re-runs of the show are aired on SABC 2. In 2007 he presented a weekly television show called Sports Stake featuring various South African sporting personalities as guests.

The Lusaka Radio Summit is organised by Ten 27 Communications.

He is married to Caroline Madekurozwa Lemba. They have two daughters; Talitha Lutanda Lemba born in March 2006 and Liseli Lemba born in June 2008. He is a cousin of Zambian born author, Joseph Kalimbwe with whom he shares a grandfather.