You have undoubtedly heard about Marvel’s superhero Captain America but have you ever heard of the Captain America of the soccer world? If you guessed Christian Pulisic, then you are correct.

Christian Pulisic is an American professional soccer athlete who plays as an attacking midfielder and winger. He began his professional career with a German club called Borussia Dortmund.

Moreover, Pulisic was at the top of the headlines for various days as his transfer to Chelsea was worth $73 million, which made him one of the all-time most expensive players in North America.

Likewise, Christian is the youngest athlete ever to become a captain of a U.S. national team. He has earned several honors under his name throughout his career. 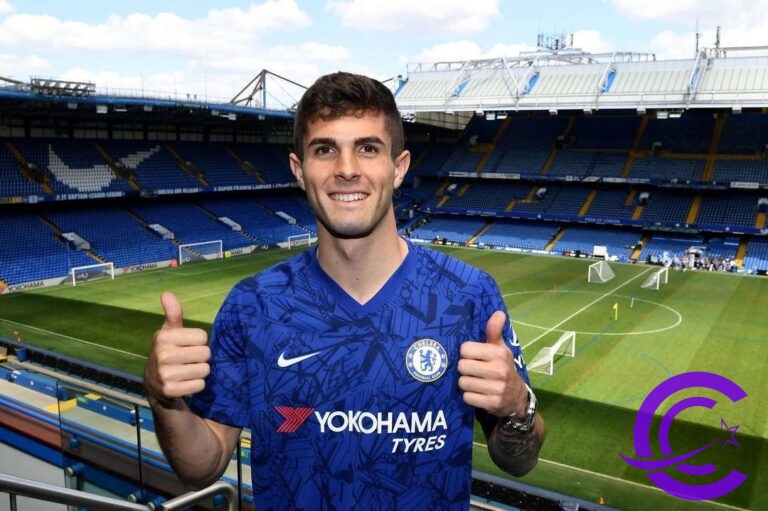 Furthermore, let’s get to know more about one of the rising soccer athletes, Christian Pulisic. Firstly here are some quick facts about the soccer world’s Captain America.

Chelsea’s famous winger and attacking midfielder, Christian Pulisic, was born on September 18th, 1998, in Hershey, Pennslyvania, to his proud parents Mark Pulisic and Kelley Pulisic. He also has a sister named Devyn Pulisic.

Pulisic grew up with parents who loved soccer. Both his parents played soccer at George Mason University.

His father, Mark, played professionally for an indoor soccer team called the Harrisburg Heat during the 1990s.

After his retirement as an athlete, Christian’s father started working as a coach for youth and professional levels.

Moreover, at the age of seven, Christian lived in England and played for the youth football club called Brackley Town.

Christian and his family moved back to Michigan after his father became the general manager of the indoor football club called the Detroit Ignition.

Similarly, his family moved again and resided in the Hershey area where he was born there. He represented PA Classics, a local U.S. Soccer Development Academy.

Similarly, Christian occasionally trained with a professional club called the Harrisburg City Islander, which is presently called the Penn FC.

How old is Christian Pulisic? Age, Height, and Body Measurements

Christian, who is also famously known as Captain America, turned 23 years old. He has light brown colored hair and eyes.

Moreover, Pulisic possesses an athletic physique and stands at the height of 5’8” (1.73 m), and weighs around 70 kgs.

Furthermore, according to Christian’s birthdate, his horoscope falls under the sun sign of Virgo. People with Virgo as their sun sign are known for their critical, hardworking, and reliable nature.

Christian started his professional club career with Dortmund at the age of 16 in February 2015. Initially, he was part of the U17 team, and later Dortmund transferred him to the U19 team.

Moreover, Christian made his debut for the first team on January 24th, 2016, in a friendly match against Union Berlin.

In the match, he recorded a goal and assisted for another goal while playing full 90 minutes. Likewise, Pulisic made his debut in the UEFA Europa League while playing against FC Porto on February 18th. 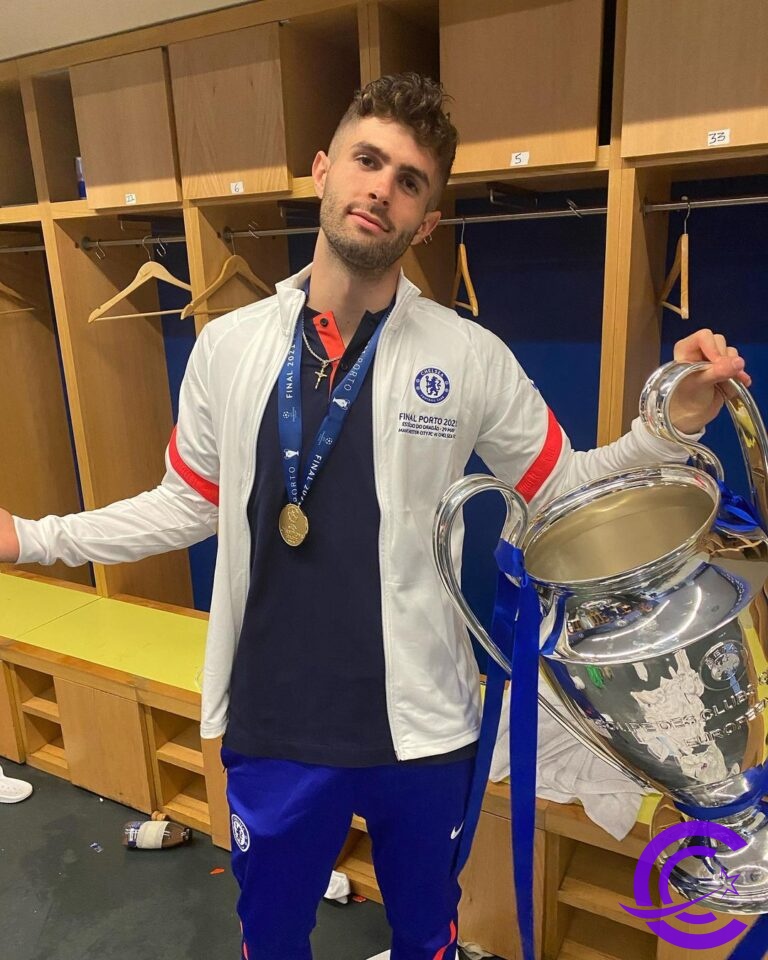 Similarly, he participated in his first Bundesliga on February 21st, 2016, where the club competed against Bayer Leverkusen.

After his second appearance in the Bundesliga, the team manager stated-

“Christian is just a teenager in his first year of professional football. His first two games as the starting eleven were with Leverkusen and here today in Schalke – which is not the easiest of tasks.

“It presents our huge appreciation…..see him as a full-time player on our team… He looked really good lately, which was proved today. It is completely normal to not have played with such pace and intensity for over 90 minutes.”

Furthermore, Christian recorded his career-first Bundesliga goal on April 17th, which made him the fourth-youngest player and youngest non-German player to score a goal at 17 years.

During the 2016 International Champions Cup, Christian became the youngest player of Dortmund to compete in the UEFA Champions League, his first competitive appearance.

According to the contract, Christian had to play for the club until 2020. Pulisic’s first goal in the UEFA Champions League made him the first youngest scorer of Dortmund to record the goal.

Furthermore, he recorded his first goal during the DFL- Supercup on August 5th, 2017.

Premier League’s club Chelsea signed Christian on January 2nd, 2019. However, due to his contract extension with Dortmund, he represented the club on loan for the remaining 2018-2019 season.

Moreover, Chelsea had to pay £58 million as a transfer fee for Christian’s transfer from Dortmund.

Christian made his Premier League debut on August 11th, 2019, representing Chelsea while playing against Manchester United.

He scored his first goals as a Chelsea player on October 26th, 2019, finishing with a perfect hat-trick win against Burnley.

Moreover, his perfect hat-trick record was the first of his career, and Christian became the second American to accomplish this in the Premier League.

He was also the youngest hat-trick scorer in the entire Chelsea’s history. Likewise, Christian also became the first Chelsea member to score a perfect hat trick since 2010.

On August 1st, 2010, Christian scored the opening goal during the 2020 FA Cup Final while playing against Arsenal and became the first American player to score in the competition finals.

However, Pulisic was substituted early during the second half due to a hamstring injury.

Furthermore, in August 2020, Christian became part of the eight-player shortlists for the Premier League Young Player of the Season honors, which was later awarded to Trent Alexander-Arnold of Liverpool.

After his injury got better, Christian made his season debut on October 3rd, 2020.

During which he made his first Premier League start on October 17th while playing against Southampton.

During the game, Christian’s 93rd-minute goal for Chelsea while playing against Leeds United on December 5th, 2020, made him the fastest American to lead towards ten Premier League goals.

Moreover, Christian has played with local and professional clubs throughout his career. He has also represented the United States team- U-15 and U-17.

He was captain for the U-17 team during the 2015 FIFA U-17 World Cup. Likewise, Christian was also eligible to play internationally, representing Croatia, but he declined the opportunity.

Thus, making Christian the youngest American player to play in the World Cup qualifier. He became part of the senior team for the Copa América Centenario.

While playing against Bolivia, Christian became the youngest player to score for the United States.

Also, becoming the youngest athlete to score a brace in American history.

Similarly, in the next match against Christian broke another youth record and became the youngest American player to start a World Cup qualifying match.

How Much Does Christian Pulisic Make? Net worth

Christian Pulisic, aka Captain America, has grown into one of the biggest soccer stars.

Pulisic’s journey started at a very young age, and since then, he has achieved various youngest player honors throughout his career.

He is one of the most expensive North American athletes in history to date. His exceptional ability has undoubtedly awarded him with various attractive deals.

Although we cannot state the exact amount of his career earnings, we can assume that-

“THE PRESUMABLE NET WORTH OF CHRISTIAN PULISIC FALLS SOMEWHERE AROUND $10 MILLION AND MORE.”

Does Christian Pulisic have a child? Personal Life and Girlfriend

With having an impressive professional career, Christian is also one of the most good-looking athletes out there.

Hence, the most frequently asked question about him is whether he is single or not? If he has a girlfriend or not? If yes, who is she?

Christian has never gotten his name linked with anyone yet, nor has he ever shared about a potential girlfriend on his social media.

Thus, we can assume that Christian Pulisic is most probably single and is not dating anyone.

According to Fox Sports, Christian Pulisic is undoubtedly one of the best players in Chelsea.

Christian Pulisic is called Captain America because he is considered one of the players who carried the nation into the new generation. Thus, earning his nickname “Captain America.

How old was Christian Pulisic when he went pro?

Christian Pulisic turned professional player at the early age of 17.

What is Christian Pulisic’s market value?

According to the TransferMarkt website, Christian Pulisic’s current market value is €50.00m.