If you do not be a part of the parade, you will have to stand there and watch the parade. And Clelin Ferrell is one of the players who chose to be in the parade.

For those who really have no idea about the guy, here’s a short introduction.

Clelin Ferrell is a professional football player for the Las Vegas Raiders of the NFL. He serves as a defensive end for the team.

Before hopping into NFL diaries, he remained a collegiate player for Clemson University.

Not to mention, he topped the charts by grabbing the Ted Henricks Award in 2018, which is delivered annually to college football’s top defensive end.

This is not it. He has quite an enormous collection of awards and recognition during his time at Clemson. We will get back to it again in the middle of the article and explore his early life, NFL career, family, girlfriend, and net worth but before that, let’s start with the basic must-know quick facts about the defensive end guy Clelin Ferrell.

Clelin Ferrell was born on May 17, 1997, to his parents, Cleavester Ferrel and Faye Ferrell, in Richmond, Virginia.  He is not alone in his family.

He has four brothers and four sisters, and they all are at least ten years older than him. According to Clelin, he was a little spoilt kid than the others as it was tough for his parents to looks after ten kids, and he was the youngest of all.

His father and mother both worked in the military. His father worked two tours of duty in Vietnam, and his mother worked in Operation Desert Storm. Faye also previously worked in Germany, Korea, and Japan.

They both had kids from their previous relationships. They met each other in 1994 and tied the knot in 1996, and Clelin was brought into the world a year later.

Clelin’s father passed away while battling lung cancer when he was just thirteen.

And then onwards, his mother looked after him and his siblings. They were a team indeed, and they looked around for each other when needed.

Moreover, until his father was alive, Cleavester used to really worry about his future and growth.

He wanted to make sure that his son becomes a great player one day. Thus, he used to talk to Benedictine Football Coach Greg Lilly regarding the discipline he has to bring in his life to make his career.

All his leadership, self-discipline, motivation, punctual, and coordination skills came from the teachings and guidance fed by his mother.

Because that is what she was taught in the area where she worked. Military rules really helped to shape him the way he is since his early days of life.

Waking up early in the morning, brushing his teeth, getting ready for school that too wearing a high-waisted pants, and buttoning up his collar shirts were all those acts that came naturally from his military genes.

He attended Benedictine College Preparatory, a private military high school in Richmond, Virginia, because his parents wanted him to understand the importance of discipline.

In his freshman year, he was when his father died due to cancer, as mentioned in the above section.

The whole junior team from Benedictine went to the funeral and showered their immense support. He was not in that state of mind to understand what death is?

Clelin was more like a liberated child. He wanted to do things on his own. Losing him was tough.

Although he had enough male role models in his life, including his older brothers, joining Benedictine boys school. You can watch Ferrell’s high school highlights:

It was after his father’s death that he got less rebellious, more disciplined, and respectful. That’s quite a track.

Exactly three months before getting committed to Clemson University and one week before the first game of his senior season, he injured his right knee.

It was a major one that made him undergo ACL surgery and miss an entire season for his senior year.

And guess what, despite his absence in the senior season, Clelin notched the fifth-best prospect’s rank in the state and the seventh-best weak-side defensive end.

Also,247 sports ranked him No. 101 prospects in the country.

Moving on to his college career, Clelin began the journey with Clemson. Well, those early days of his career were not that good. Luck was quite not in his favor.

He faced an injury, and it was on his hands this time. Poor Clelin, he got redshirted for the season of 2015.

But following that, Clelin was back in the game scoring 50 tackles, 12.5 for loss, and six sacks in 15 starts.

He successfully brought the team’s defensive rookie of the year award to him. Here are Ferrell’s college highlights,

Clelin reached the finals for the Ted Hendricks Award as the nation’s top defensive end.

He soon became the right hand for his coaches and later turned out to be the co-defensive player of the game again, titled by the coaches in the Sugar Bowl game.

Well, after the national championship, he moved back to his college for his junior year.

Following that, Clelin let go of his eligibility for the final year of college and moved ahead by declaring for the 2019 NFL draft.

No matter what, sooner or later, he had to jump into NFL as early as he could.

Ferrel had quite an interesting NLF draft profile in 2019. He received mixed views from experts.

Stephen White was of the opinion that Ferrell is great at the field and uses good techniques. He described Ferrell as someone who could fit in as a base 3-4 edge rusher or a base 4-3 defensive end.

Durst compacted Ferrell with Nick Bosa, regarding him a good technician.

Similarly, Thomas Wheaton called Ferrell a solid player both as a run stopper and a pass rusher. Charlie Campbell and Mike Esposito were also of similar opinions.

Likewise, Gavino Borquez praised Ferrell for using leverage, his flexibility, and his hand savvy to secure the edge. 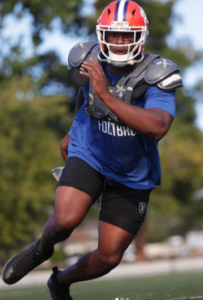 Ryan Wilson praised Ferrell for his dominant college career, pointing out that he has to get even stronger.

Charlie Campbell came up with Ferrell’s scouting report, pointing out his pros (strengths) and cons (weaknesses). The report is summarized below:

Ferrel is well-rounded with an effective pass-rusher. His nose guard for the quarterback is praise-worthy.

Similarly, he has good first-step and active hands. He also holds the potential for the repertoire of moves.

Further, he has excellent rip move and quality motor. Ferrell is visionary, good in pursuit, and athletic enough to redirect. He is indeed a solid run defender with amazing speed.

Campbell also pointed out a few cons which go this way: Ferrell is not overly fast. Likewise, he is not that strong.

There is a requirement for him to continue refining his pass-rushing moves.

And then, Ferrel paved his path to the NFL.

The Oakland Raiders hired him with the fourth overall selection in the first round in the 2019 NFL Draft. Well, if you want to check out his reaction to being drafted, Click here.

He got a chance to make his NFL debut against the  Denver Broncos on Monday Night Football in the very first week.

Clelin, along with his team, laid off Los Angeles Chargers. He took his game under his swing and kicked out players like Jo Flacco and Philip Rivers.

Hey Readers, hold on because there is one more interesting fact about him, and you cannot miss this. Clelin inked a tattoo on his arm as soon as he got drafted by the Raiders.

We do not know if the fascination is the correct word or not, but this act clearly shows his fascination with football.

You can see Clelin Ferrell’s career statistics on the website of football-reference.

Well, of course, he is not an army brat. Being born and raised in a military family, he knows under what circumstance a definite player can mold his career.

He understands the boundary and limitations of his life to figure out the importance of time and discipline.

But, before that, Clelin also went through a phase in his life where he always wanted to be a funky guy who wears those loose, jiggle hip-hop pants, unties his shoes, and wears a chain.

Never mind, his ideas and wants were not bad, but fate and upbringing did not allow that, and eventually, he came out of it.

Besides his career, we have a lot to talk about him. Clelin carries off a partly-shaved hairstyle with a macho-like charming personality.

It’s obvious to have curiosities if a younger player like him likes to stay in a relationship, has a girlfriend, or not.

Well, as of now, there is no precise evidence about his hook-ups with anyone. However, he recently posted a stunning picture with a female wearing jersey similar to his. The beautiful woman might be his girlfriend.

Ferrell has not revealed her name yet. 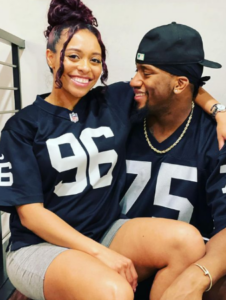 Clelin did not even lack here as a philanthropist. Either way, starting with a small amount or big, he is supportive enough to help the needy.

Recently, there was news on the internet that Clelin made a certain amount of donation, $50,000 to the  Eviction Diversion Program and the other $50,000 to t Richmond’s Family Crisis Fund.

The latter is a foundation that helps families to recover loss caused due to the pandemic. And the first one is administered through local nonprofit Housing Opportunities.

You can also check out one of his Instagram posts, where he wrote about contributing to the Las Palmas Community.

It’s no doubt that Clelin is soon on the verge of reaching the heights of success. The military genes did its business for sure.

However, Clelin did not have that standout rookie year, but he has a lot more potential o flash out.

He faced his own ups and downs in life but managed to overcome all of them, from his father’s death to the injuries that made him undergo surgeries.

Talking about his net worth and salary, he is well-equipped when it comes to handling his finances. There is no need to worry about it.

While we search through the internet about his net worth, google answered him as one of the highest-paid NFL players. Sounds great.

And aligning with spotrac.com, Clelin has inked a four-year contract with the Oakland Raiders, which pays him an annual base salary of $1,920,492 with a signing bonus of $5,206,966.

As claimed by online sources, Clelin Ferrell has an accumulated net worth of around $21.3 million as of [current year].

There is nothing to worry about when it comes to Clelin Ferrel’s social media presence. He is fairly active on his Instagram and Twitter Handles.

Not to mention, his Instagram posts are an absolute delight to watch and read, colorful and vibrant. Also, fully loaded with his personal and professional talks.

Want to get more ideas of him? How is he like in personal and professional life? Hop on to the following links and give him a major following.

How many sacks does clelin ferrell have in 2019?

Why did the Raiders draft Clelin Ferrell?

Ferrell is undoubtedly a good player. The Raiders drafted him in 2019 as he portrayed the characteristics the Raiders were looking for.

Ferrell was the cornerstone of the defense in his college.

The team was looking for a player who could perfectly fit in their defensive scheme and also comply with the locker-room tradition the Raiders wanted to create.