Desmond Howard is a former American National Football League player. Currently, he serves as a college football analyst for ESPN.

During his playing career, he was mostly known as a kick returner. Besides, he played in a wide receiver position too.

He played college football for Michigan Wolverines and won the Heisman Trophy with them.

In addition, he is the Most Valuable Player of Super Bowl XXXI and is also ranked as the ninth greatest kick returner in NFL history. 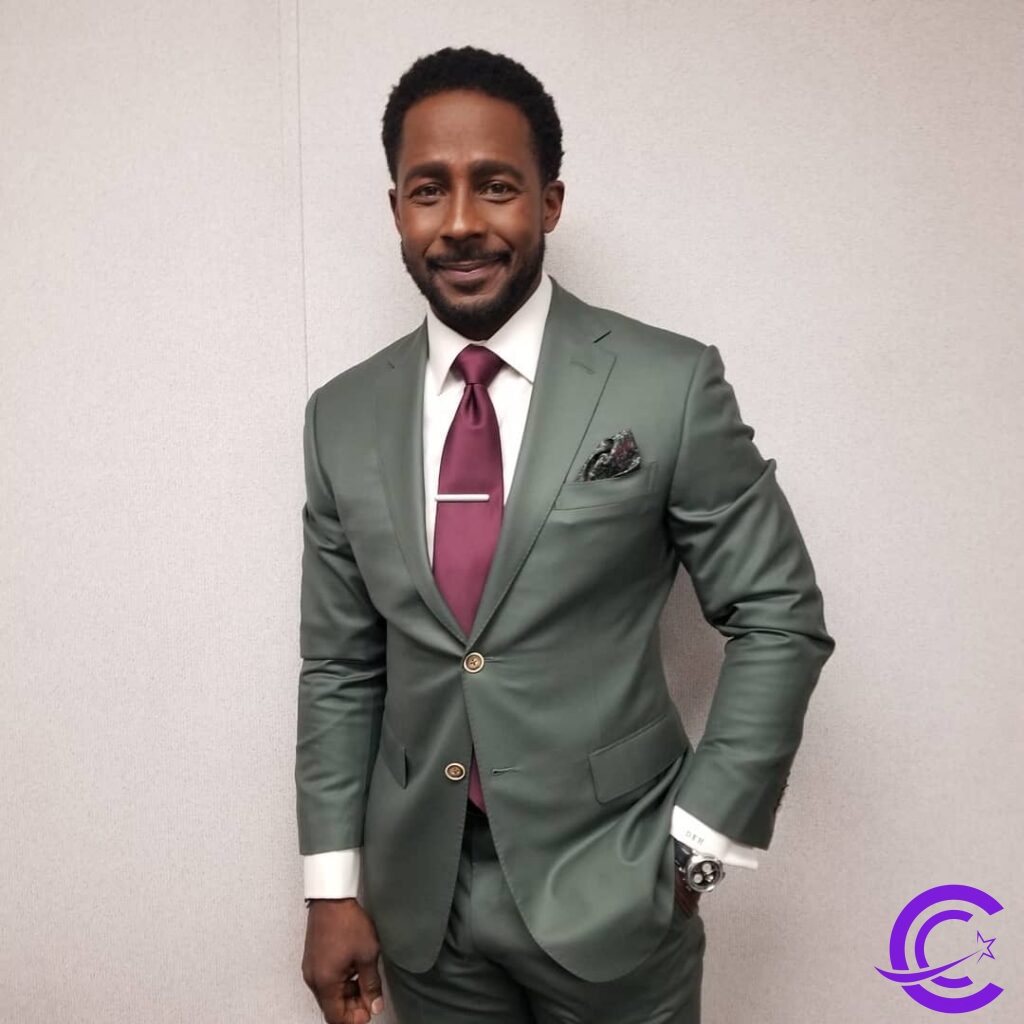 Moreover, Desmond is also a College Football Hall of Fame inductee. He had a successful career both as a player and broadcaster.

You may be well familiar with his face and voice during pre-game shows and commentaries on ESPN.

But most of his fans are not aware of his career as a footballer. Thus, we have packed a summary of his NFL career and personal life. Let’s begin then.

Howard was born on May 15, 1970, in Cleveland, Ohio, to parents JD Howard (father) and Hattie Howard (mother).

His father, JD, was a formal semi-pro basketball player who has toured with Jolly Jokers. Later, he used to work as a tool and die plant in a local factory.

Likewise, Desmond’s mother, Hattie, used to work as an administrator in a school. Furthermore, the couple had two sons. Another one was Desmond’s brother, Jermaine.

Desmond went to St. Joseph High School in Cleveland. In his school days, he played for the school’s basketball and football teams.

Explicitly, Desmond played as a tailback in his senior season at the school. For his excellence in football, he received All-American and All-Ohio honors.

During his school career, Desmond recorded 18 touchdowns, 5,392 rushing yards, and ten defensive interceptions. In addition, he bagged varsity letters in all the sports he played, track, football, and basketball.

Desmond attended the University of Michigan. He was a star for the Michigan Wolverines football team and set twelve records at the team.

During the 1991 season, he bagged the Heisman Trophy, Maxwell Award, and Walter Camp Award.

Desmond made it to the All-America first-team. In addition, the inaugural Michigan Football Legend was inducted into the College Football Hall of Fame in 2011.

Desmond’s college career began with less playing time. The Michigan counselor helped him a lot in boosting his confidence.

Howard was a leading scorer with 138 points in the Big Ten Conference in 1991. For his brilliance, fans voted him as The Mount Rushmore of Michigan Football for the Big Ten Network in 2014.

Desmond had impressive stats in the 1991 season. This put him as a favored contender for the Heisman Trophy, which he eventually won the same year.

His “The Heisman pose” celebration of imitating the football player on the Heisman trophy is famous in the year. He did the celebration after scoring in a game against Ohio State.

The then Super Bowl XXVII champions Washington Redskins poached Howard in the 1992 NFL Draft. He was skilled primarily as a kickoff returner rather than a receiver.

“The return specialist” name came to him as he recorded 92 receptions in his first four seasons with the Redskins.

In the 1995 NFL expansion draft, the Jacksonville Jaguars picked him. Howard played one season with them. During that, he had 26 receptions, one touchdown, and ten kick returns.

In 1996, the Packers reached the Super Bowl XXXI defeating the San Francisco 49ers. They won the match 35-21 against the New England Patriots.

Howards made a 99-yard kickoff return resulting in a Packers touchdown in the Super Bowl. 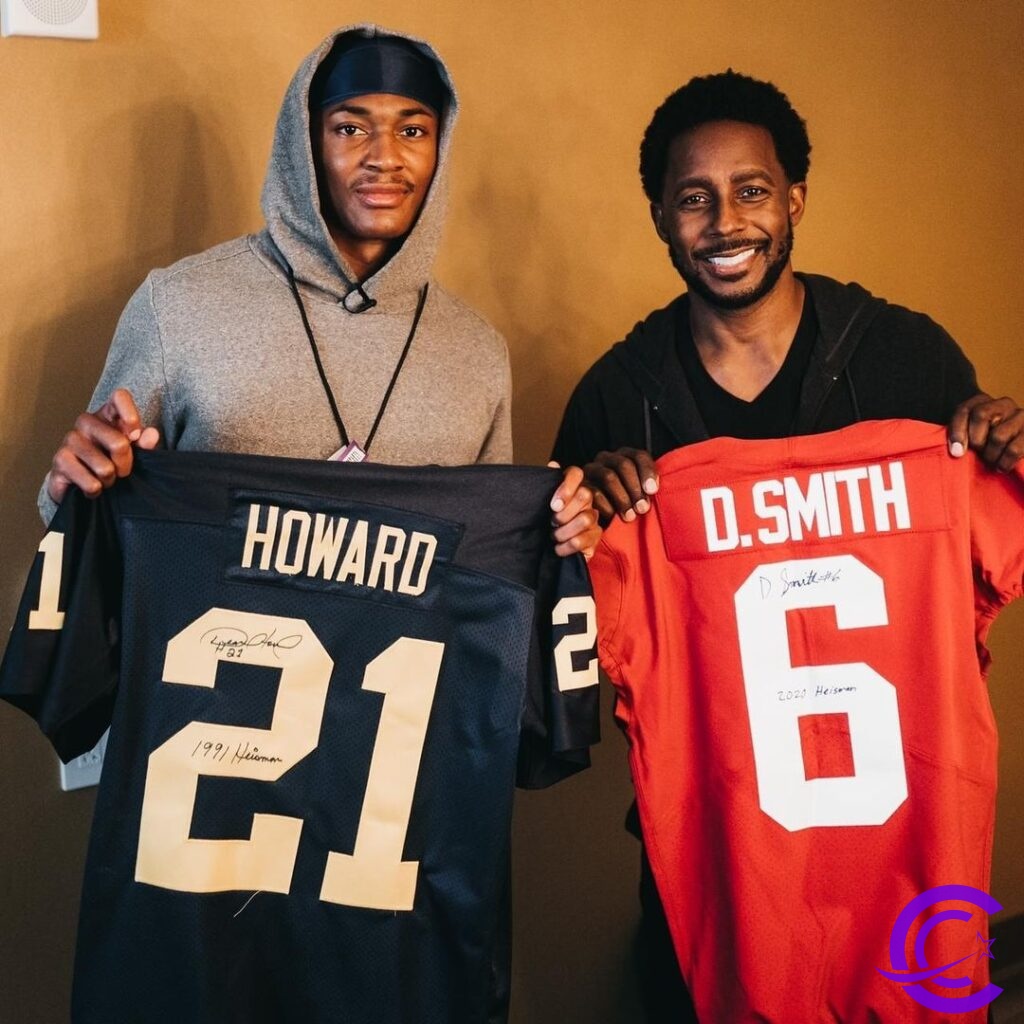 He achieved the Super Bowl Most Valuable Player award. Notably, he is the only special teams player in NFL history to win the prize.

The Oakland Raiders signed him as a free agent in 1998. He had 61 kickoff returns there before rejoining the Packers in 1999.

However, he suffered injuries and poor performances. Thus, the Packers were released in the middle of the 1999 season.

Later, the Lions signed him. He debuted for them with a special teams touchdown. Also, Desmond played as the kick returner at Pro Bowl in 2001.

That was his first and only appearance in the competition. After completing the 2002 season, Howard retired from football.

It has been almost two decades since Desmond last played football. After leaving the profession as an NFL player, Howard rested for a while.

Then he joined ESPN, where he currently works. Since 2005, he has been traveling along with Chris Fowler, Lee Corso, and Kirk Herbstreit to the match sites. There they cover the pre-game show ESPN College Gameday.

Howard mostly appears as an in-game studio figure. You can hear his voice in commentaries when you tune to the Detroit Lions Television Network during Detroit Lions’ pre-season games.

Moreover, he has also called games for the NFL on Fox Sports. Desmond served there for one season, sharing the studio with former ESPN colleague Carter Blackburn.

Currently, Desmond is at ESPN, where he is an analyst for college football.

He has got prominent roles in College GameDay & College Football Live. He evaluates the NCAA games and other college-level games with his expertise.

Howard has been featured in EA Sport’s NCAA Football video game series. He was the cover athlete for the series’ latest installment in NCAA Football 06.

The college footballers who went to the NFL the previous year used to be featured on the cover.

The renowned Desmond’s celebration “The Heisman pose” was the illustration for the game’s new feature, “Race for the Heisman.” The picture is an icon for all those who are interested in college football games.

Howard was a brilliant player in his college career. The 1991 Heisman Trophy winner has bagged honorable awards like Maxwell Award, Walter Camp Award, and Chicago Tribune Silver Football award in the 1991 season.

The Super Bowl XXXI Most Valuable Player had received Big Ten’s Athlete of the Year 1991 award.

Moreover, the College Football Hall of Fame inductee has had his jersey no. 21 retired by the Michigan University’s football team.

Besides, Howard had also been inducted into the National Football College Football Hall of Fame in 2010 and the University of Michigan Hall of Honor in 2008.

Who is Desmond Howard’s wife? Wedding and Children

Howard married his longtime girlfriend, Rebekah. She is an authorized attorney. Besides, she also serves as an executive in event management and marketing.

Reports suggest the couple got married in a private ceremony. The couple resides happily in their house in Miami, Florida.

Notably, the couple has had three children, two sons, and a daughter until now. Desmond Jr and Dhamir are their sons, and Sydney is their daughter.

Desmond spends adequate time with his wife and children. No controversies or tensions have been reported about the Howard family until today.

Desmond seems to have a happy married life as no extra affairs have been rumored involving him or his wife.

Desmond Howard | Net Worth and Salary

Equally, he has a relatively successful career in broadcasting and currently serves at ESPN.

Henceforth, it can be speculated that the man has accumulated a significant sum of fortune throughout his life.

Some sources report that Howard has earned a total of $190 million in his football career.

Well, the figure cannot be suspected regarding his success during those days. Desmond earns $3 million as a salary.

How old is Desmond Howard? Age, Height, and Body Measurements

Similarly, he weighs around 85 kilograms (187 lbs). Howard was born in Cleveland, United States.

He schooled and spent all of his career in the US. Consequently, he holds an American passport.

Howard uses Twitter, Facebook, and Instagram as his social media handles. He is pretty much active on these platforms and frequently reaches out to his fans and admirers.

One can have a glimpse of the latest college and professional football news through his social media posts.

Who made the Heisman pose famous?

Desman Howard imitated the posture of the man in the Heisman Trophy during his celebration after scoring against Ohio State University in 1991. The photo went viral.

It was a subject of discussion in almost every sports media for weeks. Besides, some critics compared the act to Muhammad Ali’s way of teasing opponents.

Where does Desmond Howard live now?

Desmond Howard resides with his wife and children in his house in Miami, Florida. He works at ESPN as a college football analyst.

Is Desmond Howard a vegetarian?

In an interview, Desmond has stated that he takes egg whites as his post-workout meal but does not eat any meat. Thus, whether you call him, a vegetarian or not depends upon you.

How much is a Desmond Howard rookie card worth?

Yes, Desmond Howard is available for autograph signing both publicly and privately. Howard has signed at numerous shows, including the National Convention.

What did Desmond Howard say about Devonta Smith?

Desmond Howard says that Devonta Smith is the best wide receiver of the 2021 NFL draft.