All the Basketball enthusiasts know what a spectacular personality Dwight Howard is.

The eight-time NBA All-Star has been playing in the professional league since 2004s and has set numerous records with teams like Orlando Magic, Houston Rockets, Atlanta Hawks, Charlotte Hornets, Washington Wizards, and currently in Los Angeles Lakers.

Known for his amazing playstyle, Dwight is considered one of the best defensive players and greatest rebounders in the sport’s history. 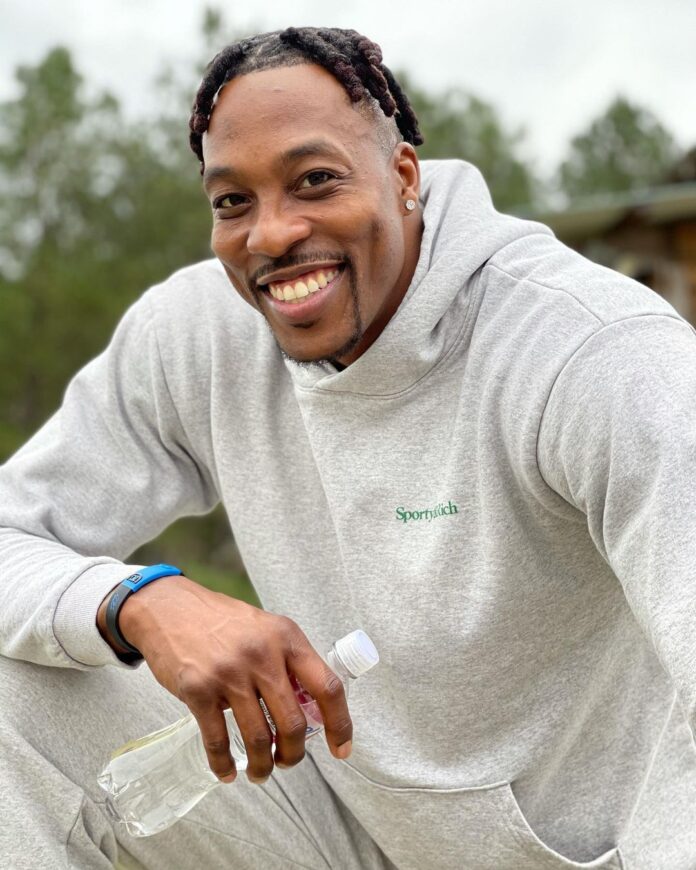 Playing in the center position, he is currently NBA’s leading player in rebounds, offensive and total, and blocked shots.

This former 2008 Olympic Gold Medalist and a potential Hall of Fame personality have an immense fan following that always wants to know more about him, so today, we will be taking you through his life – professional and personal records, his net worth, and more.

Born into a family of Athletic roots in basketball, Dwight Howard has the influence and passion for basketball right since his childhood.

His father – Dwight Sr., was an Athletic Director at one of the top national high school basketball programs and facilities in the country known as Southwest Atlanta Christian Academy.

Likewise, his mother – Sheryl Howard, was a Basketball player and had experience playing on the first women’s basketball team at Morris Brown College.

She faced seven miscarriages before giving birth to Dwight Howard. Dwight with his mother and grandmother

Quickly gaining name with his gameplay, he got awarded the Best National High School Basketball Award.

Leading his high school to a record score of 31-2, Howard averaged 16.6 points and 13.4 rebounds in his school years, playing as power-forward and led his team to win the state championship.

Dwight has been a devout Christian from his youth and even said that he wanted to use his NBA career and Christian faith to “raise the name of God within the league and throughout the world.”

As soon as his high school ended, Dwight skipped college and directly enlisted himself for the NBA Draft of 2004, where Orlando Magic’s first overall pick selected him.

Considering his high school records and feats, he was put ahead of the team in the season and proved his worth by accomplishing new records like becoming the youngest player in the NBA to record 20 rebounds in a game.

He also earned the All-Rookie Team Honours in the NBA Rookie Challenge of 2005. Dwight then trained to be a force to be reckoned with in the defensive area where he played center.

While the Magic always seemed not to make it, Howard and the team seemed to improve with every match they entered.

In the 2006-07 season, he got his first All-Star Team Selection and was also named the All-NBA Third Team.

Leading his team to the Finals in the 2008-09 season, Dwight became the youngest player in the NBA to win the NBA Defensive Player of the Year Award. 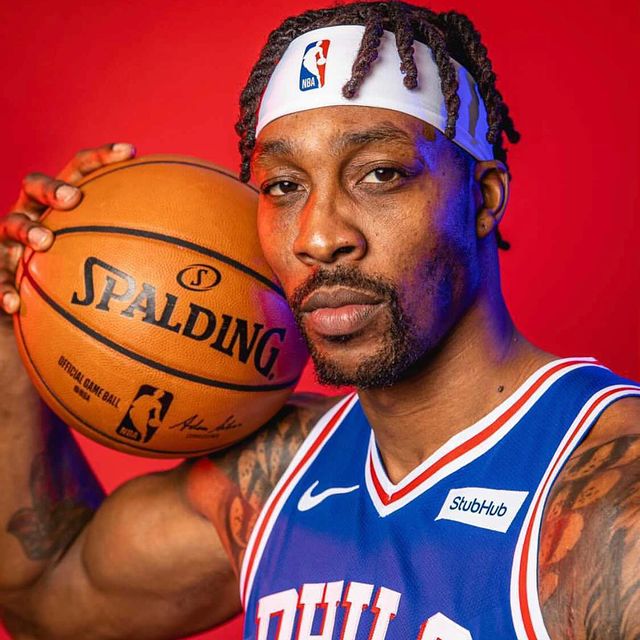 Dwight with his basketball

Later on, the next season, he was on top of the list of NBA for Rebounds and Blocks for the second consecutive time.

Afterward, in the 2010-11 season, Howard achieved the feat of being the first to be named NBA Best Defensive Player of the Year three times in a row.

However, despite Orlando Magic now winning, he pleaded to be traded from the team.

His 2012 season was one of his first setbacks that were majorly a result of his multiple struggles with injuries.

Even though the season was disappointing, he still managed to top the NBA in Rebounds and thus received yet another All NBA-Third Team Honour.

In the three seasons with Houston Rockets, Dwight faced a bumpy road as he accomplished a few more feats, namely the All NBA-Second Team and reaching 15,000 career points in December of 2015.

While only making it to the finals once with the Rockets, Dwight also faced a severe knee injury that put him out for 4 months in the 2014-15 season from December 14 to March 15.

Turning down a contract with the Houston Rockets after his third season with them, Howard again became a free agent.

In like manner, signing a three-year contract with the Hawks, Dwight had a great season with the team and had the most rebounds by any team member in their debut match with the Atlanta Hawk.

Despite a decent season, the athlete was traded to Charlotte Hornets in the following season.

Starting to make new records the moment he stepped in on June 2017, Dwight became the eight-player in the league to record a 30-30 point game in March 2018.

He also became a part of an elite group of 6 players to score a double-double in their first 13 seasons playing in the NBA. In July 2018, he got traded again.

While the new season bought him opportunities, it also bought him many injuries to deal with. Also, in April 2019, he went on to play a second season with the Wizards before getting traded again in July 2019.

In 2019, Dwight was returned to one of his former teams with whom he is playing since.

Due to his history of injuries in the previous season, Howard agreed to sign a non-guaranteed contract, which gave the Atlanta Hawks the authority to let go of the player any time they want.

Dwight Howard is a treat to watch on the basketball court. You can watch his career statistics on the website of basketball-reference.

Dwight Howard | Net Worth and Salary

Moreover, with a net worth of $140 million, this sportsman has garnered serious names with his plays, which can be seen with his salary growth over the years.

Starting with around $4 million in 2004 with the Orlando Magic, Dwight Howard has risen to earn almost $23 million in 2015.

As of 2022, this basketball player earns over $30 million per average when you consider his salary and all the other endorsements he is a part of due to his popularity. He also has an endorsement deal with Peak Sport. Along with this, he was also spotted with his stunning Ferrari FF premiered in 2011 and was also rumored to have bought a lavish in Los Angeles that cost almost around $20 million, which was his yearly salary back in the day.

While always being a part of multi-year contracts throughout his career with Orlando Magic, Houston Rocket, and others, in 2019, Howard got into a unique contract with the Lakers.

For this contract,  he was paid almost $14.5 thousand for every day he was a part of their roster and was also stated that the Lakers would only be viable for $6,000 if he got injured before the season.

Therefore, the mitigating the risk of injury pay by the Los Angeles Lakers.

Everyone famously knows that Dwight Howard has five different kids with five different women. With this, he also has his fair share of abuse and defamation allegations that put his personality in turmoil.

In 2010, he put forward a defamation allegation against one of his children’s mothers – Royce Reed, who had publicly disclosed and talked about their relationship on multiple shows.

Due to a contractual bind, Reed had to pay a $500 fine as she mentioned Howard’s name publicly on separate occasions.

A few years later, he received child abuse accusations when an investigation in 2014 determined that Howard beat his son with a belt. In his defense, the player said that his parents disciplined him when he was a kid. 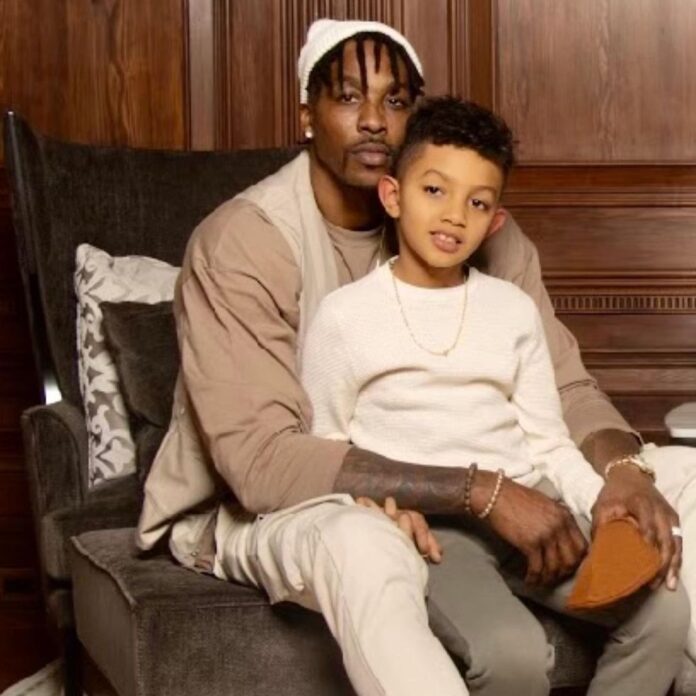 Howard with his son Davido

Howard is actively into philanthropy, giving back to society. He established the Dwight D. Howard Foundation in 2004.

The NBA player also organizes summer basketball camps for boys and girls, collaborating with high school and college coaches and players. Moreover, he invites his fellow NBA players to be on hand at the camps.

He rightfully contributes for the people he shares the basketball-love with.

On Instagram, he has around 2.9 million followers, where he mostly posts match highlights, pictures of his team, and many more.

He is not so active on Facebook. If you search his account,  you will find some of his favorite NBA moments and basketball-related videos there.

On Twitter, he has more followers than on Instagram. Howard has a total of 6.5 million followers, and he tweets quite often.

Recently, on his last tweet, he retweeted Shams Charania’s tweet, who is an NBA writer, and analyst.

Why was Dwight Howard admitted to the hospital?

Howard was returning from a promotional trip in China for his shoe sponsor, Peak, when he got ill.

What is Dwight Howard’s D joke with the interviewing reporter?

Howard said to the FOX Sports reporter, “Our D was good tonight, so we got to make sure our D stays good.”

He further added, “it’s very important, but it starts with the D. We got to make sure we keep playing good defense.”

D stands from defense but Howard and his teammate Dennis Schroder’s reaction clearly showed that this was not the case here. It was in the postgame interview following the 119-114 victory of the Atlanta Hawks over the Chicago Bulls

Nonetheless, Howard at the end of the interview used the word “defense” as an attempt to clear the mess.

How much Dwight Howard’s contract with the Los Angeles Lakers worth?

Dwight Howard’s signed a one-year contract worth $2.56 million with the Los Angeles Lakers in August 2019.

What is Dwight Howard’s message issue?

Dwight Howard accidentally displayed his messages on the screen. He pressed the wrong button, leaking his messages via live.

The conversation seemed to be between Howard and his fiancee Te’a Cooper of the Los Angeles Sparks. Howard seemed to be explaining something to Cooper.

How good was prime Dwight Howard?

Howard has been considered one of the top 5 players in the NBA. He had a mesmerizing career, playing some really intense defense.

He has a positive influence on the audience. However, he is not considered as dominant as the top 10 centers in NBA history.