Svitolina started her professional career when she was just 16 years old. However, she was a fan of tennis since she was a child. The Ukrainian player started proper training when she was 13 years old and turned pro three years later. Elina Svitolina At The Australian Open

Besides that, the former World No.3 is the first Ukrainian player to rank in the Top-10 WTA ranking. As of now, she holds the No.5 ranking. Media and critics praise her dedication to the sport generously. The young athlete is very focused and hardworking in general.

Elina is also famous for dating french professional tennis player and 2005 Newcomer of the Year Gaël Monfils. The pair have been dating for a while and look very much in love. They show up at each other’s games to support and cheer on one another.

Before getting into details about the upcoming star tennis player, here are some quick facts about her.

Elina Svitolina was born in Odessa, Ukraine, to Mikhaylo Svitolina and Olena Svitolina. Both her parents were athletes, so she was encouraged to be active in sports along with academics.

Mikhaylo was a professional wrestler, and his wife, Olena, was an experienced rower. The duo was very supportive of their daughter’s choices.

However, during the initial stages of her professional career, the pair’s involvement in her career was a bit overwhelming for the Ukrainian player. Hence, as any supportive parents, they gave her space and let her go, for which she is very grateful.

Also, Elina has an older brother named Yulian Svitolina, who used to play tennis as a child. She was most inspired to be a tennis player by the attention her brother was receiving from it.

Yulian, himself, is a tennis coach and still serves as an inspiration to his little sister.

Because of her tennis dedication, she was discovered by businessman Yuriy Sapronov who sponsored her when she was 13 years old.

The businessman was very impressed by her skills and wanted to invest in her. As a result, the Svitolina family moved to Kharkiv, Ukraine, to train properly.

After high-school graduation, like many tennis players, she did not attend college. The now 26-year-old has decided to focus solely on tennis and winning a Grand Slam title.

Although Elina has played since she was five years old, she seriously focused on her career when she was 13 years old. When Svitolina was just 14, she won the Junior Frech Open event.

Not to mention, she reached her first singles final as a professional player at the $25,000 tournament. The Ukrainian player was also a semifinalist at the 2012 Wimbledon Championship.

However, she lost to a Canadian tennis player. Nevertheless, shortly after, she qualified for the US Open. Besides that, as a junior player, she has won WTA 125K Royal Indian Open after defeating several fantastic players, including a top-10 player.

The London resident won her first WTA title at the 2013 Baku Cup and further became the first teenager to do so since 2012.

Following her win, WTA ranked her as a No.49 player. Moreover, in the 2014 Australian Open, she defeated a two-time Grand Slam champion before losing in the third round.

In like manner, she won the Baku Cup again along with winning the Western and Southern Open.

Also, she reached the quarterfinal at the Premier-5 level for the first time in 2014. Likewise, she was also the Premier-5 semifinalist in Wuhan’s first edition of the WTA tournament. 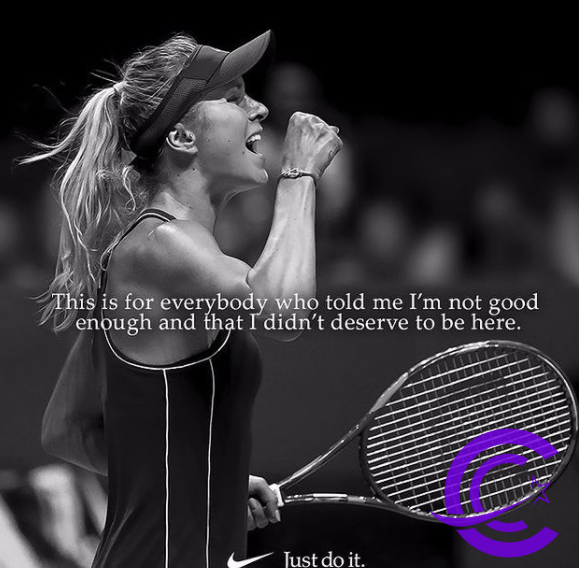 the haters in one of her Instagram’s posts

In the 2015 Australian Open, the Ukrainian player started well but eventually lost to Russian player Maria Sharapova. Nonetheless, she defeated the very well-known world No.1 American player and one of her idols Serena Williams.

Later, she defeated many players in the Indian Wells to upgrade her ranking to a No.21 player.

After that, a successful play at the French Open landed her at No.17 in the tournament. Eli played against 2019 world No.1 Japanese player Naomi Osaka in the 2016 Australian Open but lost.

Besides WTA, she also represented her country, Ukraine, at the 2016 Olympics. Svitolina played with Ukrainian player Alexandr Oleksandrovych Dolgopolov.

Following a poor loss in the 2016 French Open to Serena Williams, she beat her at the Rio Olympics to become the quarterfinalist.

After an average career in the 2016 WTA tournament, she brought her A-game back and won three Premier-5 titles in 2017. Elina started very strong in the Australian Open and Taiwan Open.

Later on, she won the Dubai Tennis Championships against Caroline Wozniacki and earned her first Premier-5 level title.

The 26-year-old won the 2017 Italian Open, followed by the win at the Canadian Open in Toronto. Furthermore, WTA ranked her world No.1 on September 11 of 2017.

Not to mention, in the 2018 WTA Finals, Svitolina won against 2019 world No.4 Dutch tennis layer Kiki Bertens and claimed the biggest title of her career. Furthermore, in 2019, she reached the Indian Wells semifinals.

However, she before lost the highest-ranked WTA Canadian and former world No.4 player Bianca Andreescu.

The Ukrainian player is dating a fellow tennis player of the Association of Tennis Professionals (ATP) named Gaël Sébastien Monfils. In the year 2020, the ATP has ranked No.9 worldwide and had his career-high rank No.6 in 2016.

Furthermore, along with being the 2005 ATP Newcomer of the Year, he is also a ten-time ATP World Tour singles titles holder. Besides that, he has reached the Grand Slam singles semifinals twice and ATP Tour Masters 1000 singles finals thrice in his tennis career.

He turned pro at 18 years old and since 2005 has set foot on at least one ATP World Tour singles final and won against a Top 10 player. Even though Monfils does not have any Grand Slam titles under his nose, he is considered one of the best in the tennis world.

Despite knowing each other for a while, the duo sparked their relationship in late 2018 after Eli’s tournament win.

They connected through Instagram after he commented on her photo and have been inseparable ever since. The adorable duo confirmed their dating at the 2019 Australian Open.

However, there were rumors of their breakup swirling around in June of 2019. The pair reportedly deactivated their social media account and unfollowed each other. Nevertheless, they are still together as of now and very much in love.

Yes, you read it right. People who love this tennis player and wanted to see them united soon, the wait is over now.

The pair announced their engagement on social media around the 1st week of April 2021 just a month after they decided to break up. Gael officially took it to Twitter and posted a heartening photo of Svitolina’s left hand with a diamond on her ring finger.

Gael just stood there in the background against a snowy mountain scenery. He tweeted the post with a heart emoji where he wrote, “ She said Yes.”

Elina also shared two lovely pictures on Twitter. In the first picture, she and Monfils were posing for a selfie she holds up her hand to show off her engagement ring.

The second photo was a closer look at the engagement ring which was shining in the sunlight as once again Elina showed up her hand against the snowy mountains. She wrote, “YES !!! to the beginning of our forever,”

However, there is no update regarding their marriage or kids. For the time being, both of them must be enjoying their engaged relationship status and must be willing to focus on their career and leave things as it is.

Moreover, Elina credits Monfils for all her tennis performance according to WTA tennis and says Monfil’s presence has a positive impact on my life.

She added, “I just always love the way that he pushes me to be better, moreover, I also try to motivate him to be a better person, a better tennis player. I think this is the way that it has to be, and you have to really support each other and push for better results.”

Elina Svitolian and her Tattoos

Well, the Ukrainian tennis player has a different craving for tattoos as well. She loves tattooing especially when it carries or symbolizes a significant meaning. Let’s talk about her tattoos.

Elina has inked a word tattoo that says, “‘Carpe Diem” on the corner of her right hand. The word, “Carpe Diem” means living in the present.

The tattoo is common among many as the word emphasizes living and enjoying in the present without thinking of the future result.

On the inner side of Elina’s right wrist, there is a tattoo that says, Om which is a sacred spiritual symbol mainly in Hinduism.

There is an ink of a tiger tattooed on the side of Elina’s left upper thigh. It signifies your strength, courage, and confidence. She got this tattoo done in 2017.

Recently in May 2021, a video caught too much attention where Gael Monfils got hurt while practicing tennis on the court over the weekend.

The tennis legend Roger Federer was called upon to show off his legendary accuracy in a target practice drill with Monfils.

The goal was not to hit Gael and the result turned out to be exactly the opposite where Gael got hurt.

“I know it’s a big challenge for you, but try to relax your arm and you can do it,” Svitolina suggested Federer.

Elina Svitolina | Net Worth And Salary

The 15-time WTA titleholder has an impressive net worth.

The WTA player is also sponsored and endorsed by well-known brands like Nike and Wilson Sporting Goods Company. Previously, Ellesse and Lacoste supported her clothing apparel and sporting goods.

She is also the owner of a raw, vegan, sugar-free, and gluten-free nutrition bar named SVITFIT.  Currently, the athlete owns a beautiful place in London and resides there. Apart from that, she also lives in Kharkiv, Ukraine.

Likewise, Monfils, her boyfriend, has a net worth of $10 million. He has earned over $19 million in prize money. The ATP player was formerly sponsored by Head, Nike, Prince, K-Swiss. As of now, Japanese multinational corporation ASICS supports his apparel, and Wilson sponsors his racquets

The WTA No.5 player is very active on social media. She is on Instagram with 692 thousand followers and almost a thousand posts. However, she only follows four people, including her boyfriend and their couple’s account.

The 26-year-old typically shares photos of her training, matches, highlights, and wins. Besides that, she posts about her family, friends, boyfriend, nutrition bars, trips, and few selfies.

Svitolina is on Twitter since 2011, with over 114 thousand followers. She follows just over a hundred people and mostly tweets and retweets about tennis and her matches. She is relatively more active on Twitter as she shares much about her career.

Not to mention, she is also on Facebook, with over 350 thousand followers and over 320 thousand likes. In like manner, she posts her selfies, tennis practice, and matches in her account. To sum up, the tennis player is well acquainted with social media.

Are Svitolina and Monfils still together?

Yes, the duo is still together. However, there were rumors in 2019 of their breakup as the couple reportedly deleted their couple’s account and unfollowed each other on Instagram. Regardless, they are together as of [current year] and are sparking marriage rumors.

Like any modern love story, they connected through Instagram after he commented on her post. They met up and started chatting and soon after revealed their relationship in the 2019 Australian Open.

What languages does Svitolina speak?

The resilient athlete speaks her mother tongue, the Ukrainian language fluently, along with English.

How much is Svitolina worth?

Furthermore, brands like Nike and Wilson Sporting Goods Company endorse the WTA player. Besides that, Svitolina owns a beautiful place in London and Kharkiv, Ukraine.

How old is Gaël Monfils?