Kenya is home to many popular marathoners, world-renowned for their athletic skills. Likewise, one of the famous Kenyan marathoners is Eliud Kipchoge, who has $3 million.

The long-distance runner was born on 5th November 1984, under the zodiac sign Scorpio in Kapsisiywa, Nadhi Country, Kenya.

In the same way as others, he was also raised by his mother and his three other siblings. Sadly, Kipchoge was never able to see his father in person.

Despite being born in a low-income family with his mother as a nursery teacher in Kenya, he still went to school.

Since the school was miles away, Eliud had to run about two miles regularly to get an education. 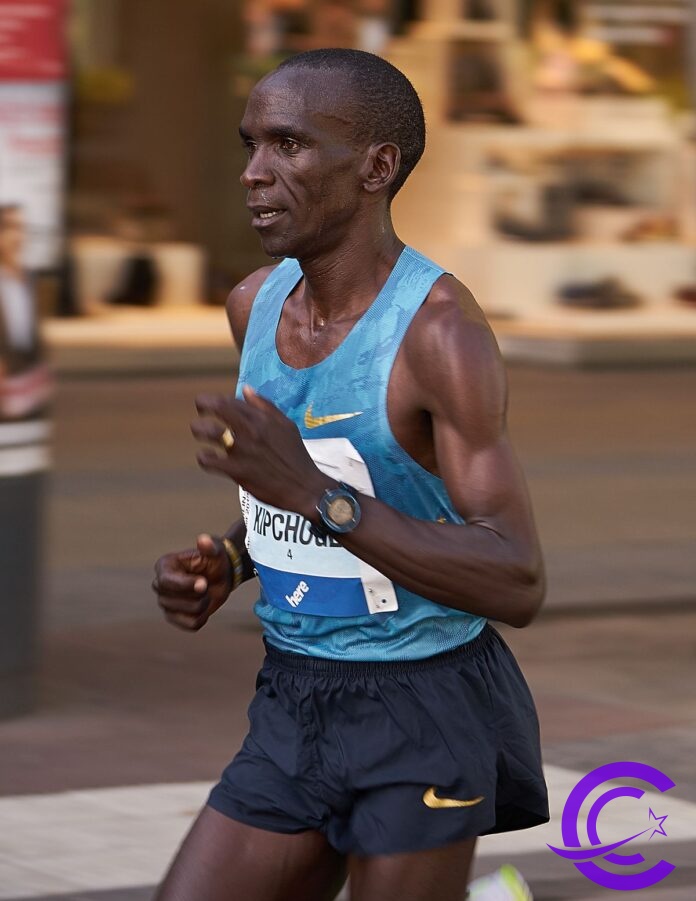 Perhaps, this difficulty and a lot of hard training with his coach Patrick Sang were the reasons behind his current success as a long-distance runner.

Due to this, he is now known to the world as one of the richest runners. Kipchoge has also supported many organizations and helped numerous people.

Meanwhile, before heading on, let us look at the quick fact table, shall we?

Eliud Kipchoge: Net Worth and Endorsement

As a result of extremely high performance, Eliud has secured a great reputation and net worth of $3 million.

Consequently making him one of the wealthiest long-distance runners. This fortune was undoubtedly raised by participating and winning many worldwide championships while also creating new world records.

Furthermore, he also earns by displaying stunts as he did back in 2018 in Berlin. His salary is about 5 million Kenyan Shillings per event.

Other than this, his other income sources include endorsement deals with Nike and other companies. These are well-reputed brands where he had partnered to create new models of marathon shoes.

In addition to this, the marathon runner has also signed a deal with Isuzu Car dealers and also Non-Fungible Tokens.

The Kenyan runner belongs to those who believe in simplicity. Despite his huge wealth, Eliud still loves the simpler things in life.

Although the path leading to Kipchoge’s training camp may be a dirt track, inside the main gate lies a garden filled with green grass and other plants.

Even when the camp is about 30km away from his house, he prefers staying there in Kaptagat.

Aside from being a famous runner, Eliud is also a farmer and a father. In his house located in Eldoret, Kenya, his children stay with their mother, Grace Sugutt.

Also, at home, the athlete loves running around and playing with his children. On his farm, he has been keeping cows, sheep, and chickens.

From his farm and his small house, he travels 40km to sell milk and other products to locals of the town.

After completing the 2018 Berlin marathon at about 2:00:45, Kipchoge was rewarded with a brand-new car by his sponsors.

The car was given as per the promise between Kipchoge and his sponsors, ISUZU because he needed to complete the marathon before 2 hours and 2 minutes.

Similarly, the ISUZU D-MAX double Cab 2019 is worth 5.9 million Kenyan Shillings (about $54k). This precious event caught live on camera is available on Youtube and other media sources.

Moreover, he has also inspired many electric cars and vehicle companies to create a better future for Africa.

In contrast to others, Kipchoge has a relatively simple lifestyle. He doesn’t believe in having expensive show-off items and luxurious life.

Nonetheless, the athlete loves to maintain a healthy lifestyle. Every morning he wakes up early, sometimes even before sunrise, and runs with many others.

From what we know, Eliud is a very organized person who believes in hard work.

Therefore, it is no surprise that despite being a millionaire, after his morning breakfast, he is seen trimming the plants or even cleaning the toilet, utilizing every bit of time he has.

Apart from this, he also loves reading motivational books, his favorites being “7 Habits of Highly Effective People.” After his retirement, Kipchoge has plans to open a sports store.

As a result of the COVID-19 pandemic and lockdown, he spent his time with his family like everybody else. He also constantly visited his farm after his morning routine.

The Kenyan runner has joined many different types of councils and organizations to solve some of the burning issues across the nation and the globe. Malaria, one of the deadliest diseases, is not a new disease in many nations of Africa.

Indeed, Kipchoge became a part of the “Malaria No More UK Leadership Council” with hopes of controlling this disease.

Also, through his charitable organization, food is distributed to young future athletes in Kenya. He accepted the London Marathon Challenge intending to inspire the coming generations and continue the trend.

Furthermore, another wonderful attempt to support conservation, educational development, and community projects in Kenya was successfully conducted with our runner.

Also, he ran in solidarity with Kenyan wildlife rangers and encouraged everyone to participate from where they were.

Hence, these are just some of his greatest contributions. Many of the activities have not even been covered by the media.

Despite all that, he truly is an inspiring person and a true hero.

The marathon runner has had a major role in filmography. Kipchoge has played his role in the TV Series “The London Marathon,” which is ongoing from 2015 to date.

In addition to this, he can also be seen in the “2020 Laureus World Sports Award” and a TV mini-series “Rio 2016: Games of the XXXVI Olympiad.”

Moreover, a new documentary about him is planned to be released in 2021 with the title “Kipchoge: The Last Milestone.”

Besides being a famous runner, there is no doubt that Eliud is the inspiration for many writers to write wonderful stories about his past, his passion, and many more.

Some of these writings include “Eliud Kipchoge – History’s Fastest Marathoner,” “Two Hours: The Quest to Run the Impossible Marathon,” and “Running the Dream: One Summer Living, Training, and Racing with a Team of World Class Runners Half My Age.”

Also, “No Human Is Limited: The Autobiography of the First Man to Run a Marathon in Under Two Hours” is one of Kipchoge’s creations that we highly recommend reading.

Kipchoge’s career started in 2002, and after winning the junior race (2003) event, the runner won his first individual world championship title. At the young age of 18, he already claimed the title of senior 5000m World Champion.

In addition, this was followed by him winning a bronze medal in the Olympics of 2004 and a silver medal in 2007. By this time, Kipchoge was already a five-time 5000m World Championship finalist.

Furthermore, he had also won the Olympic marathon in 2016. Soon in 2018, the Kenyan runner also established a new world record by completing a marathon at 2:00:45 and was awarded a car.

Likewise, this record was also broken by himself in October 2019, and a historic achievement was created.

After setting a new marathon record and becoming the first-ever person to complete a marathon within less than 2 hours (1:59:40), it’s no wonder why he is famous all over the world.

Eliud Kiploge is a kenyan runner. Does his nationality have to do something with his accomplishment?

Firstly, Eliud Kiploge is a Kenyan and was born, raised in Kenya itself. According to some research, there was a finding that Kenyan runners were excellent.

Many factors favor them and make them fit for running. Firstly, the result of multiple physical activities like running, walking long distances from an early age.

Lastly, as Kenya is not a developed country, achieving success for economic reasons is a push to the athletes.

Hence, this is the reason why being a Kenyan Eliud Kiploge is a perfect runner.