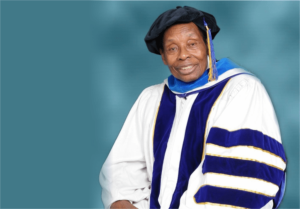 Ezekiel Handinawangu Guti (born 5 May 1923) simply known as Ezekiel Guti, is the founder of Zimbabwe Assemblies of God Africa (ZAOGA), a Pentecostal Christian church that broke away from a South African Pentecostal church, the Apostolic Faith Mission, in 1959. ZAOGA is also known internationally as Forward in Faith Ministries International and is headquartered in Waterfalls, Harare, Zimbabwe.

Guti was born in Ngaone, Chipinge, Manicaland Province, Zimbabwe on 5 May 1923.

The church is established in over 143 nations, with over 2,000 churches in Southern Africa. Guti has ministered for over 50 years and spoken in several countries. He has founded seven Bible colleges named Africa MultiNation For Christ College, with three in Zimbabwe, two in Mozambique, one each in Zambia and Ghana. He has also founded various ministries including Forward in Faith Children’s Home, Children’s Ministry, Africa Christian Business Fellowship, the Gracious Women’s Fellowship, along with the Husband’s Agape International Fellowship. He has written over 69 books on his teachings.

Guti’s academic credentials include BA; MA; DD; D.Min and a Ph.D in Religion. He holds a Bachelor of Christian Education and a Doctorate from Northgate Graduate School and Zoe College, U.S.A.

He initiated the building of Zimbabwe Ezekiel Guti University in Bindura-Zimbabwe (for which there was some controversy regarding land acquisition), and the Mbuya Dorcas Hospital in Waterfalls-Harare. He oversees over five thousand pastors and evangelists worldwide

The ministry was begun under a gum tree on 12 May 1960 in Bindura, Zimbabwe.

On the international arena, Guti has accepted invitations to preach in several African nations as well as in Europe, the United States, Asia-Pacific countries, and the Bahamas, and has spoken in Bible schools, colleges, universities, and on television and radio programmes.

Guti is married to archbishop and prophetess Eunor Guti. Their son, Ezekiel, who suffered from speech impairment and physical disabilities, drowned in a swimming pool in December 2017.

I thank God that in my quest to know the background of the man, I had to travel all the way to a place he had an encounter with God. Being well familiar with the terrain and the place of Ngaone I could imagine how it was like back then in the 1920s. It is believed through the book, AFRICAN APOSTLE which was written by Gayle Erwin that one day Ezekiel’s mother went to a certain place where she heard someone preaching about the punishment of all the sinners. It is believed that this story from his mother gave him a sleepless night, He asked his mother the next day if she could show him a man who was going to tell him about Jesus.
Since there was no one to teach him, it is believed that he took it upon himself to go into the jungle to seek the deliverance from the wrath that awaited all sinners as per his mother’s story. He cried, ‘’CREATOR IF YOU ARE THERE SAVE MY SOUL ‘’.

As he Lay under the tree Day after Day it is believed that one of the Days an angel appeared to him and uttered these words , ‘’FEAR NOT, SIN NOT’’ . It is this encounter that prepared him for all the other experiences that he later encountered in his walk with Christ. In particular the founding of this great family that most of us belong to – ZAOGA FORWARD IN FAITH MINISTRIES INTERNATIONAL

In 2018 Guti was listed as the 9th-richest person in Zimbabwe, with an estimated wealth of $998 million.

A gifted evangelist, Prof E.H. Guti has distinguished himself as a leading personality in the Pentecostal world. Ezekiel Guti’s net worth as of 2021 is estimated at $205 million.