Gordon Hayward is estimated to have a net worth of $60 million.

In the 2017-18 season, he posted his best scoring season, averaging 21.9 PPG. Furthermore, he also got his first All-Star selection that season.

Alongside playing basketball, Hayward is also an avid lover. Moreover, he is the first NBA player to have a sponsorship deal with an e-sports company. 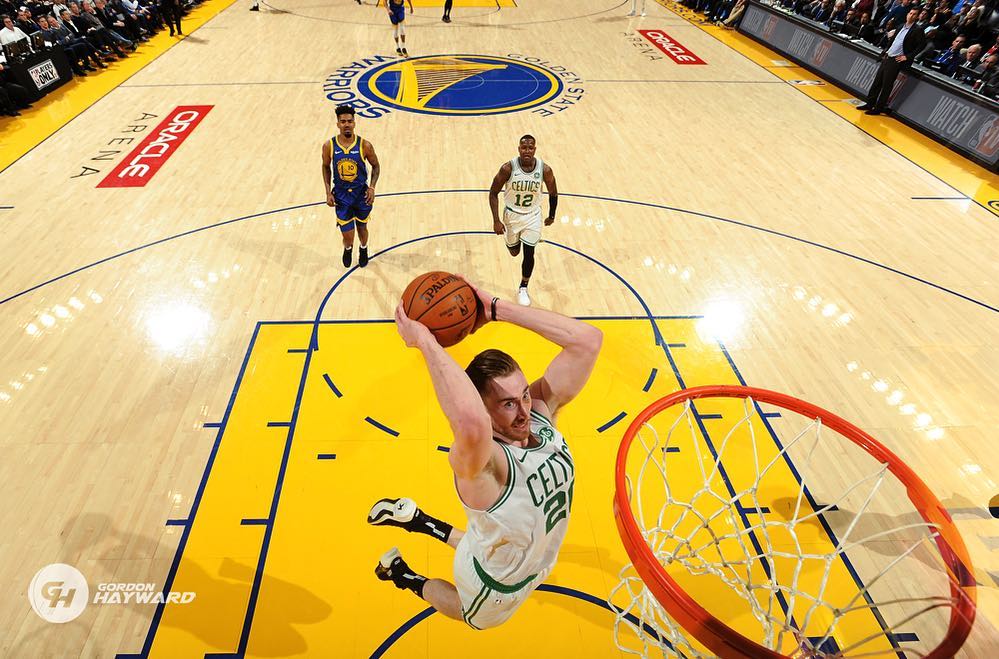 Not only making money, he definitely invests it. At present, Hayward lives in an 8,800 sq ft $4.7 million mansion which is purchased in 2021.

While playing with the Celtics, he used to live in a $3 million mansion.

Gordon Hayward | Salary and Net Worth

Gordon Hayward definitely has earned huge salary contracts in his NBA career. However, there has been criticism regarding his contract; one thing for sure he is definitely getting paid.

Later, he entered as a restricted free agent in 2014 free agency. However, his offer sheet was Jazz and signed a $63 million 4 year deal.

Likewise, in the 2017 summer, he was an unrestricted free agent. He met with two NBA teams Miami Heat and Boston Celtics, to discuss his future.

Later, Hayward and Celtics agreed on a $127.8 million free-agent deal for 4 years period.

Despite missing a whole season due to injury in the first game, he made $29,727,900 in his debut season with Boston Celtics.

Before the start of the 2020-21 season, Hayward had the player option. Later, he signed 4 years $120 million deal with Charlotte Hornets, turning down $34.2 offered by the Celtics.

Currently, he makes $28,500,000 from the first year of his contract. Likewise, he is the highest-paid player in the Hornets squad and ranked 35th in the league.

According to various online sources, the estimated net worth of Gordon Hayward is $60 million.

Hayward has a shoe deal with Chinese company ANTA. He signed with ANTA in 2018 after becoming shoe free agent. Moreover, he mainly used to wear his idol Kobe Nike shoe in-game before.

Furthermore, ANTA has already released 2 of his signature shoes. His first shoe, GH1, was released in 2018, whereas GH2 in 2021.

Hayward is an avid gamer. Mainly he likes to play League of Legends and also likes streaming his gameplay.

In May 2016, he inked an esports endorsement deal with Hyper X. Moreover, he became the first Nba player to sign a deal with an esports company.

Likewise, he also has gaming endorsement deals with Xfinity and AutoFill.

Riot Games released an animated commercial of his ankle injury recovery in 2018. Likewise, The Athletic and The Players Tribune also documented five video series of his recovery journey.

According to Dicks Sporting Goods, the Hayward jersey was the 13th best-selling in the NBA in 2017.

Later, profits from T-shirts sale was donated to the Massachusetts Society for the Prevention of Cruelty to Children.

Similarly, in 2018 Hayward and his wife tipped off “Her Time to Play” camp for Boston local girls.

During his time in Boston, he also raised funds from streaming to help Boston Children’s Hospital.

Gordon Hayward mostly likes to spend his time with his family members. Moreover, he has shared his many family moments on his social media handles.

Talking about fitness, he likes to perform weighted strength training and follows a strict diet.

Similarly, the mansion has 5 bedrooms and 8 bathrooms. In the main entry, the house has double doors guarded by lion statues.

His new crib also includes a master suite with dual bathrooms and a walk-in closet.

Besides it, other features of the mansion are a golf course, media room, wine cellar, and an elevator.

During his spell in Utah Jazz, he bought a $3.35 million mansion in Rancho Santa Fe. It is a Spanish-style house with a 7,550 sq ft area. It had 6 bedrooms and 8 bathrooms.

His Fishers mansion has a pool, wine cellar, outside kitchen theatre, fireplace room, and ornate woodwork unfold all over.

The expensive car in his garage is Lamborghini Aventador which he recently purchased for $4,50,000.

During his rookie season with Utah Jazz, he played in 72 games. Moreover, he started in 17 of those averaging 5.4 PPG and 1.9 RPG.

Next season his role remained the same; however, he became a more efficient player. Likewise, he was also selected for the 2012 Rising Stars Challenge.

As the year progressed, Hayward evolved into an offensive threat against any team and posted a decent average every season.

However, with Utah Jazz, he was selected for his first and only All-Star appearance to date in his final season.

After signing a mega-contract with the Celtics, he suffered a season-ending injury only in his first 2017-18.

But he has considerable progress after surgery for the Celtics.

What is Gordon Hayward’s salary?

Moreover, he earns $28.5 million, currently making him the highest-paid player on the Charlotte Hornets roster.

Who are Gordon Hayward’s sponsors?

Firstly, in 2016 Hayward signed with Hyper X, an e-sports brand. Moreover, he was the first NBA player to sign a sponsorship deal with an esports company.

Later in 2018, he signed with Anta. Furthermore, Anta has already released his 2 signature shoes GH1 and GH2, to date.

Where does Gordon Hayward live?

After signing with the Hornets, Hayward purchased a new mansion in Charlotte worth $4.7 million in January 2021.