As of 2021, four times NBA All-Star basketball player Joel Embiid has earned a total net worth of $35 million.

The Cameroonian NBA player Joel signed a five-year contract with the Philadelphia 76ers in 2017, worth $178 million.

Moreover, this high-achieving basketball player gained 48th ranking in the Forbes list of the World’s highest-paid athletes in 2019.

Even though Joel was all set to play volleyball in Europe, he started playing basketball at 15, and there was no looking back from that moment. 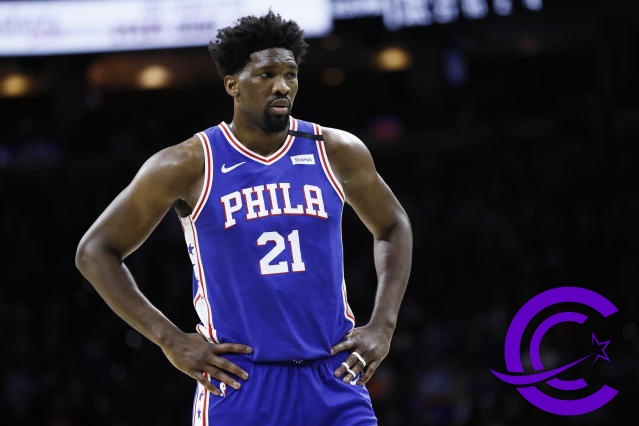 Born to a military officer Thomas and Christine, in Cameroon, Joel moved to the United States at 16 to become a professional basketball player. During his high school career, Rivals.com listed him as a five-star recruit.

Furthermore, Joel got drafted with the third overall pick by the Philadelphia 76ers, which made him the highest selected player from Cameroon.

Let’s check some quick facts about Joel before we go any further.

Coming from a country like Cameroon, Embiied has made a massive fortune for himself. Joel makes most of his earnings playing professional basketball.

Additionally, he endorses popular brands like Amazon, Under Armour, Hulu, Mountain Dew, and more. Such endorsements add $6 to $10 million to his earnings every year.

Adding up Embiid’s basketball earnings and endorsements, his total net worth reaches up to $31.2 million, which is likely to grow with his growing popularity.

Everyone is familiar with Embiid’s funny persona and his social media popularity. This kind-hearted phenomenon is living a luxurious life.

Where is Joel’s house located?

Embiid lives in Philadelphia with his girlfriend Anne de Paula and newly born son Arthur where he owns a $2.1 million apartment.

Talking about his apartment is located on the 48th floor of the building and is 2,250 square feet with three bedrooms and three and a half bathrooms. For now, Joel is happy in this cozy and scenic apartment.

Besides his apartment, Joel bought a new house for his parent in Cameroon. The actual price of the home is unknown for now, but it should worth a million dollars.

Buying this house was a way of removing the horrific memory of his brother’s death.

What car does he ride?

When it comes to cars, Joel did not buy a car until 2017 because he did not have a driver’s license. Therefore, he used to travel around in Uber. Later, Embiid bought himself a Range Rover.

Now, NBA star Joel enjoys navigating in a stylish car on the street of his resident city.

If one has observed Joel, he seems to spend more on clothing and shoes than anything else. He had been seen wearing unique and stylish shoes on the court and outside.

Embiid has it all to his exposure to put him on the list of the wealthiest NBA players.

Joel must have faced a tough time transitioning from Cameroon to the United States. Learning how to drive to eating healthy was difficult for Joel.

Now, Joel is not just a basketball player; he is a star who has established himself on the forefronts of successful and wealthiest athletes. He lives in the central Philly area, drives luxurious cars, and vacations in great locations.

Even though Joel can afford almost anything for him, he is always ready to help and support his friends and family.

What kind of charities does Joel do?

Joel is famous due to his excellent performance on the basketball court and for his charitable works. Last year, Embiid donated $500,000 as a coronavirus relief endeavor.

Moreover, he gave away another six-figure donation for antibody tests for healthcare workers.

In total, he committed to donate $100,000 to fight homelessness, which he received from the NBA All-Star Game.

His support will provide meals, essential clothing items COVID-Vaccines to homeless and underserved people, and special funds for homeless youth.

After Joel announces his donation, the Philadelphia 76ers also declared that they would donate $100,000 for the same cause.

Likewise, Embiid has established a foundation to fight poverty in Cameroon, which his parents run.

Players like Embiid has become a significant role model for fighting social inequalities.

The 7-foot tall athlete, Embiid, is also famous for various endorsements. In 2018, Joel signed a five-year contract of footwear and clothing endorsement deal with Under Armour.

Signing that deal, Joel was able to break the stigma. Additionally, he said when he looks at himself, he is not a big man but a guard who would do everything on the basketball court.

When he signed with Under Armour, Embiid said that basketball had given him everything, and this has to be bigger than basketball.

Moreover, the deal with Under Armour made him the highest-paid NBA center.

In addition to the handsome money he gets, the Baltimore-based brand Under Armour has offered him other good works like charity commitments for Philadelphia and his hometown Cameroon.

An Insta post where Joel is thankful for being a part of Under Armour.

From endorsements only, Embiid makes $6 to $10 million every year.

There is a lot to talk about if we want to touch on the subject of Joel’s career. But let’s make it short and discuss the most significant events and achievements.

Before coming to the States, Joel played volleyball and soccer as a kid, and he was all set to play volleyball professionally in Europe.

But his career goal changed when Luc Mbah, a Moute, a Cameroonian NBA basketball player, noticed him at the basketball camp. 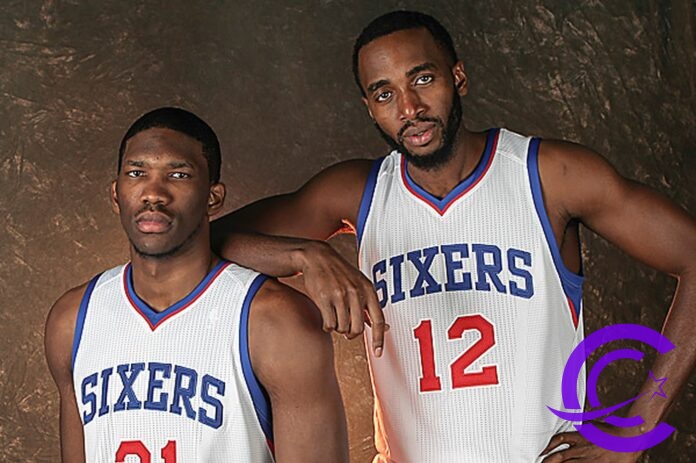 Joel with his mentor and NBA player Luc Mbah a Moute

Luc Mbah a Moute invited him to come to the US and play high school basketball.

After years of high school and college basketball in the States, Embiid got selected by the Philadelphia 76ers at the 2014 NBA draft with 3rd overall pick.

Unfortunately, Joel had to miss the first two seasons (2014-15 and 2015-16) due to his injuries. Yet, he did not give up and came forth with more passion and positivity.

Finally, Joel debuted as the 76ers on 4 October 2016 when he scored 6 points, four rebounds, and two blocks with a win for his team against Boston Celtics.

After a successful rookie year, Joel signed an ambitious contract with the 76ers worth $148 million in October 2017, which will continue until 2023.

Then, Joel is likely to continue as a free agent if other teams do not pursue him.

Last February in 2021, Joel scored his career-high 50points and 17 rebounds against the Chicago Bulls.

This successful player has acquired success, wealth, fame, and love in an equal manner. At the same time, Joel has been trying to give back to people through various causes and organizations.

How much does Joel Embiid make per season?