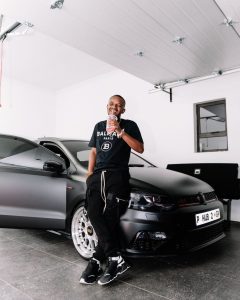 Kabelo Petrus Motha (born 27 November 1992) better known by his stage name Kabza De Small, is a South African DJ and record producer. He was born in Mpumalanga and raised in Pretoria. He was born on the 27th of November 1992. He has been referred to as the king of the Amapiano genre. Motha has collaborated extensively with record producer DJ Maphorisa.

Kabelo Motha was born in Mpumalanga, South Africa, and was raised in Pretoria Motha began his career as a DJ in 2009, venturing in the genres: Afro-fused house and EDM. In 2016, he made his production credits by releasing his debut album, Avenue Sounds under the label, House Afrika Records. In November 2018, he gained attention by releasing songs, “Amabele Shaya” and “Umshove”, respectively, featuring guest vocals by the amapiano counterpart, Leehleza. Following both songs, he continued his collaboration with Leehleza as he released the song “Bamba La”, on 3 January 2019.

Scorpion Kings, Motha’s collaborative studio album with record producer DJ Maphorisa, was released on 5 July 2019, supported by the lead single, “Koko”. The album was certified diamond in South Africa, with over 100, 000 units sold. On 1 October 2019, they released their sophomore studio album, Piano Hub, which was supported by the single, “Nana Thula”, featuring guest vocals by Njelic. On 18 October 2019, Motha released his second studio album, Pretty Girls Love Amapiano. In continuing his collaboration with DJ Maphorisa, they released their third studio album, The Return of Scorpion Kings, on 29 November 2019.

On 4 April 2020, during the COVID-19 national lockdown period, he released an EP titled Pretty Girls Love Amapiano 2, it features Tyler ICU, DJ Maphorisa, Xolani, King Deetoy.
On 26 June 2020, he released his next solo studio album, I Am The King Of Amapiano: Sweet & Dust, featured both South African & international acts such as Burna Boy, Wizkid, Cassper Nyovest, Dali Wonga, DJ Maphorisa, Samthing Soweto, Sha sha, Mlindo, Bontle Smith.
In October 2020, he produced Oscar Mbo’s single titled Genesis from the album, For The Groovists. Motha took-home Music Producer of the Year award at the 2020 African Muzik Magazine Awards.
On 9 April 2021, Kabza released Rumble in the Jungle, a collaborative album with record producer DJ Maphorisa and singer TRESOR.
At the 27th South African Music Awards he received three nominations includes; Album of the Year, Male Artist of the Year and Best AmaPiano Album, which made him the most nominated artist, for his album I Am The King Of AmaPiano: Sweet & Dust.

On September 17, 2021, he released a single “Abalele” with DJ Maphorisa featuring Ami Faku. The song reached number one on Entertainment Monioring Africa.
In October 2021, he produced Congolese-born singer TRESOR’s singles, “Makosa” and “Nyota” from the album, Motion.
Motha is often referred to as the “King of Amapiano”.He is considered one of the best-selling music artists of amapiano, and also one of the pioneers of the genre. With his breakthrough in 2018, he played an instrumental role in popularizing the amapiano genre. On 3 December 2019, Spotify South Africa, named Motha as the most-streamed South African artist in the platform for 2019.

Kabza De Small is one of the richest musicians in South Africa with an estimated net worth of around $900, 000 – $15 million.