MLB is one great platform where a player with a natural affinity for baseball can come out and explore.

Well, we have one such great player to talk about who is a four-time All-Star winner. He is none other than Madison Bumgarner.

To specify, Madison is an American baseball player for Arizona Diamondbacks of MLB. He has served as a pitcher to date. He has already crossed a decade in this field and has managed to conquer new heights.

It will be a genuine disregard if we do not put up this above all. Madison also has notched World Series Champions three times in a row. 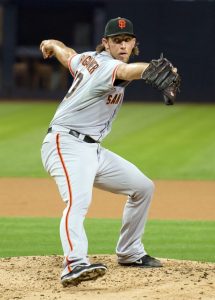 We will include all about his early life, MLB career, wife, net worth, and social media handles in this article. So, stick with this and read until you complete it.

Madison was born on August 1, 1989, to his parents Kevin and Debbie, in Hickory, North Carolina.

He does not have his own sister or brother but has a list of two half-brothers, a step-sister, a half-sister. Sadly, we are not aware of their names.

Moreover, the place where he stayed was nicknamed “Bumtown,” as many people with the surname Bumgarner lived there.

Madison is a Christian by heart and holds up an American nationality.

Surprisingly, according to online sources, the first word that he uttered was a ball, and since then, he has devoted himself to baseball at the age of four. He committed to a youth baseball league.

Let’s talk about the sapiens who have always stood behind Madison and showered him with immense support.

His father, Kevin, works at a food distribution company. He has also built a house for his family. It was heard that he prohibited his son from throwing the curveball until his son turned sixteen. But anyway, he is supportive of his son.

His mother, Debbie, is an accountant by profession at PepsiCo, multinational food and beverage cooperation.

She frequently watches her son’s games on tv and also stood up in a queue to get her son’s signature as his huge fan.

Debbie and Kevin got separated during Madson’s high school days. Kevin currently resides with his wife, Tracy, in Hudson, NC.

Dena, who is Madison’s half-sister, died in 2010 after taking an overdose of painkillers as she was battling cancer and was hospitalized.

She had a son, too, and was engaged. Ultimately, Madison was close to her, and they both were brought up in the same house.

He committed to South Caldwell High School, where Madison was nicknamed “Maddie.” He played for both the school baseball team and the American Legion Baseball (where players aged 13 to 19 played).

As a junior, Madison led his team to a second finish in the 4A State Championship with a 12-2 win-loss record, gathering 0.9 ERA, 120 strikeouts in 84 innings.

No wonder, the next season, the guy grabbed a victory over the state championship.

Following that, he was also called, The Carolina Peach by the scouts and agents from Bumgarner that his father had to build a wall around the bullpen to keep him distracted in his high school.

Not to mention, he was listed on the male athlete list  “100 to Remember” by the North Carolina High School Athletic Association.

The San Francisco Giants drafted him in the first round, with the tenth overall pick of the 2007 MLB draft. Madison was regarded as the 14th best prospect by Baseball America.

He was the first pitcher since Matt Cain from his high school to be selected for the NFL. He was again ranked third by Baseball America in 2008. But there were ups and downs in his rankings by the sports magazine.

Finally, Madison had his dream come true when he arrived to play for the major league in September 2009.

Baseball America, the sports magazine, again titled him as a starting pitcher in the 2010 All-Rookie Team. They also took over World Seris Championship in 2010.

In 2011, at Dodger Stadium, he almost threw his career’s first complete-game shutout in a play against the Los Angeles Dodgers. Furthermore, he hit his first home run in the major league in 2012.

For May 2014, he was titled NL Pitcher of the Month. Likewise, the MLB player became the first pitcher to hit a home run against Kershaw.

Madison signed an extension contract until 2017 worth $35.56 million. Furthermore, the baseballer sustained a shoulder injury in a dirt bike accident in 2017.

As a result, he missed some of the games. Bumgarner had to have his hand in a sling after falling off a rented Honda bike.

Not to mention, he apologized to each and every one of his teammates for not being there for them. Madison also admitted that it was “not the most responsible decision.” Besides that, he went on playing for the Giants until 2019.

After leading a long and playful journey with the Giants, Madison was a free agent until he inked a five-year contract with the Diamondbacks, worth $85 million in December 2019. He had a  struggling and shortened season with the squad in 2020.

Moving on to his personal life, Madison is a baptist since his early days of life.  He is considered outgoing and extroverted, but when you meet him in person, he is calm, composed, and friendly.

This is something precisely meant by a reporter, Andrew Baggarly. Well, this must be a well-known fact to the Madson fans out there, he married his long-time girlfriend Ali Saunders on February 14, 2010. With his wife, Ali

Almost a decade here again. It seems like Madison is lucky both in love and work. They went to the same high school and eventually fell in love. Their brain cells must have triggered together most probably.

They exchanged the vows in a private ceremony, where Madison dressed up all cool and casual, wearing a white shirt and blue denim, and Ali wore a beautiful pink gown.

And meanwhile, the groom did carry a pocketknife too—common who carries a pocket knife, something unusual to hear of. During her high school days, Ali played softball, was a former lifeguard, and currently serves as a fashionista. They both are together to date.

There is no news of their separation by far. And there’s no information when it comes to his kids. But he is awfully close with his friend, Tim Hudson’s children.

Sadly again, we are not aware of their names. The pair stay on a farm in Granite Falls usually but off the court, they reside in San Francisco.

Madison made an appearance at Jimmy Fallon’s The Tonight Show where Fallon interviewed him.

During the interview, it was heard that he gifted Jimmy Fallon, the MadBurn’s underpants. In episode 154 of season 1.  He also bought his wife a cow.

He signed up an endorsement deal with Carhartt and Ford, and Jockey.

He is thirty-one years old by now. Madison is one heck of a gentleman. He is 6 feet 3 inches tall and weighs around 115 kg. We are still not aware of his body measurements as in biceps, waist size, and all.

Madison often comes in the news for his different hairstyle. He keeps in long sometimes and moves back to a short haircut according to his mood and vibes. He also likes to keep a beard most of the time.

But no matter what, he is clean-shaved or long-bearded, he is always the hottest. Stylish as hell and a livable personality adds a lot to his charm.

Madison Bumgarner | Net Worth And Salary

What can we expect about his lifestyle if a sportsperson has already remained a three-time world series champion and much more? Of course, Madison is a very demanded player who has got both experience and talent without any denial. Talking about his contract and salary details, Madison signed up for the Arizona Diamondbacks agreeing to the deal worth $85,000000.

MADISON BUMGARNER REPORTEDLY MAKES A NET WORTH OF AROUND MORE THAN $25 MILLION AS OF 2022.

Not to mention, Madison also owns a  100-acre property in Caldwell County, N.C. And he also had a customized car, Ford Shelby GT350, that he put for auction last January.

Moreover, Madison and his wife Ali are doing good in their profession, which adds up to their healthy and wealthy life.

Sadly, Madison is not that kind of a Socialite. He is not at all active on any social media. He keeps his personal life really private.

Even his wife, Ali Bumgarner, now, previously Saunders, has kept her Instagram profile private. She has 501 posts on her Instagram handles and has 884 followers.

What is Madison Bumgarner’s velocity?

Does Madison Bumgarner have a child?

No, there is no information on Madison’s kids.

Where is Madison Bumgarner’s ranch?

The Pitcher’s ranch is near a small town in Hudson, North Carolina.