Madoxx Ssematimba (aka David Ssemanda Sematimba) was born in Kampala, Uganda  in 1972. He attended Makonzi Boarding Primary School and Busoga College, Mwiri. After secondary school he worked as a primary school teacher with ‘Christian Life Children’s’ Home’, a school that was one of those funded by an NGO called ‘Feed The Children’.

Madoxx Ssemanda Sematimba is the stage name for the Ugandan roots reggae musician David Amon Ssemanda Ssematimba.  He is popular in Uganda for his reggae ballads in Luganda, lives in Kampala, Uganda. 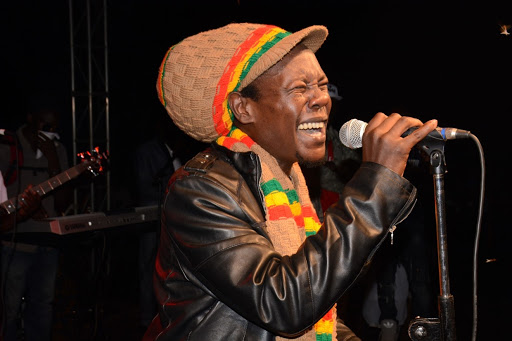 Ssematimba was born in Kampala in 1972. One of Uganda’s Music Legends who have contributed so much to the Uganda’s Music industry. He attended Makonzi Boarding Primary School and Busoga College Mwiri. Before choosing a path in music, Ssematimba worked as a primary school teacher. He relocated to Stockholm, Sweden in 1991, when he was 21 years old. While performing in night-clubs to pay for his computer studies, he met Kenneth “Mafo” Ssejjemba Magoye, a fellow musician, who introduced him to Aggrey Ssembatya, the proprietor of Small Axe Productions. He moved to Gothenburg where he eventually began work on his albums at Small Axe Studios. He wrote, composed, arranged, programmed, performed, co-mixed and produced all the songs on the albums while Aggrey engineered and co-mixed the albums.

Maddox is a reggae musician who sings in Luganda. Released in 2000, Madoxx’s first album named Tukolagane included the singles “Namagembe”, “Tukolagane”, “Omukwano Gwafe” and “Eddembe” . He followed up in 2006 with the album Abato, with singles like “Nakatudde”, “Leka Nkulage”, “Easy” and “Wansonyi”. Influenced by Gregory Isaacs and Israel Vibration to name but a few. He continued to perform until 2009 when he returned to Uganda, but had reportedly left the music business a year later. Since 2014 Maddox has been performing locally. He has two children.

Madoxx in 1991 made a choice to leave the country and relocated to Stockholm, Sweden at the age of 21 years old. This is where he further developed his musical career and got more skills as he pursued computer studies as well as performing in night clubs to raise his tuition.

While in Sweden, Madoxx met fellow artiste Kenneth “Mafo” Ssejjemba Magoye. In addition, Kenneth later linked him to Aggrey Ssembatya, the then proprietor of Small Axe Productionsin Gothenburg where worked on his albums doing the song composition, writing,  programming, performing co-mixing and producing

In 2006, Madoxx further dropped the Abato album, with singles like “Nakatudde”, “Leka Nkulage”, “Easy” and “Wansonyi”. Therefore these made rounds all over the Ugandan music scene.

Ssematimba, however, continued to perform until 2009 when he returned to Uganda. However, he had reportedly left the music business a year later as he was rumoured to be in bad health. In addition, and chocking on debts while in Sweden.

However 2014, Maddox has been performing locally after a series of combined efforts by both his family and we’ll wishers jointly came together to revamp his musical career after taking him to a rehabilitation center.