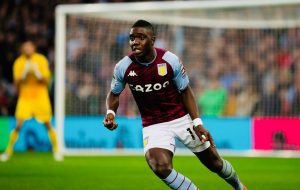 Marvelous Nakamba (born 19 January 1994) is a Zimbabwean professional footballer who plays as a central midfielder for Premier League club Aston Villa and the Zimbabwe national team.

Born in Hwange near Victoria Falls in Zimbabwe, Nakamba made his senior debut with local team Bantu Rovers in 2010, aged 16. He left the country in July 2012, and had trials at French side Nancy.

Nakamba officially joined Nancy on 24 December 2012, aged 18, for an undisclosed fee. He received the international clearance seven days later, and was assigned to the reserve team in CFA.

On 9 May 2014, Nakamba played his first match as a professional, starting in a 3–1 home win against Angers SCO. He played his second match seven days later, coming on as a late substitute in a 0–0 away draw against AJ Auxerre, and a new deal was offered to him on 19 May.

In July 2014, Nakamba went on a trial at Eredivisie side Vitesse. On 13 August, he signed a four-year deal with the Arnhem side aged 20 years. Nakamba made his debut for the club on 27 September, coming on as a late substitute for Kelvin Leerdam in a 6–2 away win against Dordrecht. Nakamba started to establish himself in Vitesse’s starting eleven during the 2015–16 campaign and went on to appear thirty times, scoring once against local rivals De Graafschap in a 2–2 draw.

He played as Vitesse won the final of the KNVB Beker 2–0 against AZ Alkmaar on 30 April 2017 to lead the club, 3-time runners up, to the title for the first time in its 125-year history.

On 20 June 2017, Nakamba joined Belgian side Club Brugge on a four-year deal for a fee around the margin of £4 million, aged 23 years. He made his league debut for the club on 29 July 2017 in a 4–0 away victory over Sporting Lokeren. He was replaced by Hans Vanaken in the 75th minute, having picked up a yellow card.

On 1 August 2019, Marvelous Nakamba signed for Aston Villa aged 25 years, for a fee of €12 million. He joined up with former Club Brugge team-mate Wesley Moraes and former Club Brugge player Björn Engels, who had already joined Villa in that transfer window. Nakamba made his first appearance for Villa in a 6–1 emphatic victory against Crewe Alexandra in an EFL Cup game. After the game, Zimbabwean footballer Peter Ndlovu confirmed that Nakamba would have a statue built in his honour in Hwange, as he was only the 4th Zimbabwean player to play in the English Football League. Nakamba made his Premier League debut on 16 September 2019, in a 0–0 draw against West Ham at Villa Park.

In October 2019, a video purportedly showing racist chants from Aston Villa fans about Nakamba and teammate John McGinn surfaced, and was condemned by the club.

Nakamba was voted by fans as player of the month for November 2021, following a string of good performances under new Aston Villa manager Steven Gerrard. On 11 December 2021, Nakamba suffered a serious knee injury in a 1–0 defeat to Liverpool, the injury required surgery, with an estimated recovery time of 3 to 4 months, ruling Nakamba out of the 2021 Africa Cup of Nations.

Nakamba is a Zimbabwe international, having represented the country in the under-20 level. On 13 June 2015, aged 21 years, he made his debut with the main squad, coming on as a second-half substitute in a 2–1 win against Malawi.