Marvin Bagley is a professional basketball player who plays in the National Basketball Association.

He started his career in the basketball league with the Sacramento Kings. Furthermore, the basketballer was the NBA team’s first-round pick.

Besides that, he played collegiate basketball for Duke University. However, his journey with the Duke Blue Devils was quite brief.

The athlete announced his desire to enter the 2018 NBA Draft during his sophomore year. Bagley was introduced to the basketball world at a very young age. His father was a former basketball player.

Currently, he is a coach in the Amateur Athletic Union. Correspondingly, his maternal grandfather is a former NBA and Olympic player.

The NBA player has won many awards and received several honors.

Although he is one of the most hard-working players, injuries have halted his abilities. Nevertheless, the player is very keen to prove his worth and the doubters wrong.

Before getting into details about the Kings’ Power Forward’s life and career, here are some quick facts about him.

Marvin Bagley III was born in Tempe, Arizona, the United States. His parents are Marvin Bagley Jr and Tracy Caldwell.

Moreover, his father is a former collegiate basketball player. He played for North Carolina Agricultural and Technical State University.

On top of that, Marvin Jr. was a professional football player for the Arizona Rattlers. He played in the Indoor Football League with the Rattlers.

Currently, the father of three is a basketball coach in the Amateur Athletic Union. He coaches for the Nike Phamily.

Furthermore, the dad met his wife, Tracy, while playing for the Arizona-based football team. Together the couple has three kids; Marvin, Marcus, and Martay. Marvin Bagley III With His Parents And Two Siblings

The power forward’s brothers are equally into football like him. Marcus Bagely plays collegiate basketball for the Arizona Sun Devils, while Martay plays school-level basketball.

Likewise, Both brothers are exceptional in their levels. Besides that, the NBA player is the grandson of former NBA player Joe Cladwell.

He was selected in the first round by the Detroit Pistons and was the second pick overall. The grandfather also represented the USA in the 1964 Olympics.

Correspondingly, he assisted Team USA to a gold medal in the Olympics. Similarly, Caldwell is a two-time NBA All-Star and has received several honors.

So, it is safe to say that basketball runs in the family. Aside from that, Marvin III and his siblings were trained by their father.

As a freshman, MB3 played for the Corona del Sol Aztec. However, he transferred to Sierra Canyon School in his sophomore year.

Nevertheless, the basketballer wasn’t allowed to play that year because of California Interscholastic Federation rules. He received many recruitment offers for his outstanding basketball skills.

The power forward committed to play collegiate basketball with Duke University. Nonetheless, he didn’t play for four years. Instead, he chose to enter the 2018 NBA draft.

Recently, media outlets shone the NBA player into the limelight because of his father’s tweets. He made a weird request to the Sacramento Kings through social media.

The former basketballer and coach requested the team to trade his son. The tweet came after the Kings faced a loss in a match against the Houston Rockets.

However, Marvin Jr. quickly deleted those tweets. Nevertheless, nothing is deleted from the internet.

So, the tweet swiftly caught the media’s attention and was everywhere. The news spread so fast that the media requested Kings’ coach Luke Walton and Marvin III to comment on it.

In an interview with the NBCSKings, the coach said:

“We don’t listen to any of that. It’s us within these walls, us within this locker room. We’re in this together. Good or bad, whatever people are saying, we’ve got to do everything we can to not let that affect what we’re trying to get done here.”

Besides that, many people consider the father overly invested in his son’s career. Some of them have even compared him with LaVar Ball.

Ball is infamous for being too invested in his son’s basketball career. Furthermore, he loves to compare himself and his children to legendary players like Lebron James, Michael Jordan, etc.

The basketballer turned 23 Years Old on March 16, 2022. As an athlete, he takes great care of his health and diet. Moreover, he works out every day.

The power forward’s high school basketball career started with the Corona del Sol High School. However, he transferred to a different school in California after his freshman year.

Nevertheless, he was an exceptional player for the Corona del Sol Aztec. The athlete wasn’t allowed to play at Sierra Canyon School in his sophomore year.

Hence, he waited a year to show the school his true potential. Bagley had an outstanding senior year where he had 24.9 points per game.

Moreover, he was named to the 2017 All-USA Today First-team. Following his graduation from Sierra Canyon, the NBA player chose to attend Duke University. Marvin made his debut as the Duke Blue Devil in a win against Elon University. Furthermore, he helped the team win many games in his freshman year.

On top of that, he assisted the Blue Devils to the 2018 NCAA Men’s Basketball Tournament. Nonetheless, they didn’t get into the finals.

The player announced that he had decided to enter the 2018 NBA Draft following the loss.

The Sacramento Kings selected Bagley in the first round of the 2018 NBA Draft. Like his grandfather, he was also a second pick overall.

The power forward played against the Utah Jazz in his debut game as a King. Moreover, he proved to be a great asset to the Sacramento team.

However, injuries started to haunt him shortly after. In a game against the Golden State Warriors, MB3 sprained his left knee.

As a result, the basketballer missed 11 games. Nevertheless, Marvin was back to showing off his outstanding skills upon his return.

Nonetheless, the former Blue Devil sustained an injury at the beginning of the 2020 season. He was diagnosed with a non-displaced fracture in his right thumb.

Initially, he didn’t miss many games as the pandemic suspended the season. But Marvin suffered an injury to his right foot during practice after the season resumed.

Hence, he missed all of the 2019-20 season. Currently, the player is back on the court and is giving his best.

For the 2020-21 season, the athlete is yet to feel his best as he is still bothered by the effects of a left wrist injury. He sustained the injury in a game against the LA Clippers.

Even so, the NBA player is not listed on the injured list and is expected to play in future games. Many people have doubted his skills, so he desperately wants to shut their mouth this season.

Bagley’s earliest injury in the professional ground came back in 2018 in November. Back then, he struggled with back spasms.

Not even a month later, in December, Bagley sprained his left knee and missed out eleven games in total.

The next year in February, his knee injury bulged back. Following it, in October Bagley faced a non-displaced fracture in his right thumb.

Well, right then, he was sidelined for four to six weeks. In the meantime, the globe suffered from the novel coronavirus and the games were all in halt for the rest of the seasons.

On July 19, 2020, Marvin suffered a right foot injury during practice, which pretty much hindered his season’s games.

With the start of the new year, 2021, Bagley injured his wrist in January followed by a calf injury in February.

As for his recent injury was in May. Before it in March, he had a fracture of the fourth metacarpal in his left hand.

The basketballer is in a relationship with Rissah Lozano. He met her while he attended school in California.

Lozano is a former student-athlete who played volleyball for The Master’s University. Currently, she is working on getting a degree in Communications.

Besides that, she aspires to be a model and open her boutique someday. Rissah also wants to launch a clothing brand. 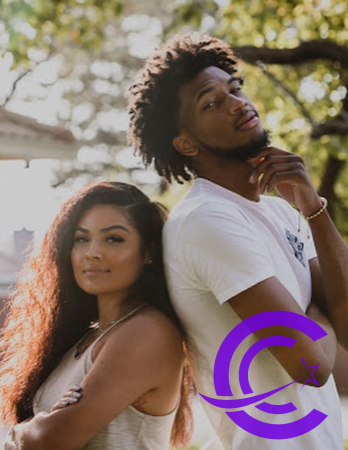 Furthermore, she has expressed her desire to work with athletic brands and independent stylists. Likewise, she is a very stylish person and suitable for a career in fashion.

From her Instagram account, you can gather that Lozano is a very supportive girlfriend. The TMU student often attends his games and post his pictures to flex her boyfriend.

At the moment, Rissah and Marvin are focused on their respective careers. Hence, marriage and kids are a bit far-sighted.

Marvin Bagley | Net Worth And Salary

The power forward has built an impressive wealth amount as a player in the NBA. Initially, the Sacramento team had signed a two-year deal worth over $15 million with Marvin.

After two years, they chose the option to extend his contract. Recently, he signed a four-year contract worth $50,365,025 with the Kings.

Moreover, the player’s salary this season is $8,963,640. Not to mention, he is set to earn over $11 million in salary the following season.

Besides that, he earns a good amount through sponsorships. Many well-known brands and companies like Mountain Dew endorse him.

Currently, the athlete has a five-year deal with footwear and apparel brand Puma. Furthermore, he is the brand ambassador of Puma Hoops.

The basketballer is quite active on social media platforms. Hence, he is on Instagram with 750 thousand followers.

The athlete usually shares his life as an NBA player on his account. Besides that, he has posed alongside his teammates.

He has also posted his workout routines and training sessions. Moreover, the power forward loves to flaunt his girlfriend on his handle now and then.

As he is also a rapper, he has some on-stage pictures and in-studio photos. Furthermore, Bagley has a Twitter handle with 98.4 thousand followers.

The NBA player usually shares basketball-related news and game highlights in his account. Being a brand ambassador, he promotes Puma through his social media platforms.

Although Marvin has sustained a slight wrist injury, he has not been placed on the injured list yet. He is still playing for the Kings in the regular season.

However, the severity of the injury is unknown, so it’s better not to keep our hopes up. Besides that, the player has been riddled with injuries in his previous seasons too.

What is Marvin Bagley’s salary?

Does Marvin Bagley have a brother?

Yes, the basketballer has two brothers. They are Marcus and Martay Bagley. Furthermore, both of them are basketballers.

The Bagley brothers also want to end up in the NBA like their brothers. As of now, they’re focusing on being better basketball players.

Marvin Bagley features in jersey number 35 for the Sacramento Kings.

To date, Marvin Bagley has played 118 career games among which he has started 52 of them. During the game, he has featured for an average minute of 25.5 per game.