The UFC had categorized fighters in various divisions based on their weight. The fighters weighing between 116 to 125 lbs (53 to 57 kg) are placed in the flyweight division.

Maycee might be a little messy outside the octagon, but she never misses a movement inside it. She had made a big name for herself at such an early age. She devoted her life to practicing and learning MMA. It won’t be wrong if we say that Maycee was born to be an MMA Star.

Today, we will be talking about Maycee Barber’s personal and professional life. Let’s get started!

Where is Maycee Barber from? Early Life and Family

Maycee Barber was born on May 18, 1998, in Greeley, Colorado, United States. She was born to proud parents Bucky Barber and Maryanne Barber.

Maycee is one of six children of her parents. She is the second oldest. Bucky and Maryanne Barber indulged almost all their children in martial arts at an early age.

Maycee got in Karate when she was three. In fact, she was eligible enough to teach martial arts to adults by the age of 13 at their family’s martial arts academy in Fort Collins, Colorado.

Bucky and Maryanne wanted their children to be strong and firm, but they never thought of pushing them to pursue it as a profession.

Maycee broke the news about how much she wishes to be a UFC fighter to her parents when she was just 13 or 14.

They could not respond with grace as they never wanted to see their little daughter receiving punches and kicks.

They introduced MMA to their children for self-defense. Nonetheless, they supported her wholeheartedly after discovering that their daughter’s happiness lies in those punches and kicks.

Maycee’s Family | They made it a family affair.

The family concluded that Maycee had to receive the best of the training because the better she gets, the fewer punches she will receive.

Maycee’s parents took her all over the United States, searching for opportunities and looking for new techniques.

They were so driven with the idea of making Maycee the best that they drove from Fort Collins to Albuquerque, New Mexico, every other week.

Maycee trained with Greg Jackson and Brandon Gibson in New Mexico. They tried their best to tie Maycee’s fate with Matt Hume, who is considered one of the best MMA coaches. Maycee got associated with Team Alpha Male. Her parents made her meet and learn from Ryan Schultz and Matt Pena, Marc Montoya and Izzy Martinez, and who not.

The ‘meeting and learning from everyone in the company’ theory bothered some of the coaches.

However, Bucky Barber didn’t care what an outsider would say. He held with his idea that they have to give their best for their daughter’s wellbeing.

He once said that he would happily close his business and move halfway across the country if that would help his daughter. It is said that no one could raise a girl child better than a feminist father.

Bucky Barber is indeed a father and a feminist at the same time. If it were not for Bucky and Maryanne, Maycee would not have been the champion today.

Maycee and The Family | The Team that landed her to places.

Barber has trained with a lot of coaches. Her father refers to her as Bruce Lee kind of martial artist that requires a little bit from everywhere.

He believes that his girl has practiced enough, and messing with the same coach again and again would block her cognitive ability.

She did two or three reps at a high black belt level. Hence, meeting new people and grabbing their ideas would help her best.

In fact, it was more like learning second-hand from Emma after she adapts from the video.

Then The Transition Happened

Bucky and Maryanne had to shut down their martial arts academy and moved to Milwaukee, Wisconsin. They did so to support Maycee and her younger brother, Wyatt.

The Barber siblings then got their hands into elite coaching. Maycee trained with Marc Montoya at Factory X.

Moreover, the family made a business transition from MMA academy to a coffee shop. They found one on sale online and took it.

Maycee had to be an MMA champion. It was not just for her but the entire Barber family.

You can find the latest fight details and records relating to Barber on the Tapology website.

Barber started fighting professionally at the age of 19 after she won one amateur fight. She won that fight in 20 seconds.

She then got associated with the Legacy Fighting Alliance (LFA). Maycee got into 4-0 with three stoppages. UFC then provided her the opportunity to compete on Dana White’s Contender Series.

In the series, Dana White, the current UFC president, scouts talented mixed martial artists who could be seen in the UFC.

Maycee fought against Jamie Colleen on July 17, 2018, on Dana White’s Contender Series. She received a UFC contract after earning a stoppage in the third round of the feud.

Barber had her debut fight with UFC on November 10, 2018, on UFC Fight Night: Korean Zombie vs. Rodríguez against Hannah Cifers.

She had the triumph in the fight via technical knockout (TKO) in round two.

She then fought against JJ Aldrich at UFC Fight Night: Thompson vs. Pettis on March 23, 2019. Barber had the victory again via technical knockout in round two.

Similarly, she faced Gillian Robertson on October 18, 2019, at UFC on ESPN 6. She again had the victory in the fight via technical knockout in round one.

She then fought against Roxanne Modafferi on January 18, 2020, at UFC 246. Unfortunately, this time Barber lost the fight by unanimous decision. She suffered her first-ever professional defeat in this fight.

Maycee Barber had to take a break for almost a year owing to knee injuries. She finally recovered after a year and returned to the octagon again in 2021.

On February 13, 2021, at UFC 258, Barber faced Alexa Grasso. Sadly she lost the fight via unanimous decision. However, her fans and well-wishers are extremely excited to see her back again.

Barber had to withdraw everything because of her injury. It was a complete ACL tear in her left knee.

It was reported that she suffered from the injury in the first round of her fight with Roxanne Modafferi. She was seen stepping awkwardly on Modafferi’s foot.

The injury was expected to sideline Barber for nine months. But it ended up disabling her for 11 months. 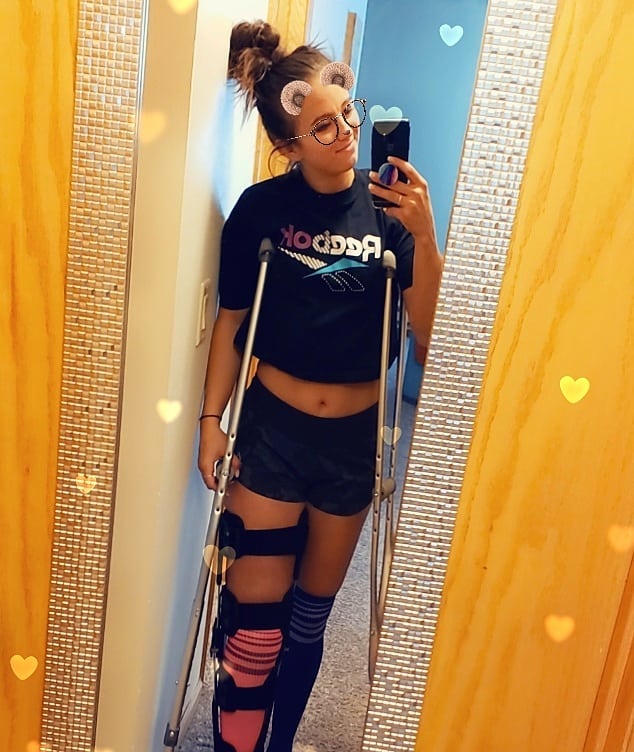 Maycee Barber during her knee injury.

The delay might have been elevated because of the Covid-19 outbreak as well. She must have injured herself in the first 10 seconds, according to her father.

However, she managed to resume fighting. A ringside physician for the Nevada State Athletic Commission examined her knee between the second and third rounds of the bout.

He said that it was a small, partial ACL tear. But the consequence turned out to be severely adverse.

You can find the latest breaking news and highlights relating to Barber on the Sherdog website.

Barber has just begun her MMA career. A lot of opportunities followed by money is waiting for her. She has a long way to go indeed. As of 2022

MAYCEE BARBER’S NET WORTH IS ESTIMATED TO BE AROUND $500 K.

Barber lives a decent life in her 20S with a self-earned income.

Maycee Barber is not dating anyone currently. She is a very closely intact person and likes to keep her personal life out of her professional life.

Likewise, there is no news regarding her dating life or any past affairs. She has been a good secrets hider if she has some, as we don’t seem to find it at all.

Neither is Barber involved in any of the controversies or rumors. It seems like she wants to entirely focus on her career instead of being in a romantic relationship.

Her thoughts and time are mostly occupied with her training, matches, practices, and other basic stuff. However, we do hope she finds someone special to spend her time with.

As age goes by, indeed, Barber will surely have someone by her side. Well, if there will be information regarding her love life in the future, we will surely update you guys about it.

Barber is pretty active on her social media handles. You can follow her via these links:

How good is Maycee Barber?

Maycee Barber is a fabulous fighter for someone of her age. She aspires to become the youngest champion in UFC history.

Light heavyweight champion Jon Jones currently holds the title. He won the belt when he was 23.

She has been practicing MMA for over a decade now. This girl has some extraordinary determination to succeed. She would undoubtedly make her parents proud.

When did Maycee Barber tear her ACL?

Maycee Barber suffered a complete ACL tear in her left knee during the first round of a decision loss to Roxanne Modafferi at UFC 246.

She even underwent knee surgery to repair the damage. It was Maycee’s last fight for the 2020 season. However, she recovered well and returned to action in the 2021 season.

How much is a Maycee Barber UFC 258 fight purse?

What weight class is Maycee Barber?

Maycee Barber is in Flyweight class.

What was the entrance song during Maycee Barber Vs. Alexa Grasso at UFC 258?

The entrance song played during Maycee Barber Vs. Alexa Grasso at UFC 258 was “The Champion” by Carrie Underwood feat. Ludacris”.

Ben Askren coached Maycee Barber during her fight at UFC 246 against Roxanne Modafferi. For those who don’t know, Ben Askren is an American professional mixed martial artist and amateur wrestler.

He was the former Bellator and One Welterweight Champion. Likewise, he has also represented the USA at the 2008 Beijing Olympic games and was also a two-time NCAA champion.