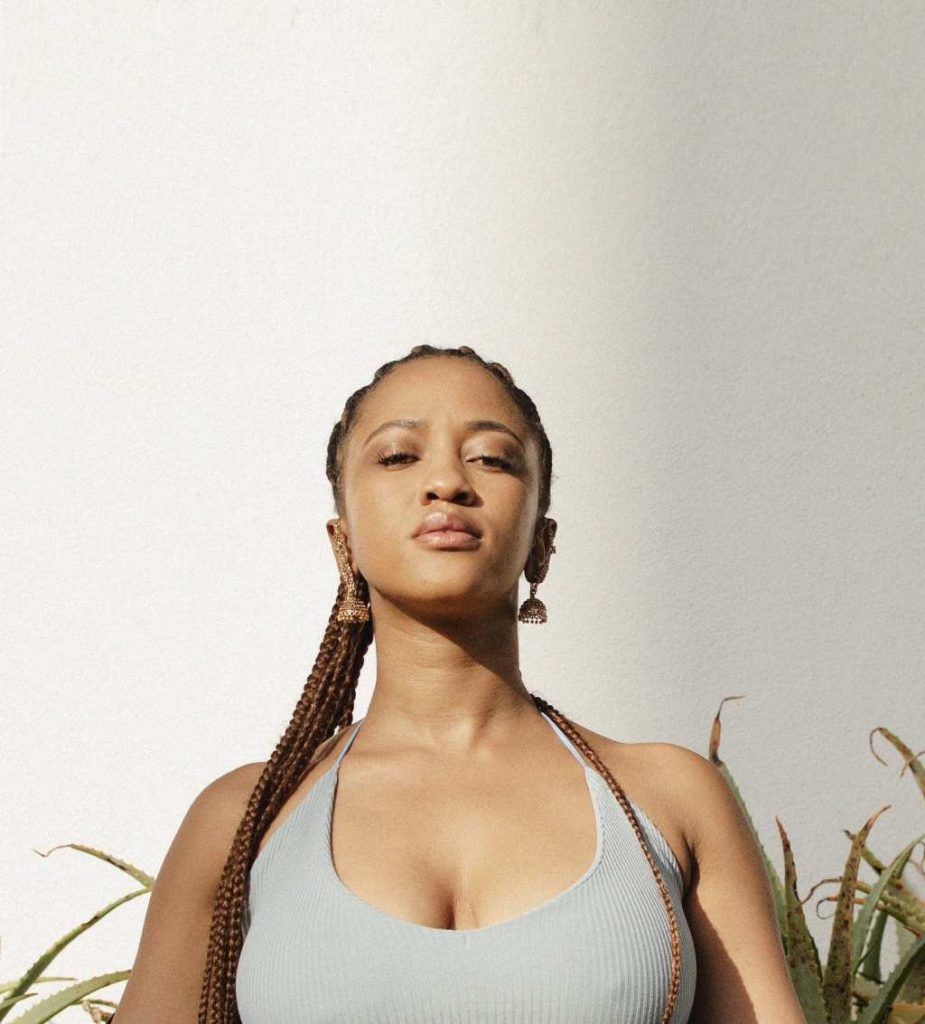 Mpho Sebina (born 18 July 1989) is a Botswana singer and songwriter known for her songs like “Too Late For Mama”, “Dikeledi”, “Piano City”, No Evil”, and “Tjuele” among others.

Mpho Sebina was born on the 18th of July 1989 in the small village of Mochudi, Botswana. Sebina fuses hip hop, soul, jazz, traditional Setswana music, and folklore into her music. Her family loved music; this in addition to other musicians like Sade, UB40, Boom Shaka , Brenda Fassie and Mariah Carey, influenced her music. She is one of 6 children of her parents. Her mother is an accountant and her father happens to be a lawyer with the Botswana Defence Force(BDF).

Before pursuing music, Mpho Sebina studied and graduated with an honors degree in International Business from the Multimedia University of Malaysia. It was during those years that she started exploring the realms of writing, recording and vocal training.

It was in Malaysia where her debut single “Loves Light” was written, inspired by the song Tselane by the BLK JKS. Her 6-track EP title NEO is available on iTunes, which boasts a fusion of soul, RnB, African rhythms and nostalgic throwbacks. The first single “Black Butterfly” is on youtube, as a song about freedom and self-discovery the video represents those elements with scenic outdoor shots and a fluttering ballerina. Upon the start of her musical career, she frequently does corporate functions as well as music festivals where she has shared the stage with the likes of Shekinah, HHP, Freshly Ground, Nnunu Ramogotsi, Shanti Lo, Lady Smith Black Mambazo and Louis Mhalanga just to name a few. In 2016 she brought Naked Soul Sessions to life, a live music event which features different local artists. The event runs in Botswana and South Africa and hopes to spread across the continent.

While in the university, in Malaysia, she released her debut, Love Light. She graduated with a degree in International Business from the Multimedia University of Malaysia.

In August of 2019, she was selected for a music scholarship program in Berlin via the Goethe Institut of German and Pop-Kultur Festival. She was 1 of 10 candidates chosen from around the globe and gained “Goethe Talents Alumni” status.

Describing her music, she said; “In my own words, I do describe it as soul. Someone once deemed it ethereal soul and I’ve decided to run with that name.”

In an interview with Koladpina, this what she has to say;

On what led and motivated her to do music

“I’ve always loved music. It started with the love for it, then just enjoying singing and discovering that I can actually sing. Then it went to writing, and at some point, I was recording. I also have a honours degree in International Business so I was working and I went to university but I was always doing music on the side. There came a point where I was working at an advertising agency called Voodoo. I was there for about two years and at some point I was like “I like my job, I learned a lot from it but it’s not something that I love”. At that point I wasn’t married, no children, living with my parents with no real financial obligations, so I thought “let me see what would happen if I invested all of my time and my energy into doing something that I love”. I quit my job, I think that was about 2014/15. I was curious, what would happen if I just decided to explore my artistic self fully.”

“I had a friend who owned a  studio in Melaka, Malaysia. I used to go there and record covers of songs. My first time in the booth, I covered Eurythmics. That was the first thing that I ever remember doing a cover of. That’s a very fun memory of that time. And I remember also singing at a high school prom. I don’t know how I ended up in an high school in Malaysia but I was there singing Taylor Swift. I remember forgetting my lyrics on stage, that was fun (laughs).

At that time also in my spiritual journey, I’d just found christianity and I remember singing a lot in church. I don’t really go to church anymore but I remember exploring that side of music as well when I was in Malaysia.”

“I want to create a place of joy, healing, and peace. Celebrating Africa and our africanness  and at the same time embracing our femininity and masculinity.”

On Botswana artists not having a platform to express their music

“It is slowly changing. Now we do have a lot of conversations surroundings the art scene, about why we have to source other artists. We’re very close to South Africa and the music scene there it’s way more advanced and bigger, so we end up using a lot of South African artists as opposed to Botswana artists. I do see that changes a lot. I do see a lot more artists speaking up about it and just saying “let’s just headline our own shows”.”

On what she learned through her music journey

“I’ve learnt a lot about myself. How to be patient with myself, my work and people around me. I’ve learnt to celebrate and express myself best within my Setswana culture, being through melodies, stories and the Setswana language. All in all my musical journey  has driven me to “learn to love myself unconditionally”. Just like India.Arie said.”(laughs)

“I want to create a place of joy, healing, and peace. Celebrating Africa and our africanness  and at the same time embracing our femininity and masculinity.”

“It all sounds so cheesy but that’s the truth (laughs) : stay focused, because I feel like we all have that vision and we kind of know what we want at the end, but then during that journey there’s always so many obstacles that say you can’t do it. It’s tough, sometimes there’s no money and sometimes you’re not getting as many streams as you thought you would, but just stay focused and keep going.

Try to diversify your income streams, because what we are mostly passionate about usually isn’t giving you the reward that you deserve at that particular time. So it’s always good to just diversify.

“There was time I was like “Where am I gonna get money from?”, “How am I gonna pay these bills?”, “Am I gonna stay with my parents forever?”. There was a lot of obstacles and lot of crying myself to sleep at night and I can tell you that those nights get fewer and fewer. It does get better. You become stronger. The dream does flourish and become exactly what you have envisioned.”