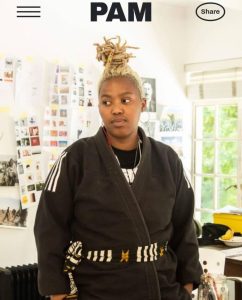 Asanda Lusaseni Mvana (born 1988) popularly known by her stage name as Msaki, is a South African composer, singer and songwriter. Born and grew up in East London, during her childhood she was involved in musical activities. Her career in music began in 2008, at the age of 20, when she was a member of alternative rock band while attending at college.

Her debut Extended Play Nal’ithemba (2013) and debut solo studio album Zaneliza: How The Water Moves (2016), which was nominated for Best Adult Contemporary Album.
In early November 2021, she made her screen debut as guest judge on Idols South Africa season 17.

Asanda Lusaseni Mvana was born in East London, Eastern Cape in 1988. Her father was a DJ and grandmother was a music composer. She attended Nelson Mandela University and dropped out after one year. Mvana attended Rhodes University and obtained Master of Fine Arts degree.
In 2008, she Joined The Patience alternative rock group based in East London and electro-experimental band Johnny Cradle based in Cape town. Following year in 2009, she was guitarist and lead vocalist for Kate and I duo formed in Grahamstown.
In 2012, Msaki attended music school in North Carolina in the USA.

She established her own record label One Shushu Day Artistry and release her debut Extended Play Nal’ithemba, in 2013 produced by Cobus Van Dyk. In 2016, she won ovation at 7th Standard Bank Ovation Awards and Gold Award First Place at Cape Town Fringe. Her single “Imfama Ziyabona” released in 2016, debuted on Metro FM Charts for 19 consecutive weeks. In June 2017, her debut album Zaneliza: How The Water Moves was released in South Africa. The album was co-produced by Nduduzo Makhathini. To further promote her album she peformed at National Art Festival. At the 23rd ceremony of South African Music Awards Zaneliza: How The Water Moves was nominated for Best Adult Contemporary Album. In November 2019, her single “Pearls To Swine” featuring TRESOR and Kid X was released, bagged nomination for Best Produced Video.
In October 22, Msaki released double single of “Fetch Your Life II” and “Mntakababa” featuring Kabza De Small and Focalistic. In November 19, her double project Platinumb Heart Beating and Platinumb Heart Open, was released.

Msaki is currently not yet married as of 2021. We don’t have much information if the musician is in any relationship for now.