Nicky Lopez is an American professional baseball player. He currently plays for the Kansa City Royals of the Major League Baseball (MLB). MLB is a widely known premium baseball league based in the United States.

The second baseman always knew that he would do something in sports. Growing up with a softball in hand, the desire to score big hiked with every other year.

The three-year-old Lopez aspiring to become a baseball player would have been delighted to know he is actually going to be one. Today, we will be talking about Nicky Lopez without excluding anything significant that has ever happened in his personal and professional life. Let’s get started!

Nicky Lopez was born on March 13, 199, in Naperville, Illinois, United States. He was born to proud parents Bob Lopez and Angela Lopez.

He has two older brothers: Bobby Lopez and Anthony Lopez.

Nicky started playing baseball when he was three. He and his older brothers grew up playing together.

Nicky calls himself the smartest kid growing up. He used to skip coach pitch and go right into kid pitch.

He calls himself a two-sport athlete. He always went for the other sport in the offseason. However, he always knew that baseball was going to be his long-lasting thing.

The Father and Son Thing

Bob is a softball player. He played second base, like Nicky in baseball. He was also a semi-professional football player. Softball is similar to baseball, with larger balls in the field. Here, the ball gets softer and softer as it is played. Bob played 16-inch softball. He started playing at the age of sixteen with his brother’s team in La Grange, Illinois.

He was a fantastic player with several awards and titles. Bob contributed to leading his team to ASA titles in 2000 and 2002. He also drove them to the No Glove Nationals in 2002.

Similarly, he won the batting title in the 1998 Mount Prospect Nationals. He then earned two home run titles in 1998 and 1992.

He became co-Most Valued Player with Frank Mustari at Forest Park in 1993. Similarly, he became solo-MVP at the 1998 Nationals.

Bob Lopez is also in the Hall of Fame Chicago.

His father must have passed Nicky’s grace in the field and his determination to give his best. A great athlete gave birth to a great athlete in the making.

Nicky remembers being fascinated by a softball in childhood. He used to follow his father, Bob, around and sit on the bench watching them play.

He recalls willing to go and get the bat. His father used to put his hamstring guard, which used to be taller than Nicky then, by the bench.

He grew up on a baseball field. He believes that his constant visit to the baseball field must have subconsciously planted the love for baseball in him.

Baseball reminds Nicky of his father. It was a medium to establish a father-son connection.

Get to know Nicky, the other side of Lopez.

Lopez believes in giving back to the community. He is often seen making small efforts to play his role.

He donated 450 Pizzas to healthcare workers at KU Medical Center in May 2020. Lopez spoke about his will to do something for the people working hard in the current Covid-19 scenario.

He chose the route because health workers are currently at very high risk. Lopez finds happiness in such small gestures, whether it’s about surprising the health workers or making a kid’s day on his birthday.

Lopez went to Naperville Central High School in Naperville, Illinois. He became the first player from Naperville to have reached MLB in June 2016. The high school must be proud of their boy.

He remembers telling his former coach Stock about how he dreams of putting his big league uniform in the hallways of Naperville Central. Lopez is happy that he would hopefully be able to do that someday.

He then went to Creighton University in Omaha, Nebraska. He played for the Creighton Bluejays baseball team.

Lopez hit .339 after 17 games in junior year at college. He led the Creighton Bluejays baseball team with a .500 slugging percentage and a .453 on-base percentage.

Similarly, he recorded 11 runs and 8 extra-base hits. He had hit .246 in the previous season.

Lopez remembers willing to play that perfect game, which his coaches always talked about. He had a pretty good baseball career in college.

The Kansas City Royals of MLB drafted Lopez in the fifth round of the 2016 Major League Baseball draft.

Similarly, he played for the Wilmington Blue Rocks and the Northwest Arkansas Naturals in 2017.

The Kansas City Royals then assigned Lopez to the Surprise Saguaros of the Arizona Fall League.

2019 IS A YEAR I WILL REMEMBER FOR THE REST OF MY LIFE. A CHILDHOOD DREAM BECAME A REALITY! GOT SOME WORK TO DO, BUT READY TO BE BACK WITH THE SQUAD IN 2020!! LETS GO ROYALS! #ALWAYSROYAL PIC.TWITTER.COM/SKJC2YEXSD 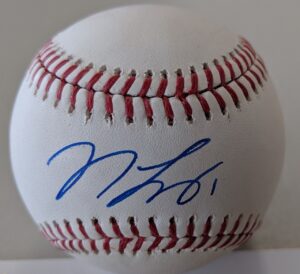 He started the 2019 season back with Omaha Storm Chasers. His contract was finally selected on May 14. He was then called up to play in the major leagues for the first time.

LOPEZ MADE HIS MAJOR LEAGUE DEBUT ON THE NIGHT OF MAY 14, 2019, AGAINST THE TEXAS RANGERS.

He batted .201 with one home run and 13 RBIs in 56 games in his 2020 season with the Kansas City Royals. He recorded the lowest slugging percentage of all qualified hitters in the American League, at .266.

Lopez has earned good money from his MLB career. He has just begun and has a lot more to achieve.

NICKY LOPEZ’S NET WORTH IS ESTIMATED TO BE AROUND $1 MILLION.

He lives a decent life with self-earned money in his 20s.

Lopez is in a relationship with Sydney Lamberty. The couple looks ravishing together. Nicky Lopez is very active on his social media handles. You can follow him via these links:

No, Nicky Lopez is not married yet. He is in a relationship with Sydney Lamberty. The couple might tie the knot soon.

He suffered from a shin injury in mid-2020. He had to leave the field early. Lopez had just registered 0-for-2 with six runners left on base by then.

5/14/2019
I WILL NEVER FORGET THE DAY MY DREAM CAME TRUE! THANK YOU SO MUCH FOR EVERYONE WHO REACHED OUT TO ME. BLESSED TO BE A KANSAS CITY ROYAL! PIC.TWITTER.COM/ZKKWUYXO6U

How much did the Kansas City Royals sign Nicky Lopez for?

They first assigned him to their Appalachian League affiliate Burlington Royals.

What is the Jersey Number of Nicky Lopez?

Who was Adalberto Mondesi Replaced with?

Mondesi was replaced by Nicky Lopez after Mondesi was placed on a 10-day Injured List with a right oblique strain.