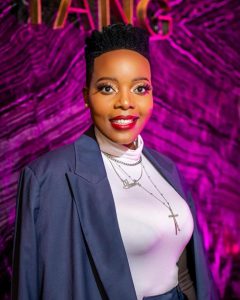 Nomcebo Nothule Zikode (born 28 October 1997), also known as Nomcebo Zikode, is a South African singer and songwriter. Born in Hammarsdale, Zikode was a backing singer for several years. She has collaborated with DJ Ganyani on their hit single “Emazulwini” (2018).

Having signed a record deal with Open Mic Production, she co-wrote and was featured on Master KG’s chart-topping single “Jerusalema” (2019), which debuted #1 on Billboard Music charts and Apple Music charts .

Zikode was born in Hammarsdale, KwaZulu-Natal.

After moving from home to pursue a career in music, she worked mostly as a backing singer for more than fifteen years. She worked with South African artistes, including Deborah Fraser, Zahara, Lundi Tyamara, and Nhlanhla Nciza.

She was signed by Ganyani Entertainment, providing vocals for songs including “NTO”, “Jabulile”, and “Emazulwini”, which received a nomination for Record of the Year at the SAMA awards. As she did not own the songs, she was not permitted to perform them without the consent of the label.

Having signed record deal with Open Mic Productions, she gained worldwide popularity after working with Master KG on his 2019 hit single “Jerusalema” and later remixed by Burna Boy, debuted #1 on Billboard Music charts.

On August 14, 2020, her single “Xola Moya Wam” featuring Master KG was released as album’s lead single. The song was certified gold certification by Recording Industry of South Africa in the first 2 weeks, later reached platinum after a month of its release with sales of 150 000 copies. The single peaked number 1 on Apple Music Chart & iTunes Chart. In early August, album pre-order were made available. On August 21, 2020, her debut studio album Xola Moya Wam was released and received critical acclaim. The album features Master KG, Makhadzi and Bongo Beats.

In 2020, Zikode signed a global record deal with Sony/ATV Music.

On July 29, 2021, she will embark on European tour. In late 2021, she will made his debut on screens as guest appearance on Love and Hip Hop franchise.

On November 2019, she was featured on “Jerusalem” single by Master KG and went viral in early 2020, Burna Boy released a remix. On July 11, 2021, Nomcebo revealed that she wasn’t paid for her feature on the song by her label Open Mic Productions.

Personal life. Zikode is married to Selwyn Fraser and has two children.