Pele, the legendary Brazilian footballer, has a stunning net worth of $115 million. However, it is not surprising to see such a sum labeled to him. All this money came from being the best at what he does, that is, play football. Lauded as the greatest Brazilian to ever grace the pitch and one of his time’s best players, Pele was the highest-earning athlete of his time.

People were more than eager to splash some cash to watch this icon display his magic on the field.

At that point in time, contrarily, earning a lot of money basically from football alone was arduous.

Football remains the top sport that has a hundred times more viewers than any other, game but the relentless effort and sheer will to be the best has made Pele who he is today.

Pele Net Worth | Insight to A Legendary Life

Previously known as Edson Arantes do Nascimento hailing from the municipality of Tres Coracoes, Minas Gerais, Brazil, Pele was born on 23 October 1940.

He is the son of Dondinho, a Fluminese-based footballer, and Celeste Arantes. Likewise, Dondinho and Celeste named their son after the great inventor, Thomas Edison.

As the years went by, Edson’s friends nicknamed him Pele after the Vasco da Gama goalkeeper, Bile. Although the names don’t match, it was initially a way of teasing Edson as a result of mispronunciation. 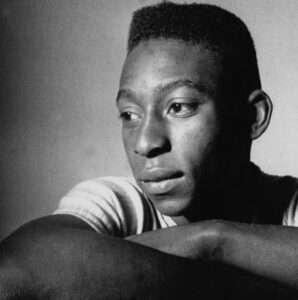 Moreover, Pele, as a kid, lived in destitution near Bauru, located in Sao Paulo. To earn a living, he would work as a servant. Also, Pele first came to admire football through his father.

Unable to collect money to buy a proper ball, he would wrap socks and newspaper and tied them with a string.

With an innate passion, Pele first joined amateur sides like  Sete de Setembro, Canto do Rio, São Paulinho, and Amériquinha. Notwithstanding these stints, the Brazilian honed his skills at indoor games.

Historically speaking, nobody can manage to rule over the throne that Pele sits on. Only Lionel Messi and Cristiano Ronaldo are closer to challenging the Brazilian milestone with a seemingly unbreakable record.

Another milestone he set is scoring the most football goals for a single club, Santos FC. The icon played for two decades at Santos FC throughout his career, and upon nearing his retirement, he moved to New York Cosmos and played for three full seasons.

With a highlight of a 37-year long career, Pele amassed a $15 million sum. Declared as a national treasure by then Brazilian President only aided to boost his reputation and significantly bump his paycheck.

While this may be true, the actual salary Santos FC paid Pele is not available to the public. Likewise, when the Brazilian national treasure started playing for New York Cosmos, he pocketed almost $6 million by the end of his contract.

Added to that, Pele earned nearly $14 million through endorsement deals. 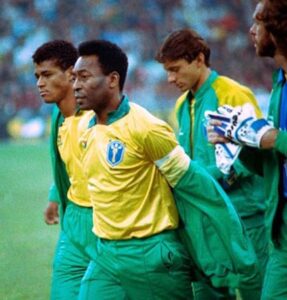 The amount he earned during his playing career might seem pale on present-age footballing contracts and wages, but let us remind you he was the highest-paid athlete accounting for every sport.

Even at the age of 79, the legendary player still earns more than what we make in a whole year. In total, Pele accumulated $15 million from football alone.

Pele wore jersey number 10 for the Brazilian national team and also few other clubs. Since the legend of football wore the number, number 10 is considered important in Brazil and in other places as well.

Neymar and Ronaldinho also inherited the same number. Here’s a picture of the legendary man wearing his number 10 jersey:

Here are a few records set by Pele that stands still today:

Upon concluding his football career, Pele’s primary source of income was endorsement deals.

On the other hand, UNESCO appointed the Brazilian as its Goodwill Ambassador in 1994. Due to inspirational status, Brazilian President Fernando Henrique Cardoso announced Pele as Extraordinary Minister for Sport.

After a short duration of his ascension to the post, the football legend proposed a law to uproot corruption in football, now dubbed as the Pele Law.

When Pele was accused of laundering money from UNICEF, he chose to resign from the post.

Thereafter, the retired Santos legend founded a television company that acquired the rights to broadcast matches and other international contests. The current status of the company isn’t talked about in the media these days.

In his retirement life, the legendary footballer had the chance to reflect upon his life’s achievements, lowest points, and his family. As a result, Pele published several autobiographies.

A celebrity in and out of the football world, his books were highly appreciated and became best-sellers in his native Brazil and several other countries. In the same way, Pele officially became an actor in 1969 with the television series Os Estranhos.

Not limited to this, the Brazilian would return to the cinematic world with a few other documentaries and movies.

He appeared alongside Sylvester Stallone, Michael Caine, and other 60s-70s era players in a telenovela called Os Estranhos and similarly in a cameo role in Pele: Birth of a Legend.

Despite retirement and an aging body, Pele’s popularity isn’t subsiding anytime soon. It is because he holds a commanding position, is a natural social worker, and occasionally travels as a guest of honor for various events.

Often called The King, the iconic retired star has a slew of financial assets and other properties bought during/after his rise to fame. It is safe to say that the Brazilian owns a variety of cars, estates and lives an exquisite life.

Reportedly in January of 2018, the Brazilian purchased a house that has a value of $4 million.

The house is complete with a swimming pool, jacuzzi, sauna, a home office, a sports room, and a parking lot. With the sound of that, it must be quite lavish.

The compound is estimated to be laid out on a large acre of land. Similarly, the legend also purchased a sweet retreat at 156 Waterhole Road, near East End Waterfront, for a cheap $156k.

At present, the Hamptons retreat has a value of around $2.5 million. The house is spread on 3400 square foot land.

It is another extravagant property that Pele owns, which includes a pool, an outdoor shower, and a deeded access to a nearby beach.

In like manner, the property comprises a spacious, modern kitchen and an entertainment deck with a living room double the standard size. Finally, the Brazilian-born owns a beautiful collection of cars.

These range from Maserati, Jeep, Mercedes, and Fiat. Currently, the star maintains a low profile while roaming about and hence drives a modest Fiat 500.

Along with these, he highly treasures the cars he drove in his youth and proudly keeps them in his vintage collections.

Here’s a picture of Pele’s autograph:

Pele – people who do not understand football have also heard this name. It is understood as synonymous with the word football. Pele, the legendary footballer, is, in fact, considered the brand ambassador of football worldwide.

The Brazilian government considers him a national hero and a national treasure. When the Nigerian Civil War happened during the 1960s and 1970s, it was announced that Brazil’s Santos F.C. would visit Lagos to demonstrate a few exhibition matches.

Pele played in the Santos F.C. then. The Nigerian authority then called for a two-day agreement so that the country would watch Pele play.

Since his ‘football wizardry paused the riots, Pele is also known as the man who stopped the war.

He built a world of redefined football where footballers were cherished even more. He also became the first athlete to have gotten featured on the front of a video game.

A plaque was putten in the stadium to celebrate the goal scored by the legendary footballer in Rio de Janeiro, Brazil, at the Maracana stadium.

The plaque reads, “On this pitch on 5/3/1961, Pele scored the finest goal in the history of the Maracana”.

Utter the word ‘football,’ one in every five people will think of Pele in their subconscious and vice-versa.

Pele is considered to be a role model for thousands of people worldwide, not just for what he did inside the field but also for the great personality that he is.

The football legend scored the best when his health was at its best. With age, it’s inevitable for the human body to suffer from various diseases.

In February 2020, Pele’s son announced that the legendary football player is suffering from a kind of depression and barely leaves home. However, Pele dismisses his son’s claim of depression.

He is of the belief that he is fine with aging and has accepted it as a beautiful phenomenon.

His health problems are increasing, disabling him from walking fluently. The man that was known for his running and kicking now has problems with mobility.

He has already begun the journey of fragile 80s. We hope he gets habitual with the differences one has to face with increasing age. May the legendary footballer age gracefully.

Pele now needs either a wheelchair or a walking frame to move at a distance. It is absolutely normal for a person in their 80s to have such requirements.

Other than that, the football legend is still determined, curious, and full of life.

Pele is super-rich. He has a net worth of around $115 million.

How old is Pele?