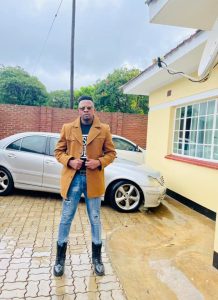 Evans Zangazanga (born 9 June 1986) popularly known by his stage name as Piksy is an award-winning Malawi singer and songwriter and one of Malawi’s celebrated and popular Musicians.

Born on 9 June 1986 and also branded Chinfana Chodziwika ndi Boma (CCNB) by his fans, started his career in the year 2004 while still at School and made his mark in 2008 with a popular hit Pantima (Sendeza) which he did with his friend Nthumwi Nicodemus. The duo was popularly known as ATUMWI. The Atumwi album also had hit songs like Pamudzi, Zatheka, Moseliwa, Chipwirikiti and Mzanga. A few years later Piksy started performing on his own and formed the Langwan Movement Band and has so far two albums and over 50 songs to his name. He released his solo debut album ‘Maso’ on 08 September, 2012 which has songs like Uncle Short One, Unamata, Appetiser, Ponya Mwendo, Maso and many more. Since then, he has shared the stage with popular personalities in the music industry like P Square, Kanda Bongoman, 2 face, Freshly Grounds, KCee and Liquideep. He so far has maintained his ever growing fan base and his art and creativity in his lyrical content cannot be ignored and is the only reason his album of 2012 remain in the musical circles. This is also evident by the fact that he performs at Malawiï¿½s major Musical and Arts festivals i.e Lake of Stars, Sand Music Festival and Likoma Festval. After releasing quite a good number of singles, Piksy released his second album ï¿½Mthunziï¿½ in July 2015 which has songs like Mthunzi, Tsoka Liyenda, Tifase, Mwezi Uwale, Maloto, Moto and many more. In November 2015 Piksy was nominated for Best Male Southern Africa category. (KORA AWARDS) The reception for these songs has been amazing as they are all enjoying massive airplay and downloads beside ï¿½Tsoka Liyendaï¿½ far breaking the record of highest downloads on www.malawi-music.com. Piksy respects and value the Malawian culture such that his music is always targeted at all people regardless of age or any demographical differences. This fact attracted Airtel Malawiï¿½s attention and made him their Brand Ambassador for a 2 year long contact which commenced on 1st August 2012 through 30 November 2015. With over 33,000, 33,500, 10,200 and 10,600 fans to his Facebook page, personal Facebook, twitter account and Instagram accounts respectively, Piksy is one of the top Musicians in Malawi and indeed this part of the continent. Piksy has also performed in other countries like United Kingdom, South Africa, Mozambique and once recorded in Kenya. He is also the main artist being hired by PSI Malawi, Health Policy Project with USAID, National Youth Council, UNFPA and YONECO Malawi to support them during advocacy programs and to also compose and produce theme songs.

We don’t have much information about Piksy’s wife, family, and personal life.