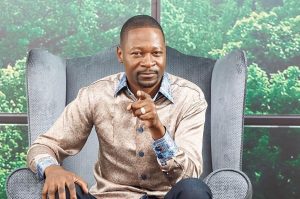 Emmanuel Makandiwa was born Shingirai Chirume on 25 December 1977 to Lilian Makandiwa. His family eked a living through farming. He grew up in Muzarabani. Both his parents were elders in the Apostolic Faith Mission in Zimbabwe Church in Muzarabani. He attended Zengeza High School in Chitungwiza for his secondary education. After completing his secondary education, he returned to Muzarabani. He is married to Ruth Makandiwa. He has two sons, Emmanuel and Victor.

He was a pastor in the Apostolic Faith Mission in Zimbabwe (AFM) Church. Makandiwa has been in the media limelight with his controversial miracles ranging from manhood enlargement to changing people’s HIV statuses as well as causing the birth of a baby three-day-old pregnancy. Makandiwa was sued for “fake prophesies” in November 2017.

Having been born in a Christian family, Makandiwa used to be part of the team which organized gospel crusades and was one of the preachers. He came back to Harare and was enrolled at the A.F.M’s Living Waters Theological Seminary where he graduated with a Diploma in Theology in 2002. Makandiwa claimed that before he graduated he was called in a vision by God in 1995.

After graduating, Makandiwa went to Matabeleland where he worked as an assistant pastor under the supervision of Reverend Aspher Madziyire (who was once the President of AFM). He was then assigned to be the pastor of an Assembly in Shangani. In 2004, he was transferred to How Mine and subsequently to Hebron Assembly in Chitungwiza. In August 2008, Makandiwa started an inter-denominational church drawing the attention of many people. His sermons were screened on Zimbabwe Broadcasting Corporation television.

It was reported that Makandiwa devoted much of his time to his newly formed inter-denominational church neglecting his duties at his Chitungwiza assembly. Those in the executive interim of AFM gave Makandiwa two options; either to remain with AFM or to be with UFIC. He chose the latter. In 2010, Makandiwa renamed UFIC to United Family International Church (UFIC) in 2010.

In 2012, Makandiwa’s was implicated in a corruption scandal for illegally purchasing two stands in Chitungwiza working in cohorts with Jemina Gumbo who was the director of a certain housing scheme. It was reported that the Council had approved the construction of a stadium and hotel on those two stands that were allocated to Makandiwa.

In February 2014 and group of pastors from Ghana accused Makandiwa of using charms to perform his dubious and controversial miracles. These pastors also stated that they were intending to report him to Mugabe so his church could be banned. Leo Mugabe also allegedly supported these prophets arguing that Makandiwa failed to heal his mother, Bridget Mugabe who spent about 4 years in a comma. In the wake of this, some people began to question the authenticity of Makandiwa’s healing powers as well as the power of those self-proclaimed prophets who emerged in the country around 2012. Another South African prophet claimed that Makandiwa and Uebert Angel received ritual charms from their spiritual father Prophet Victor Kusi Boateng who hails from Ghana. The prophet also made the headlines when he was said to have threatened to walk on Kariba waters to prove his critics wrong.

Apart from being a “Prophet”, Makandiwa is also a businessman. In the last quarter of 2014, it was rumored that Makandiwa purchased a gold mine from a Chinese firm, Ming-Chang for US $1,3 million which he was given by a certain local bank. A consortium company trading under the name Havilah Gold is also believed to belong to Makandiwa as it is run by a group of directors who are all members of Makandiwa’s church. Makandiwa uses the Sterkinekor’s franchise locally and in Zambia.

On 3 June 2016, Makandiwa launched Brand Makandiwa at a colorful event held in Harare. In attendance were his spiritual father Victor Boateng, his biological parents, foreign delegates and local business executives. According to the brand managers led by Randy Bediako of Ghana, Brand Makandiwa seeks to celebrate Makandiwa’s achievement through various products that will be released on the market, such as books and branded wares, among others.

Makandiwa built a house for Chief Kasekete Changara of Mashonaland Central. It was also reported that Makandiwa contributed immensely to the construction of an orphanage run by Grace Mugabe in Mazowe.