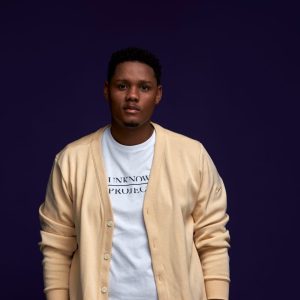 Samkelo Lelethu Mdolomba (born 21 January 1988) popularly known by his stage name as Samthing Soweto, is a South African singer and songwriter. Samthing is best known for his vocals Sun-El Musician’s song “Akanamali” and his number 1 single on spotify “Akulaleki”.

Following his departure of the group The Soil, Mdolomba released his debut album, This N That Without Tempo (2010), which fuses a capella and soul. He then departed from his debut album’s sound as he introduced fusions of Afro pop, amapiano and R&B for his second album, Isphithiphithi (2019), which became certified platinum by the Recording Industry of South Africa RiSA.

Samkelo Lelethu Mdolomba was born and raised in Protea North, Soweto, a township of Johannesburg, South Africa. He is the third of four children, who were all raised by his single mother. Mdolomba was moved to his grandmother in Eastern Cape, but was later moved back to Protea North caused by substandard issues. In an interview with The Best T in The city, he said, “She [his mother] thought maybe an upbringing in the EC would benefit me but it didn’t. I lost weight, not that my granny wasn’t looking after me, I cried every day…it was too much for me so she came back after a year”.

Mdolomba left school in eighth grade as he had problems of dyslexia . In an interview on Metro FM, he stated, “School was really tough for me. It was a nightmare but I went back nonetheless.” At the age of 15, Mdolomba started using Mandrax, and was also involved in crime-related actions in order to escape difficulties he faced at home. He was sent to a youth detention centre for armed robbery where he started making music full-time. This eventually helped him break out of the life of crime and drug addiction.

Prior to meeting members of The Soil, Mdolomba was arrested for public robbery in Avalon cemetery at Klipriviersoog, Soweto. His sentence was suspended and he was sent to a youth detention center in Krugersdorp, West Rand. Mdolomba was encouraged to sing by his fellow inmates, who sang using a prison style of chanting called Gumba Fire, which includes singing Kwaito songs in a cappella format. This became a major influence in him establishing the group The Soil, in terms of both working in a group, and using bare vocals as a musical instrument. He also stated that the male choral group Ladysmith Black Mambazo had an influence on him in venturing to a cappella.

After leaving The Soil, Mdolomba continued with the nu jazz group, The Fridge. The band which consisted of a drummer, Ade Omotade, bassist Muthusi and Mdolomba as the vocalist, gained success in playing on local shows and festivals, including The Loft at Melville, Gauteng. The group released their debut extended play, Bass Drum & Sam in 2011 through digital media. The Fridge disbanded in 2015 due to two members of the trio relocating; Thusi and Ade.

In 2013, Mdolomba appeared on poet Makhafula Vilakazi’s South African poetry album, I Am Not Going Back To The Township, credited both as a guest vocalist and producer. Following his debut studio album, This N That Without Tempo, which was independently released on 6 August 2010, Mdolomba released his debut EP Eb’suku, released on 4 January 2014. In support of Eb’suku, Mdolomba headlined the annual internationally acclaimed Joy of Jazz Festival 2014, representing “Sounds Of Democracy”. He also performed at the Rocking The Daisies Festival held on 2–5 October 2014 at Cape Town, Western Cape. That same year, he composed and performed the title sequence of the drama series Rhythm City, and also appeared on the soundtrack of the drama film Otelo Burning.

On 20 September 2019, his second studio album Isphitiphithi, was released. The album broke the record of the highest number of users “pre-adding” the album on the streaming service, Apple Music South Africa, before the release of the album. The record was previously held by singer Billie Eilish.
“I am surprised and excited, I didn’t know there was another record to be broken, which is a great feat for me. I thank all my fans for being so supportive and loyal.”

Samthing Soweto is currently single and not currently dating or in any relationship for now. Samthing Soweto is also not yet married. However, Samthing Soweto has a daughter which is 5 years old as of 2021.
The song Nodoli, which means doll, is dedicated to his five-year-old daughter. In the song, he tells her about the hardships he went through leading up to her birth. “My daughter is 80% of the reason I have a music career today.

Samthing Soweto’s net worth as of 2021 is estimated to be around $1.5 million – $25 million making him one of the most influential South African musician of his time.