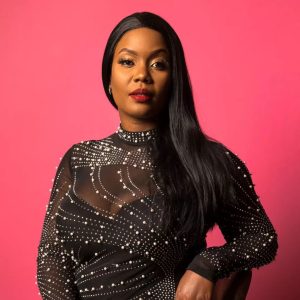 Natasha Sanaipei Tande (born 22 March 1985) popularly known as Sana, is a Kenyan singer, songwriter, actress, karaoke host, radio personality and entertainer known for her sultry voice and Swahili lyricism.
Sanaipei’s musical style is versatile, incorporating elements of R&B, Afropop, Zouk, Reggae, and Neo-Taarab. Her voice is light and sultry with a smooth timbre. She has received sole writing credits for most of her songs and praise for her lyrical style of writing and mastery of Swahili.

Sanaipei has been described as having “undeniable sex appeal”. While her onstage persona is lively and seductive, she tends to keep a low profile and avoid questions about her personal life.

For primary school, Sanaipei attended Loreto Convent Mombasa. Thereafter, she joined Mama Ngina High School and later transferred to Aga Khan High School Mombasa. She describes herself as an excellent swimmer, who remembers sneaking out of school once to attend a swimming gala. When she was 16 years old, Sanaipei’s family relocated to Matasia, Ngong. She completed her high school education at St Lucie Kiriri Girls, Nairobi, where she led the school choir. In 2004, she joined the Kenya Medical Training College to study Pharmacy.
In 2004, at 19 years of age, Sanaipei joined the Coca-Cola Popstars (East Africa) Talent Search after coaxing from her family. After successfully auditioning for the show, she deferred her college studies. She won the competition alongside two fellow contestants, Kevin Waweru and Pam Waithaka. Together, they formed the band Sema and won a record deal with Homeboyz Records. In 2005, the trio released a seventeen track debut album Mwewe, with hit singles Leta Wimbo, Sakalakata, and the eponymous Mwewe, thrusting them into the limelight. Later in the same year, the band split, citing “irreconcilable differences” and “external forces”.
Following the disbandment of Sema, Sanaipei embarked on a solo music career, featuring in Kenyan rapper Jua Cali’s critically acclaimed hit single Kwaheri and collaborations with Madtraxx and Big Pin. Hot on the heels of Kwaheri, she released Najuta. She also ventured into karaoke and radio, joining Capital FM Kenya as a co-presenter on Eve D’Souza’s Hits Not Homework drive show in 2006. She later joined Kiss 100 FM in 2007 to host the mid-morning show. She also hosted Keeping It Kenyan, a weekend segment that featured underground Kenyan music and artists.
Upon her departure from Kiss 100, she joined Easy FM (now known as Nation FM) in 2013, as co-presenter of the drive show alongside Edward Kwach. In 2014, she released her hit single Mfalme wa Mapenzi as part of producer Wawesh’s Mahaba project, a showcase of Swahili love songs. The song achieved widespread critical acclaim for its well-crafted lyrics and tasteful visuals. Later, she began to host the mid-morning show alongside Obinna Ike Igwe. When Obinna was tranfered to the evening show, Sanaipei became the sole host of the mid-morning show and garnered the station’s largest listenership. In September 2015, Sanaipei and fellow presenters Ciru Muriuki and Anto Neo Soul were laid off. Her termination and that of her colleagues was met with much uproar on Twitter, with many listeners and fans demanding their reinstatement.
After leaving Easy FM, Sanaipei turned her focus toward her music career, releasing singles such as Rasta Man, Simama Imara, and Ankula Huu. Her hit single, Amina, broadened her regional appeal and caught the attention of Tanzanian pop star and musician Chege Chigunda, who flew her to Dar es Salaam and featured her in his Najiuliza single alongside Tanzanian singer Ray C.
After a cameo on NTV’s Auntie Boss! and a recurring role on Maisha Magic’s Varshita, both produced by Eve D’Souza’s Moon Beam Productions, Sanaipei landed a starring role as the eponymous character in Rashid Abdalla’s Aziza, a Swahili soap opera set in Mombasa. She continued her music career with a feature in Mombasa crooner Otile Brown’s Chaguo La Moyo, which holds the record of most-watched Kenyan video on YouTube with over 24.5 million views. In 2020, they released their second collaboration, the hit single Aiya

On 5 March 2020, Sanaipei hosted her final karaoke at The Grove on Riverside and hung up her karaoke boots. She went on to release Mdaka Mdakiwa, Kunitema, and her latest single Yako. She also featured in Nadia Mukami’s Wangu single off her African Popstar EP. The music video garnered 4 million views in its first week on YouTube and was dubbed the biggest Kenyan collaboration of the year. Sanaipei currently stars as Nana Tandala on Kina, a Kenyan adaptation of the South African television series The River, which airs on Maisha Magic Plus.

Sanaipei Tande’s net worth as of 2021 is estimated at around $1.5 million – $20 million making her one of the richest female musician in Kenya (net worth estimated in 2021).