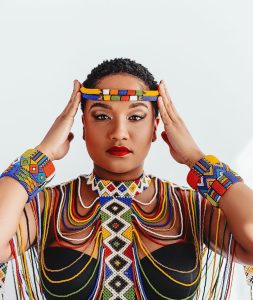 Simphiwe Nhlangulela popularly known by her stage name as Simmy, is a South African-born singer-songwriter.

She gained prominence in 2018, after signed a record deal with EL World Music and release her debut album Tugela Fairy (2018), spawned with hit singles “Ngiyesaba”, “Ubala”, “Umahlalela”. The album was certified gold by the Recording industry of South Africa.

Her second studio album Tugela fairy (Made Of Stars) released in 2020, with chart-topping single “Ngihamba Nawe” on the top 100 airplay charts.

Growing up in Tugela Fairy, she mainly listened to Mbaqanga, country music and Maskandi. Simmy music is generally Afro-house and Neo-Soul but she also incorporates Maskandi and RnB to her other songs. She has cited a number of artists as her inspiration Dolly Parton, Soul Brothers, Letta Mbuli, and Brenda Fassie.

Simphiwe Nhlangulela was born in South Africa, as the youngest of four children. In an interview with Emmanuel Tjiya Sowetan newspaper, Simmy revealed that she was raised by strict parents growing up. She is an alumnus of University of KwaZulu-Natal, where she studied Social Sciences.

“I discovered my voice back in primary school, but didn’t take it seriously because I didn’t think people would be in love with Simmy’s voice. But as time went on, I realised I could do it professionally.”

Simmy started her career by auditioning for SA Idols and SA Has Got Talent but was unsuccessful.

Her professional music career started in 2017 by signing to El World Music after completing her studies which was followed by the release of her debut studio album Tugela Fairy, which was featured in Apple Music artist Spotlight. In February 22, her single “Ubala” was released featuring Sun-El Musician. The song was certified gold. The album was released on October 26, 2018 and was certified gold by the Recording industry of South Africa (RiSA) for South Africa 25 000 sales. Her single “Umahlalela” was certified platinum plaque. At the 25th South African Music Awards, Tugela Fairy was nominated for Best Afro Pop Album.

Simmy announced work on her second studio album prior to the release of Tugela Fairy, with progress on the record continuing throughout 2020. In March 2020, she released a single “Ngihamba Nawe” fused with the classic Afro-House/neo-soul featuring vocals from Sino Msolo. In October 2020, Simmy headlined to Rose Fest. On November 9, 2020, her second studio album Tugela Fairy (Made of Stars) was released. The album features Mthunzi, S-Tone, Da Capo, Sun-El Musician, Sino Msolo, Ami Faku, and Khuzani. Tugela Fairy (Made of Stars) received nomination for Best Afro Pop album at the 27th South African Music Awards.

Simmy is known for keeping her personal life private. We don’t have much information if Simmy is dating or if she is currently in any relationship. Simmy as of 2022 is not yet married.