Tatiana Suarez is a professional American UFC fighter. She is the living example that relates to the saying, ‘Nothing is impossible.’ The fighter would not have reached where she is if she had not hustled hard in her life.

Being a cancer survivor, Tatiana has experienced so many dark days in her life. However, she succeeded in battling the silent killer disease in no time.

The mixed martial artist has set a record of zero losses until now. From being the dog trainer to the renowned UFC wrestler, Tatiana has achieved her dream.

The two-time bronze medalist in the world championships of freestyle wrestling started to wrestle before her fourth birthday. Being devoted to her passion, she has won several titles.

For instance, she has lifted the Gladiator Challenge championship. Also, Tatiana is the strawweight winner of the 23rd season of The Ultimate Fighter reality show.

Want to know more about her life, including net worth and boyfriend? If so, then let’s jump to the article below.

Besides her parents, Tatiana has three siblings, two brothers, Ricky Suarez and Chris Suarez, and a sister Julia Suarez. 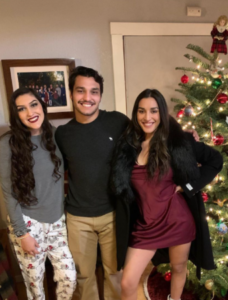 Growing up, Tatiana’s parents moved on different paths when she was at the age of seven. After the separation of her father and mother, Tatiana was raised by her mother single-handedly. So, she is very close to her loving mother to date.

Moving on to Tatiana’s academic history, she attended Northview High School. Later on, the wrestler got enrolled at Lindenwood University. However, she didn’t complete her university as she dropped out after a year.

Tatiana comes from wrestling family. She was smitten by her older brother, Ricky, from a young age. Her brothers were introduced to wrestling by her father. As a result, she set her mind on fighting.

Also, she used to fight against the boys. And she always won those wrestle when she was an early age. It is evident enough to be the reason behind her never giving up attitude.

Born on December 19, 1990, Tatiana is 30 years at the moment. Also, her star sign happens to be Sagittarius.

And from what we know, they are known for being compassionate, empathetic, and honest.

Being a fighter, Tatiana takes good care of her body and does several workouts and exercises to maintain her physique.

Apart from that, Suarez looks gorgeous with her lustrous long brown hair and shining brown eyes.

In 2013, Tatiana began her training for MMA. After a year, in July, she made her professional debut in MMA in the Gladiator Challenge promotion.

On her entry to the ring, she competed against Tyra Parker and won by a unanimous decision.

After that Tatiana returned in April 2015 and defeated Carolina Alvarez in the first round.

Later, she made her final appearance for the promotion in August 2015 by defeating Arline Coban in the second round.

Talking about Tatiana’s journey in the Ultimate Fighting Championship, it seems that she is having one of the thrilling and soul-wrecking competition.

Starting from her debut in UFC, she faced Amanda Cooper on 8th July 2016.

After that, she competed with several fighters including  Juliana Lima, Viviane Pereira, Alexa Grasso, Carla Esparza and Nina Ansaroff. Notably, to date, Tatiana has not lost in a single battle.

Back then, Tatiana was focused on training for the 2012’s Summer Olympics in London. During her training session, she encountered a neck injury.

After the MRI and CT scan, she knew about a bothersome disc in her neck.

Moreover, the fighter was more shocked by another health problem. Tatiana was dealing with the cancerous growth on her thyroid. Soon, she went through radiation therapy.

To stop the spread of cancer all over her neck, the doctor removed her lymph nodes and the thyroid. It was not a comfortable experience for such a young wrestle then.

Though she was recovering well from the successful treatment, she was quarantined for weeks.

Likewise, she was not allowed to meet any of her relatives in such a difficult time. But, she didn’t lose her strength; indeed, she accelerated her skills.

For instance, Tatiana began doing drills, pushups, situps, burpees, jumping jacks, and more on her own inside her four walls.

As a result, the professional fighter recovered being bold and determined. And Tatiana commenced practising Brazilian jiu-jitsu after a lengthy rehab.

Being a professional wrestler by profession, Tatiana makes a hefty amount. Indeed she has piled up millions of net worth.

As per the information obtained from some of the reliable online sources,

Tatiana has a net worth of $ 4 million. Additionally, she has made huge money from the moment she entered the Ultimate Fighting Championship.

Also, many athletic commissions don’t report the fighter’s making in detail. Hence, Tatiana might have acquired more than the estimated amount until now.

Similarly, Tatiana also earns a massive amount as a salary, including bonuses and incentive pay. None of the fighting agencies reveals an accurate salary.

However, the projected salaries of the fighters are available.

Moreover, the professional wrestler lives a lavish lifestyle in her California based home. Also, she has up to date cars.

Not only this, but she also has a chopper. Without a doubt, the young and strongest fighter is happy with her luxurious life.

Talking about Tatiana’s dating life, she is in a relationship with her boyfriend, Christopher Sykes. They have been together for several years. Tatiana’s beau, Christopher, is also an MMA fighter. As they belong to the same profession, sometimes they give tough competition to each other.

Back in June 2019, the couple was banned from training together for a time. Though they might be competitive in their field, they are very caring for each other.

With a successful fighting career, full of media exposure, Tatiana has gained fame and recognition from a wide range of audiences.

Suarez’s social media accounts can indeed affirm her popularity. You can follow her Tatiana Suarez via these links.

Where does Tatiana Suarez train?

What is Tatiana Suarez from?

Tatian Suarez is from Azusa, California, the United States.

Why is Tatiana Suarez not fighting when she will start fighting again?

Tatiana Suarez hasn’t been fighting since June 2019 due to a lingering neck injury.

Likewise, Tatiana mentioned in one of her interviews that she would return back to action after her complete neck recovery.

What weight does Tatiana Suarez fight in?

The fighter, Tatiana, is not married yet. However, she is in a long term relationship with her boyfriend, Christopher Sykes.