Terrence Brooks is a football player who plays in the National Football League. He has played for major NFL teams. Some of them are the Philadelphia Eagles, New York Jets, etc. Brooks is currently a free agent.

Furthermore, Brooks was picked by the Baltimore Ravens in the 2014 NFL Draft. He was the 79th pick in the third round. Currently, he plays for the legendary team New England Patriots.

As per his contract, he will play for the Patriots till March 14, 2021. The footballer serves as a Safety in the NFL. He wears jersey number 25 while playing with the Patriots.

He was quite famous for his incredible football skills since high-school. The footballer gained further recognition in college. Hence, he was an obvious pick in the NFL draft. 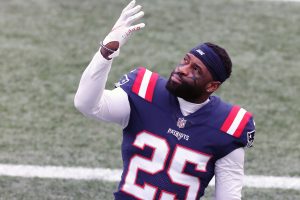 Brook’s grandmother Sarah raised him, so he is very close to her. Moreover, his great grandfather helped increase his interest in football.

While growing up, young Brooks was surrounded by family at all times. Terrence is a family guy even now. Although he is only 28, he is the father of three kids.

The NFL player usually credits his family for his career and success. He claims his family’s blind support and love helped him get through some rough times. Furthermore, he is a firm believer in god and keeps a strong faith in him.

Terrence Brooks was born in Dunnellon, Florida, to DeTanya Brooke and an unnamed father. His father was not around since he was very young.

Hence, his mother and grandmother took care of his needs. As a kid, Brooks was surrounded by strong women who ensured his proper growth. Besides that, he has a brother named Keandre Brooks.

His grandmother, Sarah Brooks, raised him while his mother worked a state job. The NFL player resided with “Nana,” who worked for the Marion County School Board.

Although it wasn’t easy, Sarah looked after the kids and provided them with all their needs. She instilled good morals and values in them. Moreover, she encouraged Terrence to pursue his dreams and achieve his goals in life.

Brooks With His Nana Sarah and Oldest Son Carter

His great grandfather, Samuel, taught him how to play baseball and football. Shortly after, he became quite good at sports, and recruiters barely overlooked.

A youth football coach Dana Moore is a prominent figure in his life. Moore drew Brooks towards football and became a role model for him.

The father of three attended Dunnellon High School. He had an exceptional high-school football career and was quickly noticed.

As a result, many colleges were interested in him. Eventually, he decided on Florida State University to further his education and play collegiate-level football.

Being an athlete, he is very health conscious and takes a balanced diet. Hence, he is very fit. Terrence is 5 feet 11 inches tall and weighs about 205 lb, approximately 93 kg.

Brooks started his journey towards football when he was only nine years old. His great grandfather taught him football and baseball.

He picked up moves and improved his football skills quite early. Shortly after, he was discovered by Crystal Rivers Shark’s coach Dana Moore. After that, he played with the coach to win several championships.

In the entirety of his career at Dunnellon High School, he made many touchdowns and set records. Moreover, in his junior year, he made 53 tackles and six interceptions along with rushing 500 yards.

Besides that, the footballer had an outstanding senior year. ESPN.com named the NFL player a three-star recruit.

Furthermore, he received a scholarship to attend Florida State University. Although he had offers from other notable schools like Mississippi and South Florida, he chose FSU.

The Patriot Safety assisted Florida State Seminoles to many wins. In Showtime’s senior year at Florida State, he made it to the first-team All-ACC selection. CBSSports.com also named him an All-American.

Following his graduation, Baltimore Ravens picked him in the 2014 NFL Draft. He was the 79th pick and was drafted in the third round. Moreover, he signed a four-year contract with the team.

However, Terrence was severely injured the same year. He was placed on the injured list in his rookie year. He played well after recovery.

But the Baltimore team released Showtime on September 3, 2016. Nevertheless, the Philadelphia Eagles took him in.

He had a promising career with the Eagles for a year before they traded him. He was sent off to the New York Jets.

The FSU player worked hard in the team. In less than a month with the Jets, he made two interceptions. Besides that, he defended three passes and led his team to a win against Miami Dolphins.

Moreover, he was the AFC Defensive Player of the Week for his contribution to the game.

Furthermore, the Jets extended the Safety’s contract by two years. However, he was a free agent the following year. After that, he joined the six-time Super Bowl champion team New England Patriots.

The Patriots bound the footballer in a two-year contract. Brooke is a big fan of the Pats and was extremely happy to serve the legendary team.

Some of the Career awards and achievements of Terrence are:

Terrence Brooks is married to Caitie Brooks. The two met at Florida State University. Caitie was a cheerleader while Brooks played for the Florida State Seminoles.

Furthermore, Terrence and Caitie started dating at FSU and are college sweethearts. They were the cutest couple in college. The pair were together for a long time before getting married in 2017.

The NFL Player With His Wife And Three Children

The married couple has a small and beautiful family together. Their first child, Carter, was born shortly after Brooks’ college graduation.

The NFL Safety played for Baltimore Ravens then. After a little while, they welcomed twins; their first daughter Hayden Brooks and their second son Kole Brooks.

Terrence Brooks Net Worth And Salary

Through his six years in the NFL, the footballer has earned a pretty good amount.

Although his exact wealth is yet to be calculated, his earning exceeds $6 million.

Besides that, many well-known brands and companies sponsor him. He has also appeared in ads for many of his sponsors.

Brooks owns a beautiful and lavish home where he resides with his family. Furthermore, he owns multiple cars and has a few possessions.

The NFL player is quite active on social media. He has an Instagram account with over 35 thousand followers.

Moreover, he shares very wholesome content through his account. The FSU player usually shares photos of his adorable children and stunning wife.

Besides that, he often posts football-related pictures. Brooks recently shared a photo of his oldest son tattooed on his body.

The father of three frequently uses his platform to raise awareness of racial injustice and racism in America. He significantly shares and tweets football-related news, highlights, and matches.

How many kids does Terrence Brooks have?

Terrence and Caitie together have three kids. Their first child, Carter, was born shortly after their college graduation. He is six years old as of 2022.

Recently they welcomed a set of twins; their first daughter Hayden Brooks and their second son Kole Brooks.

Yes, the NFL player is happily married to Caitie Brooks. Moreover, the couple is college sweethearts.

Caitie was a cheerleader for Florida State University, while Terrence was a part of the football team. The Brooks couple has been together for almost a decade now.

Besides that, the footballer credits his wife for being with him through thick and thin. She is his biggest supporter. Finally, they officially declared themselves as husband and wife in 2017.

Who is Terrence Brooks playing for?

Currently, Brooks serves as a safety for NFL team New England Patriots. Moreover, he signed a two-year contract with them in 2019.

Terrence played for the New York Jets. For his exceptional career with the Jets, he even received the AFC Defensive Player of the Week title.

He started his career with the Baltimore Ravens and had a four-year contract before joining the Philadelphia Eagles. Furthermore, he suffered an injury, which led him to miss a chunk of his rookie campaign.

What Position does Terrence Brooks play?

What is the Jersey number of Terrence Brooks?

What number was Terrence Brooks at Houston Texas?