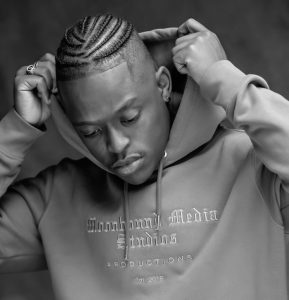 Thabo Mahlwele popularly known by his stage name as Touchline is a South African-born singer, songwriter and rapper. He was born in Hospital View, Tembisa, Ekurhuleni, South Africa

Touchline is one of the recent faces on South Africa’s music orbit. The songster combines the offices of a rapper, singer, and dancer. He used to play football but is now mostly associated with music and musicians.
Thabo Mahlwele is the birth name of the muso who has since become famous as Touchline. His encounter with music dates back to when he was a teenager. According to him, he started recording music when he was 17. That’s over ten years ago.
Before then, when he was 13, he was already writing lyrics in the tradition of the American rapper Eminem. He had wanted to play the keyboard at the same time and begged his parents to buy him one. However, he only learned to play the keyboard when he was much older.
Eminem wasn’t the only influence on him musically. In his teenage years, he was listening to the music of local champs like Linda Mkhize (PRO, also called ProKid) and ProVerb. ProKid’s music especially made him realize that music was his calling. So he plunged into music and has not looked back.
Football buffs who had watched Touchline’s evolution from football to music star will readily tell you that music stole Touchline from them.
The name Touchline was given to him thanks to his exploits on the field. In fact, the songster’s brother still thinks Touchline would have made a great football player. But Touchline had his eyes trained on a career in music.

As he would admit later, he delved into music because he thinks he would reach many people through the medium than through football. Looking back, it is not a decision he regrets. Music is already stamping his name in the hearts of the music-loving public.

Touchline has released many songs already, including “The 16 Flow,” “Still Here” and “Smokolo.” His most controversial track to date appears to be “Loolkat,” a song released at a time Mzansi rapper Okmalumekoolkat was facing sexual assault allegations abroad.

At the time the song was released, some fans had thought the song was praising sexual assault. But Touchline denied it was. According to him, he was merely harping on the fact that the rapper had not been given the recognition he deserved as an artiste.

For one who did well as a footballer and is still doing great as a rapper, singer and dancer, the girls surely wouldn’t be in short supply. On his relationship, however, the songster has been pretty quiet and one can’t point to who he is currently dating.

It has been said that the songster has chosen to focus on th music at this point and not on the girls. Either way, he appears to be winning in his music career.
As of 2022, Touchline is still single and not yet married.