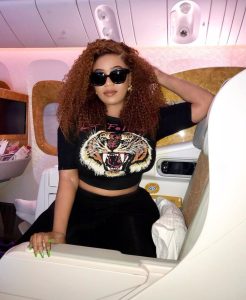 Vera Sidika Mung’asia (born 30 September 1989) is a Kenyan television and social media personality, celebrity, video vixen entrepreneur, and socialite. Born and raised in Mombasa, Sidika gained media attention in her career when she appeared in P-Unit’s single, “You Guy”, released in 2012. She has been voted as one of Africa’s and East Africa’s top video vixens. She is regarded as one of Kenya’s most controversial women due to her extraordinary and lavish lifestyle and unique opinions about life in general. In 2015, she and her fellow socialites began to appear in the reality television series Nairobi Diaries

Vera Sidika started her career at the age of 17 when she worked as a plus size model, participating in contests and fashion shows.
She moved to Nairobi in 2009 where she joined Kenyatta University with an intention to pursue her studies in art and design; this gave her an opportunity to fully take her career to the next level.

Sidika rose to fame in 2012 when she featured as the video girl in P-Unit’s single “You Guy”. In 2014, she appeared in Prezzo’s single, “My Gal”. In November 2015, she appeared as a video vixen in a video by Nigerian musicians KCSkiibii and Harrysong titled “Ebaeno”. She has been featured by The New York Post and BBC Africa.

In 2014, Sidika admitted that she had lightened her skin in the UK. She refuted claims that the procedure was not safe and could affect her medically. She said the procedure cost her over ksh15 million. She stated to anchor Larry Madowo, “My body is my business and it is a money-maker.”
Vera is married to singer Brown Mauzo. Not one to shy away from sharing personal details of her life, Sidika has also put a romantic touch on her marriage, claiming she conceived on Valentine’s Day. The couple welcomed their daughter, Asia Brown in 2021. Asia already has an Instagram with over 50, 000 followers managed by both parents.
Born 20.10.2021 at 10:21am
Vera Sidika & Brown Mauzo’s daughter Named after the largest continent on Earth