Ever since Wil Trapp made his breakthrough in high school soccer, everyone expected the young prodigy to become a star player in the MLS and the U.S men’s national team.

While many would have succumbed to the pressure of being in the limelight at such a young age, Trapp rose to the challenge as he has now become one of the best players in the MLS and for his national team. Furthermore, having served seven long years for his hometown club, Columbus Ohio, the 27-year-old recently moved to Inter Miami CF, where he will probably write a new history and break many more records.

However, that is in the future, and we are not here for that.

Instead, we are here to tell you about his past and present life, along with his career. You will also find details on his salary, net worth, age, height, wife, son, and social media.

So let’s begin with some quick facts.

Talking about his educational and early sporting career, Trapp attended Lincoln High School. Although Wil played just two years with the high school, his performances were so impressive that Lincoln High School decided to retire his jersey number 20 in 2014.

Most notably, the 27-year-old was an All-American in both those years while also leading the team to their first-ever state title in 2009.

Thereafter, Trapp spent some time at the U.S Soccer Development Academy and then attended the University of Akron in 2011.

Like in high school, Wil helped his college team win three MAC titles, two regular-season tournaments and qualified in the NCAA Tournament in both of his years with the Akron Zips.

Thus, after only two years with the University of Akron, Trapp decided to turn professional at the end of 2012.

Trapp began his professional career with hometown club Columbus Crew as a homegrown player. The Ohio native made a stunning debut against Portland Timbers in a 1-0 victory.

As a result, Wil bagged the man of the match award, which made his debut one to remember.

After that, he played another fifteen games for the club that season before earning the club’s Breakout Performer of the Year award.

Consequently, Columbus rewarded the youngster with the vice-captain’s responsibility for the following season.

Subsequently, the then 21-year-old broke many records in his second professional season. To illustrate, Trapp became the youngest player in MLS history to captain a team at just 21 years and 122 days.

In doing so, Will became the first Homegrown Player in the league’s history to hold the captain’s armband.

Besides, the 5 feet 8 midfielders scored his first professional goal against Houston Dynamo in a 2-2 draw on September 12, 2014.

Hence, after having a fantastic second season, Wil had high expectations to step up his game even further.

On the contrary, the U.S international suffered from various injuries in the 2015 season. As a consequence, Trapp missed a lot of games, which subsequently hampered his form. Nonetheless, the Ohio native managed to appear in 25 games, assisting one time.

However, the business was back to normal in the 2016 season as Wil earned his first MLS All-Start call-up.

In doing so, Trapp became the first-ever Homegrown Player in Columbus’ history to be named as an All-Star. Subsequently, Crews SC offered Trapp a contract extension, which he duly signed, that would keep him at the club till the 2020 season.

The following year, Trapp received probably the best achievement of his career to date when he got handed the captain’s armband in 2017.

As a result, the pressure was on the Ohio native to lead his team to better performances. And that is precisely what Wil did as he played in career-high 40 games.

The 5 feet 8 midfielders also bagged career-high five assists and three MLS team of the week nods in the process.

All in all, the 2017 year turned out to be very good for Wil on a personal level. After that, in 2018, Trapp remained captain of the team, helping them finish in the playoff spots.

Additionally, he also scored the second goal of his career in a 3-2 victory against Orlando City.

In fact, his near forty-yard strike was so impressive that it won the MLS Goal of the Week. After that, the U.S international spent another season with the Crews before moving to a new chapter in his career.

Nevertheless, by the time he finished his stint with Columbus, Wil had played in 205 games scoring two goals and providing 13 assists.

Thus, after seven years of service for his hometown club, Trapp got traded to the newly formed Inter Miami CF owned by footballing royalty, David Beckham.

As of now, only two games have been played in the MLS due to the world pandemic of Corona Virus (COVID-19), which has forced the league to be postponed until further notice.

Nevertheless, we have full faith in Trapp and his new club Inter Miami to perform very well once the season re-starts.

Wil was born in the year 1993, which makes him 27 years old currently. Likewise, he celebrates his birthday on the 15th of January, which makes his horoscope, Capricorn. 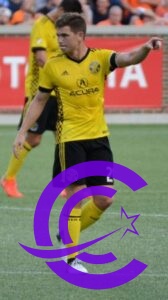 And, talking about his nationality, Trapp was born in Ohio, which makes him American by nationality.

Although Wil’s height is quite small for an American, he does not let it affect his gameplay. As a matter of fact, Trapp uses his short stature to change directions and pass to his open teammates quickly.

As of 2020, Trapp has a net worth of $1.5 million accrued mainly through his MLS playing career. Likewise, this is my seventh year as a professional for the U.S international. Hence, his net worth should come as no surprise.

Furthermore, Wil is currently making $593,000 per year with the Columbus Crew. Moreover, Trapp has earned over $2.1 million on salaries alone throughout his seven-year tenure in the MLS.

However, we believe that Wil’s big payday is still to come as he is yet to reach his potential.

Talking about his personal life, Wil is in a loving relationship with his wife, Beth Trapp. Moreover, the couple got married back in 2016 and celebrated their anniversary on the 17th of December.

Since then, the two have seen their love grow with each passing day with no signs of controversy.

In fact, the couple further solidified their marriage with the arrival of their son, Mijo Trapp, on October 20, 2019. Furthermore, the family of three is delighted, as suggested by Wil’s various posts on Instagram.

Which squad number does Wil Trapp feature in?

At present, Wil Trapp features number 29 for the Minnesota United FC. He has also been number 6 for Inter Miami FC and Columbus Crew SC. Not to mention, he was also number 20 and 29 for the Columbus Crew.