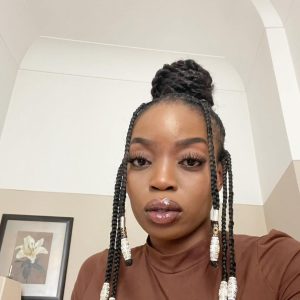 Zandile Zanda Zakuza (born 8 August 1993) is a South African house and kwaito singer and songwriter. Born and raised in Umlazi, she achieved widespread popularity after featuring on the singles “Skeleton Move” by Master KG and “Club Controller” (2019) by Prince Kaybee.

Zakuza was born and raised in Durban, KwaZulu-Natal but her family are from Bizana in the Eastern Cape.

She attended Pinetown Girls’ High School and later enrolled at the University of KwaZulu-Natal, where she studied music, specialising in jazz. Zanda left in her second year to pursue a music career; she, however, later returned to college to study business management and human resources.

At her early age she preferred dancing and sports then later engaged in music while in high school. During events when she performed, people at the event mostly shed tears due to the type of soul she always performed with.

After dropping out of university she made it clear that she spent a while without a job but before she was successful in music. She joined the industry in 2015 and signed a record deal with Open Mic Productions. On May 25, 2018, She released her debut studio album Synthia The Journey, was released. The album describes the life of her mother supporting her music career. The album includes collaboration from Bongo Beats, Spirit Banger, Dr Moruti and Doc Shebeleza. On October 3, 2020, her single “Khaya Lam” featuring Master KG and Prince Benza was released.

Zanda Zakuza as of 2022 is still single and not currently dating or in any relationship. Zanda Zakuza is also not yet married.